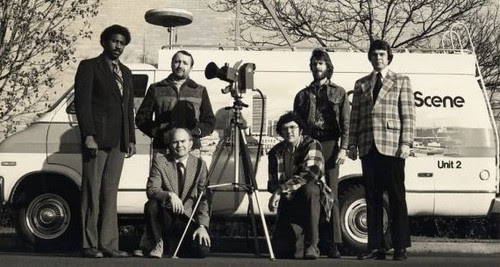 There are those who dabble in broadcasting and those who succumb to it. Greg Pell is of the latter. It's something I don't really think about when I run into him at crime scenes, but this pipe-smoking optimist has been manning a camera since Gerald Ford was stumbling up to the podium. For proof, dig the above artifact: there's Pell third from right, kneeling in front of a hopped up cargo van bristling with stickers and gizmos. It was 1976 and no doubt a proud day. Why else bring together such an esteemed group of hunter-gatherers. Koontz, Taylor, Stafford, Lawing - not to mention El Ocho elder Chuck Hemrick, standing stubbornly to the left of the - ahem - mini-cam. Sure, they look like extras from that Anchorman movie, (and if that's not Herb Tarlek's jacket I'll trade in my entire VHS collection of WKRP in Cincinnati), but this motley news crew was completely bad-ass, trolling the mean streets of the Queen City while I was doodling Jimmy Carter grins in my fourth grade textbook. That I now get to trade elbows with a few of these fellas is a deep kick indeed; especially when they drop a detail from back in the day, as Pell himself did when he pointed something out about this photo...

Note the Unit 2 on the truck. Unit 2 was the first and only truck for the first 6 months. We wanted to create the impression that we had 2 trucks while we were "flying the flag" around town. And we think TV news has (just lately) gotten too promotional?

I guess some things haven't changed.
Posted by Lenslinger at 5:25 PM 2 comments: 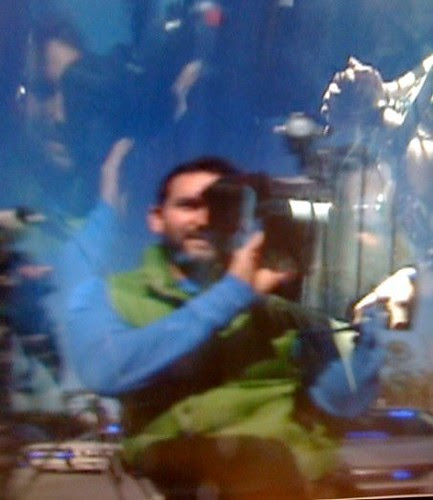 Chances are Joe Avary was fending off the competition when he thrust his lens toward a couple of fresh felons the other week. But the image he came away with will outlast any newscast. The handcuffed knuckles, the determined shooter, the idling squad cars... that's not a screen-grab, it's a Made for TV Movie! Then again, no after-school special can match the real word education Joey Flash is acquiring in his third TV market in almost as many years. Not so long ago this mercurial goofball was trapped under the tutelage of yours truly, serving a sentence at El Ocho as he launched his lenslinging career. Now, newly svelte and freshly focused, Joey can be found cruising the mean Peachtree Streets of Hotlanta, where he's no doubt impressing all with boundless energy and sprite like ways. Come to think of it, Atlanta has become a hotspot for Viewfinder BLUES enthusiasts: Richards, Bam-Bam, Kiggins, Channel, now Flash... I may just have to schedule a stop down there for Slinger-Con 2010 - a highly esteemed gathering I just now made up but really, really like the sound of...

Now up against the car! 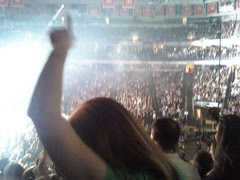 I didn't WANT to write about The Black Eyed Peas show. Heck, when my 12 year old daughter told me she won tickets, I wasn't even sure I wanted to GO. But go we did and five days later I'm STILL singing that infernal 'Boom Boom Pow' song under my breath. How did this happen? I used to hold The Peas in low regard, more than once referring to them as The Village People of the new millennium. But when your youngest scores two free lower level seats, you pocket your preference, go to the show and thank the Lord above the child didn't win tickets to The Jonas Brothers. 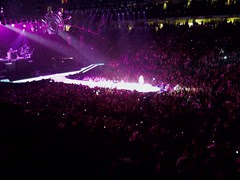 Odd group, The Black Eyed Peas. Only of them even sings, the other two rap, no one really dances and for the life of me I can't figure out what that Taboo dude does. But as a four headed monster, this cartoonish combo somehow clicks - whether forcing a pre-fab groove through both your earbuds or rising up through the stage floor like a troop of musical Super Friends. Before the smoke and lasers even cleared, Hannah and I were on our feet; she to dance, giggle and text, me to work the pins and needles out of a cramping hamstring. What followed was two hours of kick-ass stagecraft, fueled by a mostly live soundtrack of songs I was surprised I knew by heart. 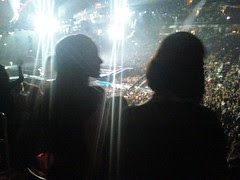 But enough of my warbling. Let's get to what's really on those manly minds out there: Fergie. A dazzling lass, that one. Between her one-handed headstands, maximum swagger and lady lovely humps, she offered every suburban Dads something to groove on from the safety of their seats -- even if half her vocals did sound like they were run through a tank of helium. That said, Fergie proved worthy of the love she engendered. Why, I found her 'Big Girls Don't Cry' downright spellbinding - if only because I would have sworn cash money that song was sung by Beyonce. Or Alicia. Or quite possibly that Beckham lady... Cadaver Spice, I think they call her. 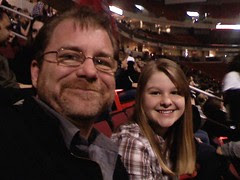 So there you have it: my full admission that by the time the last of the confetti fell over the RBC Center, I counted myself a fan. Sure, their music is befitting a junior high pep rally, their lyrics are about as introspective as a John Mayer tweet and they'll never be accused of nuanced song-craft... but with their spastic back-up dancers, goofy posturing and overall message of acceptance, The Black Eyed Peas are using their power for good and not evil. This parent really appreciates that. As for my daughter, she loved it - though she spent much of the concert texting her friends the song list, snapping these photos and trying to forget that the shadowy figure poppin' and lockin' right beside her was in fact, dear old Dad. 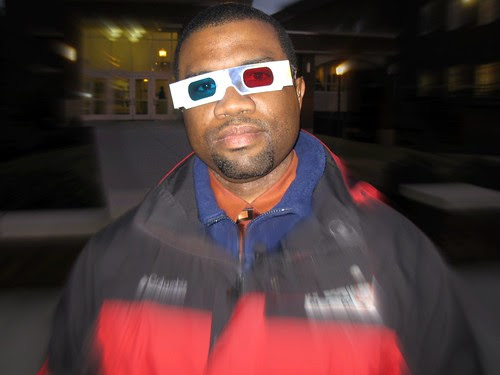 Local folks know him as a mild-mannered meteorologist, but the REAL Charles Ewing is a lightning bolt of chutzpah, opinion and style. Around the station we call him 'The Showstopper' - and not just because he interrupts football games to talk about low pressure systems. Of course, when he's not layin' down the weather, he can be found riding shotgun with any number of El Ocho's finest. That includes me. Over the years, we've dug through dumpsters, dined on the finest swine and fended off a fan or two. Charles get that a lot - but as an arbiter of cool AND a family man, he staves off the affection of green-screen junkies with slightly-chilled aplomb. But this hep-cat has claws, too. Once I inquired how long this rain might last and he threatened to garrote me with my very own Leatherman! Okay, so that never happened, but when you roll with a stone-cold prognosticator, you learn not to ask about the elements. So the next time you flip by your favorite forecaster, remember: there's more to the man than just some three degree guarantee...
Just ... don't ask him about his glasses. He swears they help him spot rain clouds...
Posted by Lenslinger at 11:31 PM 1 comment: