I hear the chase scene is AWESOME. 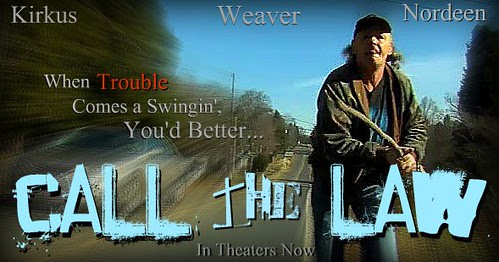 There's more to a life behind the lens than fending off rabid rednecks. Sometimes you get to go to fancy premieres! Okay, mostly you get to huddle outside fancy premieres with three dozen of your closest frenemies while the beautiful people parade past. Just ask Sean Browning, left coast lenslinger and proud new owner of a Go-Pro camera. That's the tiny POV device Sean used to snap this pic of the Oprah Winfrey Network Manufactured Red Carpet Affair. It's the glitzy debut of a whole new way of life! It's an event women everywhere have been waiting for! It's a rented parking lot with a custom backdrop! Oh well, at least no one started swingin' a 'Git-Stick' and cussin' like Yosemite Sam on a bender....

That is, until Steadman showed up.
Posted by Lenslinger at 10:33 PM No comments:

Since 2005, we here at The Lenslinger Institute have issued countless Schmuck Alerts: snide little jabs at ass-hats dumb enough to attacking a functioning fancycam. This one, however, is PERSONAL.

How could it NOT be, when founding member Chris Weaver is the victim of what can only be termed a felonious assault? Sadly, that's exactly what happened this afternoon when he and reporter Katie Nordeen found themselves on the side of the road in Davidson County. They were there following up on repeated claims of animal abuse; seems a local equine group noticed two horses they deemed malnourished. When a few phone calls didn't stir up much, Katie and Chris drove out to the address in question to have a look. Weaver was standing in the right of way of a public road, shooting video of the horses when a frothing crackpot straight out of a Stephen King novel rolled up and rolled up HARD.

Ya know, I though I'd met every type of unhappy customer there is. I don't remember ANY as unhinged as one Mr. Kirkus. In his world, it's perfectly acceptable to attack a cameraman if you perceive him to be your land, to go after him with a stick, to rant, rave and threaten in a manner that makes those Mel Gibson phone rants sound like the sweetest of all booty calls. Really, Mr. Kirkus - what universe do you live in where acting like a cartoon character is permitted? Did you think such behavior would all the queries about your suspiciously skinny horses? Are you as inbred as you look? Or did the greasy mullet and demented spittle come with the hat? Either way, you've got a lot more problems on your unwashed plate than mere neglected equine. You Sir, are facing two (2) Felonies. That's big city talk for 'little gray room'. I certainly hope you get to explore every crack and crevice of one real soon, for you appear to be little more an incoherent menace.

"He swung a few times hitting me on the lower right leg calf muscle and then on my camera lens as he swung the stick higher."

Unlike the near-murderous Mr. Kirkus, Chris Weaver was the essence of restraint. When the room went stupid, he kept his cool and followed the most basic tenant of Cameramanthropology: "Always Be Rollin'". Not only did Weave keep the red light glowing, he kept his own temper in check. That's no easy feat when a camouflaged madman is attempting to go agricultural on yer ass. But then Weaver's a pro. He knew anything more than self-defense would only agitate the jackal. He knew "the law" was on his side (and hopefully, on the way). Most of all, he knew the camera was recording EVERYTHING and rather than have to explain any lopsided drop-kicks, he'd be better off forgoing the heroics. That said, it is a pure act of providence that Kirkus backed off when he did, for it is the nature of grown men and detached tripod handles to want to strike back. I wasn't there of course, but I can tell you with great confidence that the Chris Weaver I know wasn't going to take another lick of that stick.

That's a rather charitable position, Chris. Others I know would have limped away, collapsed into a ditch and demanded at least few days off to grapple with the trauma of it all. Remind me to keep tabs on Kirkus' case as we make him the poster child for unhinged simpletons the world over. Schmuck!

Willard and The Kid 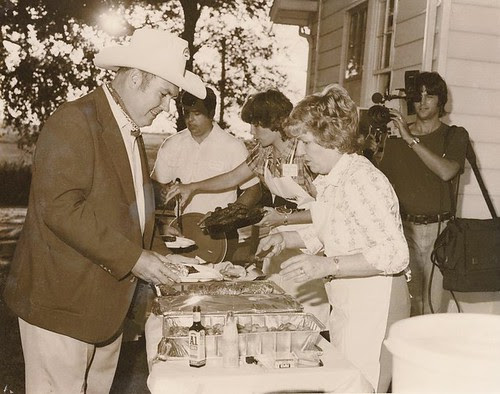 Sure, you got a Western-themed Willard Scott on the verge of his millionth free meal, but for all those seasoned lenslingers out there, this is a shot of technology lost. Just ask Mike Borland. He's the strapping young shooter in the corner there, the one so lovingly wrapped around that rusting-edge gear. Actually, it was pretty radical at the time. Just check out that Sony industrial with the sweet pistol grip. And that bag? He ain't goin' to the gym later. Not when he's spent the day schlepping a top-heavy cyclops on one shoulder and a VCR from the set of 'Mannix' on the other. Technically, it's a BVU-110 - but you can think of it as a straight-up hip-killa. It clicks! It whirs! It throws you off balance when you're stalking hammy weathermen! Speaking of ham, I sure hope Mike got something to eat before Willard upended that buffet. How else he gonna live to be a hundred?
Posted by Lenslinger at 8:11 PM No comments: 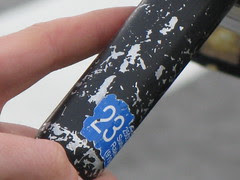 The old couple looked my way, their necks jerking in unison like two frightened birds. The woman’s thin lips curl into a sneer, but before she can say anything her husband deems me a degenerate and pulls her away. I smile as if they tipped me and let them pass.

‘Was it something I said?’ I ask myself. My tone, perhaps? I look down at my clothes and decide they’re perfectly suitable for approaching strangers in a parking lot. Unfazed, I glance around and spot three teenage girls walking out of the Old Navy. So lost in conversation about their very next text, they don’t notice me until I’m within arms reach.

“Hey ladies,” I say, waving the stick microphone I’ve been concealing in my sleeve, “Ya got a second to tell Channel 8 about your New Year’s Resolution?”

Minutes later, I’m still squinting through the lens as the high schoolers yammer on about their plans. I nod and act interested as they chirp in what can best be described as a foreign tongue. In truth, I’m not even listening to them. There’s no need to - not when the glowing red light in the corner of my screen and the dancing green audio lights tell me all I need to know. ‘WHEN will this be on?’, I hear them think. When they run out of complete sentences, I tell them. Tonight at Six. Only half a dozen hours before Twenty Ten runs out.

As they scamper off to text their friends, I scan the parking lot for any signs of a security guard. Amazingly, I don’t see one. Was a time I couldn’t wave a station bumper sticker around these parts without getting wrestled to the ground. Now, it appears I could shoot a reality show on the Ben and Jerry’s patio and not get hassled. Makes me glad I didn’t ask permission to be here.

Two men, both dressed in khaki pants and dark golf shirts head straight for me. They look like IT guys looking to score copier paper. I let them pass and center in on a trio of Goth Kids smoking on the corner.

“Wanna tell the local news what your New Years Resolution is? Guaranteed to piss someone off.”

They look at me like I just licked my eyelid, but I only gaze back. Twenty years of panhandling for sound has thickened my skin and lengthened my stare. But when they fail to utter an interesting syllable, I shrug and walk away. Guess Marilyn Manson fans don’t believe in promises - no matter how they try to convince Mom to change the wallpaper in their bedrooms. ‘No bother’ I think. Plenty of fish in the sea; plenty of gasbags in the parking lot. Just a few more on tape - er, disc, er, card and I can start my own New Year’s Eve ritual - which basically consists of avoiding shopping malls, strangers and microphones. Glancing at my watch, I try to do the math to see how much time I have left, but the numbers hurt my brain and I’m reminded why I’m holding a TV camera in the first place.

That’s when I spot them. An African-American family pouring out of the Barnes and Nobles; impeccably dressed, the youngest one in dreds. ‘Yahtzee’, I think as I heave my camera into first shoulder position and hit RECORD for what would be the final time that year...