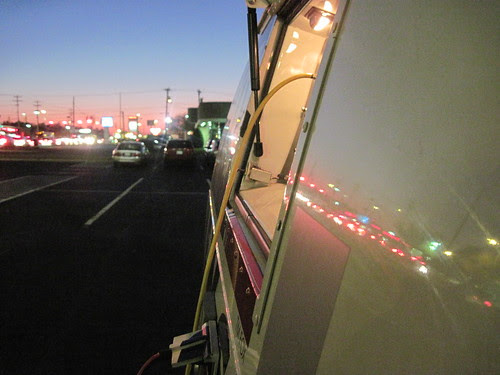 If you drove by a certain toiletries emporium the other night, you probably saw me leaning against that live truck. Truth is, I was barely hanging on. But you'd feign consciousness too, had your last eight hours been spent rushing headlong into happenstance. Most days, I dodge this kind of fruitless pursuit. Friday, I didn't have much of a choice. How it all came about never made much sense, but with a fresh deadline rapidly approaching and not a helluva lot else going on, logic is the first to fall. Which is why it's hard to explain just how exhausted I was as I watched traffic stream by my live shot. Who knows what all those motorists thought when they glanced my way? More than likely, they were just looking for someone famous. They couldn't have fathomed the truth: that a reporter they'd recognize was inside that very van collecting breast milk, that together we had launched and abandoned a hard-target search of every Christmas Tree lot in town, that we'd been saved from this insipid mission by some dude claiming to have a bomb in his duffel bag.

It all began in the morning meeting, when some well-meaning soul mentioned they thought they saw Christmas trees for sale on their morning commute. Exactly who foisted this deception isn't known, nor does it really matter. All that really matters is this simple fact: Before anyone could question the veracity of this unseasonable claim, the words 'Christmas Trees' were written under mine and a reporter's name. Somewhere down the hall, a guy in the Art Department began working on the over the shoulder 'Christmas Tree' graphic. The deed was done. Now all my reporter and I had to do was wrench reality in such a way that would fit the worldview of those who so rarely got outside. Did I mention the local tree lots stood empty? That the big box stores hadn't received their first shipment of former saplings? That even the local tree farm family was laying low until next week's Christmas Season kick-0ff? God knows I tried...

But to be fair, my words weren't worth a lot. I knew it too. In the world of morning meetings, a lousy idea still trumps nothing at all. So until I came up with something better to pitch, I was more than encouraged to swallow my opinion and go find some damn Christmas Trees. Besides, no one huddled around the conference room table believed such a story would ever make air. Surely some kind of spot news would crop up before the Six o Clock open rolled. A bus wreck, a meth-lab domestic, a demon sinkhole. Certainly something would crumble, jump up or erupt long before we took to the airwaves with tales of trees that weren't yet anywhere to be found. First though, we had to go through the motions - which means we had to hit every empty lot that's trafficked in trees since Bill and Hilary Clinton slept together on a regular basis. Hey, no one ever said this behind the scenes stuff was pretty!

We. Looked. Everywhere. Up and down the busiest thoroughfares, out behind Boy Scout huts, down around that garden center with the yard art out front. No matter where we went, we heard the same thing. This place will be hoppin' with trees this time next week. All seemed lost, until one of our many phone calls was returned. 'Yes', in fact, ' a few local Food Lions had trees on the premises and up for sale'. Without another word, my reporter and I raced to the nearest franchise and found a stash of unadorned trees leaning against the outer wall. Positive we'd hit pay dirt at last, we strode inside to congratulate the manager on his newfound free publicity. We expected him to go corporate. Instead, he went douche-bag and we were invited to take our cameras elsewhere. Knowing our chances of finding anymore cut trees was next to nil, I pointed my news unit due South. Thirty minutes away, the Spillman Christmas Tree Farm sat full but silent. The good people there hadn't answered their phone all day, but I was now prepared to drive straight there and take a hostage if that's what it took to get a cursed evergreen on tee-vee...

That's when it happened.

The Droid on my side blasted out a tone that told me the assignment editor had struck a vein. When I finally figured out how to make the newfangled phone stop ringing, the voice on the other end launched into a soliloquy. "Someone walked into the Bed Bath and Beyond on High Point Road and told the clerk he had a bomb. Stole some cash and the clerk's car ---" He didn't have to go any further. We raced to the store in question and found a cop car convention out front. The store folk weren't talking but the cops were feeling chatty. After no more than ten minutes on scene, we had everything were gonna get: shots of detectives smacking their gum, hardened shoppers rendered less than agog and enough store signage to remind everyone they're not even safe picking up a towel set for Grandma this Christmas. Laying in wait, we pounced on a few shoppers as they exited the store. We peppered them with questions. Did they want to be on camera wasn't one of them. Then, as quickly as we arrived, we left.

Two and a half hours later we returned, this time in a live truck. Since leaving earlier, we'd returned to the station, high-fived a producer or two over the sound news judgment and went to work on their new lead story. Not another word was said about Christmas Trees. Not with real news in the hopper. True, our story wouldn't change any lives. As robberies go, it was pretty inconsequential. Sure, the clerk lost her car and the company cash, but the average viewer would have to receive regular payments to even pretend to care. but the story of one loser's jihad against high thread count had more than enough to lead off a news cast. It had cop cars in the distance, a setting soccer moms knew well and, of yes, it had wordplay. 'Bed Bath and Bomb' the lower third graphic would no doubt read. The alliteration alone was worth it weight in promos. So as you can see, five hours of frantic effort can shatter upon impact when just a few minutes of the right kind of outrage presents itself in a timely manner.

I just wish the towel-hating bomb bandit would have struck a little earlier. Might have saved me a ton of runaround...
Posted by Lenslinger at 10:30 PM 1 comment:

Have Logo, Will Block Fire Lane 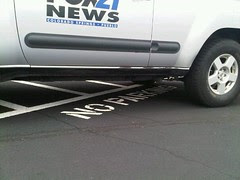 It's said to be the only true perk of broadcasting: the right to park like a putz. Actually, I've scoured the by-laws of our profession and can't find anything about free-range vehicle placement. But you can't rewrite history and neither can you convince some 20-something slacker he's not allowed to snake the Mayor's spot. It's been that way ever since a TV station first slathered a Packard with false promises. It's as if those early call letters bestowed the fleet that followed with an eternal, mysterious power to pull over anywhere we damn well pleased. Why is that? I'm guessing it had something to do with the heft of our weaponry. Back then, even the most basic gear induced hernias in 4 out of 5 photogs. Or is it because our very tools sparked panic/joy/loathing in the hearts of otherwise placid taxpayers? Perhaps. Even to this day, the citizenry affords news vehicles and the crews within them access they don't always deserve. It's the kind of thing you won't find me pointing out to the crime scene crowd as they step back to let me place my unit right up against the yellow tape.

These days, of course, I roll sans logo. The unmarked life has its merits. I can slow-cruise a shopping mall parking lot without tipping off the rent-a-cops. I can space out at a green light without the dude behind me threatening to kick my weatherman's ass. I can even drive past a liberal college's student union without a single overindulged neo-hippie kid flipping me off. It's all rather refreshing! But stealth has it's downside. No more rolling up to a house fire like an ambulance driver. Now I gotta go through a lot of windshield pantomime to convince the firefighting underling I'm not just some freelance looky-loo but instead am a respected member of the local media scum, er, scrum. Sure, I got a laminated sign with El Ocho's logo on it, but it's not just the same as driving a minivan wrapped in day-glow peacock feathers. Been there, and got a heckuva better spot for my troubles. Oh well, at least I can live vicariously through the infractions of others by visiting the latest Facebook group, Media Parking.

Basically, it's pictures of cars. News cars. From massive sat truck gatherings to a lone news unit's refusal to park like a mortal van, this ad-hoc collection of logo-mobile porn leaves me strangely titillated. Maybe I'm just pining for the old days, when I could commandeer some executive's parking lot perk without any real fear of retribution. Whatever the reason, I'm not alone in my fascination. Already a butt-load of vehicular pix have been uploaded and the admirers of said site increase with every click. I believe that to be just, for if I can't get get away with spot-squatting like I once could, it's refreshing to see others break all kinds of social mores in cyberspace. Hey, isn't that why the internet was invented in the first place? Don't answer that. In fact, don't move. There's a grandmother hunkered down in a Cushman nearby eyeballing us both while stroking her citation pad. As soon as I throw this baby in PARK, hop out and run for the front entrance. She can't ticket both of us...

Just be careful how you open the car door. Those fire hydrants leave a nasty mark.
Posted by Lenslinger at 11:44 PM 3 comments: 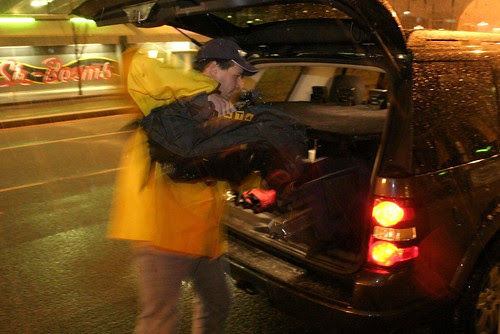 Who needs a gym membership when you schlep a camera everywhere you go? Even for a guy like me - whose current rig has all the heft of an empty shoebox - simple portage leaves me sore. Perhaps I should put together some kind of reality show exercise tape in which I'm flanked by two portly photogs in glistening wet rain suits. We could do the dead battery lunge, the hatchback slam, the cross country cable pull. Just imagine the plumber crack possibilities! If that's not enough, we could follow that up with a cooking segment using old Big Macs and room temperature energy drinks... Yeah, you're right - we should definitely work in the McRib. Maybe afterward, we'll cram everyone into an enclosed space the size of a live truck driver seat, hook electrodes up to everybody and see who can go the longest without passing gas. Unwanted exercise, a lousy diet, squelched flatulence - I'm telling you, it's Tee-Vee Gold! But what to name our new show... I guess 'The Biggest Loser' is officially taken. OOH! I know! We'll call it ...'Wednesday'

(Apologies to Corey Welch, whose kick-ass photo of freelance photographer Matt Gregoire got me thinkin'...)
Posted by Lenslinger at 12:21 PM 2 comments: