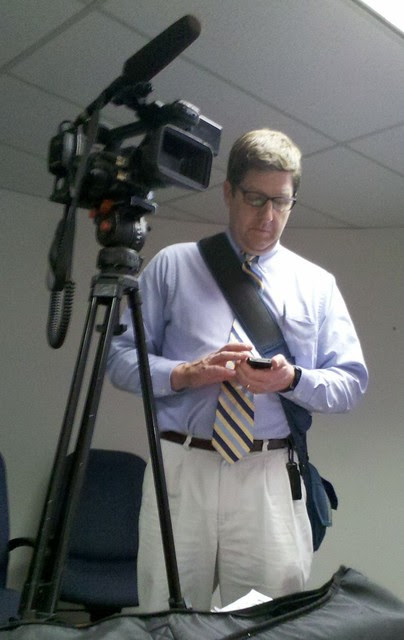 Faster than a producer's countdown! More powerful than a weatherman's Corvette! Able to leap Clerk of Court countertops in a most ungraceful bound! "Look! In the conference room! It's a Shooter! It's a Hair-do! It's ... That Guy from the Other Station! A strange visitor from another newsroom, who came to the Golden Valley's Upper Half-Circle with powers far beyond those of mortal one-man-bands! He can change the course of entire newscast with a single dead battery, bend KFC sporks in his bare hands, and who, disguised as a mild-mannered reporter for a medium-market TV affiliate, fights a never-ending battle for truth, justice, and a sit-down lunch every three days or so...


No, wait. It's just Mac Ingraham. Dude gets winded checking his Blackberry.
Posted by Lenslinger at 9:52 PM No comments: 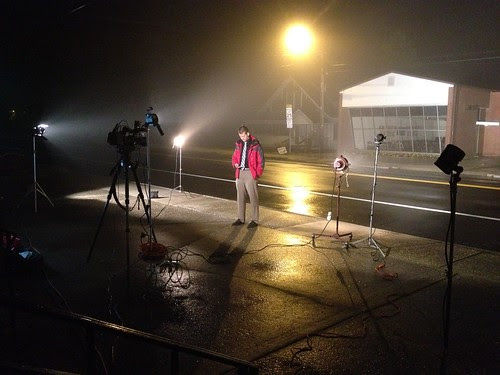 Top Ten Signs You're Using Too Many Lights on Your Live Shot...
10.) Rival street gangs show up and declare a dance-off.

7.) Every time you plug in that last extension cord, the stoplights flicker.

6.) Greenpeace protestors appear and begin shouting down your thoughtless destruction of our planet.

5.) Your live truck begins to rev and flex like that Delorean in Back to the Future.

4.) A reporter you haven't talked to in six years calls your cell phone to complain of burning retinas.

And the Number 1 Sign You're Using Too Many Lights on Your Live Shot...

1.) It almost looks like actual news.
Posted by Lenslinger at 7:34 AM 4 comments: 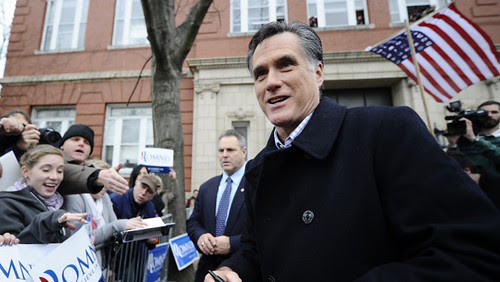 Leave that firm grasp of global trade policies at home, what you really need to cover a Presidential Election is a good step-stool. Just ask Joel Wade, New Hampshire news shooter and Senior Fellow of The Lenslinger Institute. That's him, wedged in the corner between Old Glory and Whats-His-Nuts. He didn't get there by accident. No, he'd driven ninety minutes, fought his way onto the riser and jacked his sticks just as high as they would go. And still that wasn't enough to see Democracy in action! You know, watching my colleague claw his way to the top of the scrum like that fills me with pride and turns my stomach. I abhor politics and having been stuck in small rooms with a various world leaders over the years, I got good reason. But more than the megalomaniacs themselves, it's the process that leaves me so deflated. Back in 2008, North Carolina was a battleground state. Jumpin' John McCain, all the Clintons and some cat named Barack swung (swang?) through the Piedmont so many times, I began to frisk myself just to save the Secret Service some time.  If that weren't enough, I never once saw anything come from these summits but empty posturing, kind of like the acting you've come to expect from Saturday morning infomercials. Even with Mr. Hope and Change, the theatrics were rehearsed down to the pensive head tilt struck every three and a half minutes from any one podium. Of course, had I not come prepared, I wouldn't have take away any impressions, other than the neck size of the network goob who invariably shows up at the last second and blocks my shot. Not Joel Wade...


When I got outside and saw the two-deep crowd along the cattle fence, I asked the reporter, Jenn Gannon to run back in and grab my stepstool so I could get above the crowd. That's why you can see me in that shot. I was about two feet above everyone's head.

Ahh, the lowly step-stool; once again making America safe for stagecraft and pageantry! To be fair though, these household ladders are good for more than eyeballing the future leader of the free world. I took one to an American Idol red carpet event in Hollywood once and could see clear over Simon Cowell's ego and directly into Paula Abdul's narcotic-induced haze. 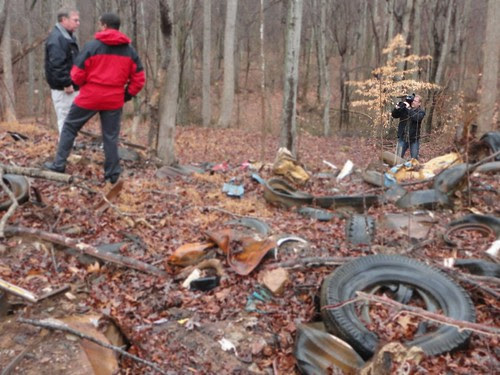 Remember kids: study hard, take your vitamins and you too could spend a drizzly January afternoon videotaping an illegal tire dump. Better yet, just do what I did: fail at everything else first until fate places you well below your station. For me, that station was a CBS affiliate I grew up watching, a charming little fixer-upper brimming with living legends and even crustier gear. I learned much there, In fact, I learned more during my four (plus) years at the Roy Park School of Broadcasting than I've picked up anywhere since. And that, ladies and germs, is increasingly the problem. See, there's a reason local news shooters don't bring down major coin: it ain't that hard. Yes, it takes a certain dexterity and an artistic bent never hurts, but when you get right down to it, the fundamental skills needed for news gathering are, well, fundamental.

Now, before you e-mail me copies of your doctorate in telecommunications, understand a couple of things: 1) I'm dealing in generalizations here and 2) I couldn't give less of a rip about your sheepskin. I've been outperforming better educated colleagues since before Bush the Elder yakked in that Prime Minister's lap. Back then, I thought I knew it all too but a not so funny thing happened on the way to total enlightenment... I began repeating myself. Ten thousand newscasts will do that to a fellow, no matter how many industry websites you write for. And while I know in my shriveled photog heart that I'm better now than I ever once dreamed of being, try telling that to the twenty-three year old co-worker who acts like he scaled Mount Vesuvius just because he called shotgun on his first cop car ride-along. Better yet, let him talk. It's only cosmic payback for the way you used to run your mouth.

Besides, he'll get his. I really can't say if local TV news (as we know it) will be around in twenty years, but if it is, I promise you the heavy lifting will be done by a handful of burn-outs who always meant to go design holograms or train robots or some other such nonsense, but never set the lens down long enough to pick up on anything else. See how this works? I didn't at first, but after climbing the corporate stepladder and realizing dress shoes hurt my feet, I came limping back, all too aware of the kind of Arrested Development that awaited me. Speaking of TV shows, touring today's tire pile with my pal Charles Ewing was like living through an episode of 'American Pickers' - without any chance of treasure but plenty of male bonding.  Mr. Ewing and I have many a misadventure. We've crashed gold mines, house fires and a few time-space continuums. All of which makes a colossal tire pile par for the course, sooo as we tried not to sucked into a vortex of moldy rubber we both had to laugh, knowing somewhere out there a nation of cubicle dwellers dreamed of the kind of assignments we've grown to loathe... 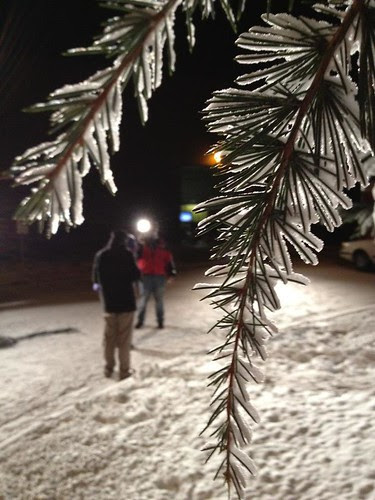 It's been a weirdly warm winter here in the Carolinas, the kind of thing we really don't mind so much. But with the lack of activity on the radar screen, some at El Ocho have started to mess with Mother Nature. We're talking straight up sorcery, bro. Okay, so it's a gizmo on a stick that throws fake snow in a semi-circle. Whadda YOU GUYS do for fun?  Don't bother sending the answer in a self-addressed stamp envelope - I'm all out of postcards. But even if I had some, I'd be hard pressed to come up with a prettier picture than this one, a frigid enough vista procured and delivered here by an unnamed operative of the Lenslinger Institute. Seems several heavily logo'd layabouts were seen skulking out back the other night. Details are sketchy, but ninety convenient minutes before the late news, "the white stuff" was seen falling by the satellite farm. This is indeed bad juju, the kind of ecological recklessness that leads to local newscasters using terms like "the white stuff", not to mention whatever weather deck apocalypse such a rash move could trigger.

Sure looks nice, though.
Posted by Lenslinger at 6:08 PM No comments: