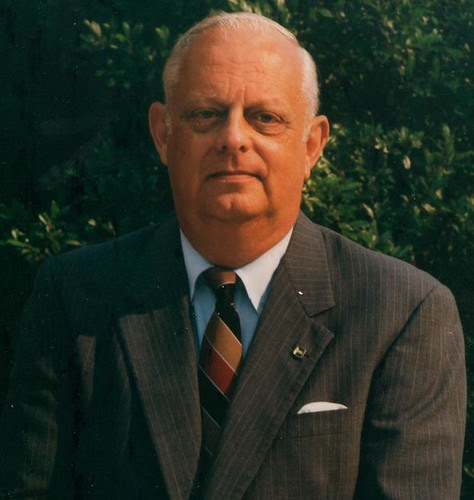 Roy Hardee, a journalist who chronicled the news of eastern North Carolina for more than 50 years through words, pictures and film, died in his wife's arms Thursday. He was 79... From his early stint as a one-man news operation to his storied career managing newsrooms, Hardee was a local television pioneer who always called his shot. In the beginning, Roy photographed, filmed, wrote, edited and anchored countless newscasts. After a successful sojourn into print, he returned to his broadcasting roots as WNCT-TV News Director and helped launch a thousand careers. One notable protege is CBS Chief National Correspondent Byron Pitts - who remembers Roy fondly in his recent book Step Out On Nothing.

-----
If WNCT-TV was my college, then Roy Hardee was its Professor Emeritus. Legendary, gruff and unapologetically old school, he probably didn't think much of the new production punk with the goofy 'do. But then fate intervened in the form of an unlikely hostage stand-off and I found myself manning the lead camera on the Story of the Year. This apparently impressed Roy, for a few days later he whisked me into the General Manager's office and offered me a job I didn't yet know I was applying for.

The fact that I did proves how seriously I took his offer, and in making me get a haircut, Roy Hardee added to his already long list of accomplishments: He mercy-killed a very bad mullet.

From there, my training began - all of it on the clock. A photographer at heart with scanner codes embedded in his DNA, Roy encouraged my burgeoning spot news skills. He also insisted I 'act like I had some sense', a new found skill which enabled me to fill my new Rolodex with the phone numbers of cops, politicians and crackpots. I didn't know it then, but I was being taught by The Master - for Roy Hardee seemed to know everyone important (or notorious) in the state and they him. For the first few years of my career, I found his name alone could get me into places my camera couldn't. When after a few months of shooting for reporters filled me with an urge to try it myself, Roy flatly challenged me to prove I could do it. Then he put me On-Air, long before I had any business darkening local TV sets around dinner time. Though never one to shower his people with praise, I got the distinct feeling Roy liked me. Once he arranged for me and my lens to ride along on a CH-53 SuperStallion attack helicopter - then teased me all week that I'd have a great story IF I made back down alive. Well, I did and no one made a bigger deal over the footage I brought back than my suddenly avuncular boss. Looking back I realize it wasn't so much me; Roy just loved the art of the grab.

I was 22 and full of myself. He was pushing 60 and had documented more of life than I'd yet to experience. Still, he treated me with begrudging respect - especially as I proved news was in my blood as well. I can still picture him sidling up to me in the newsroom. He'd jam his hands in his pockets and jingle his change, grumble something under his breath, clear his throat and apply some more ChapStick. I learned to read his mood by the condition of that ever present black and white tube. Not that he ever got too upset. In fact, I remember being regularly dumbfounded by his implacable demeanor. My home phone would ring in the middle of the night and a dead calm voice would intone, "There's a bunch of folks trapped in a burning warehouse downtown. Need you to go check it out." If he told me Martians had landed on the Town Commons and were demanding to be interviewed, I'd head there without question - figuring the aliens were like everyone else in town - somehow indebted to Roy Hardee.

It should be noted that I eventually quit my job at WNCT. Angry that others were getting better shifts than me, I left Roy a pissy note one night and walked out never to return. It was a punk move and I sure did regret it the next day. But Roy never held it against me - even when I showed up on the competition's newscast a few months later. I didn't yet know that equity was hard to come by in a newsroom and that constantly working nights and weekends were the price of admission. Roy surely did, but he never used his considerable influence to punish me for my youthful insolence. When I caught up with him at an alumni luncheon a few years back we had a laugh and it felt good almost being his equal.

You know, chasing the news of the day - and catching it - was the first thing I was ever good at and Roy Hardee told me so. Of course, he never pulled me into his office and raved about my latest collection of close-ups and cliches. But he did keep his eye on me and subtly let me know whenever I managed to do something right. Early one one summer evening around nine o clock, the scanners erupted with talk of a small plane crash on the Wayne-Greene County line. Having grown up not very far from there, I knew the remote location well - so I grabbed reporter Amy Burkette and jumped into whatever white Chevy Blazer I'd finagled the keys for that day. To make a short journey even shorter, let's just say I beat some of the firefighters there. Amy and I grabbed just enough sight and sound to tell the sad story before jumping back into our news unit and racing back to the station. That night, our story of the still smoking plane crash led the 11 o clock news.

The next day, Roy passed me in the hallway and just as he drew beside me he looked over and said two words I can still hear today: "Nice hustle." ...Understand I was a bit of a buffoon back then, often ignoring sound advice for fear I'd miss whatever smart-ass remark was about to burble up from my own lips. But Roy's brief praise left me thunderstruck, for something in his voice told me he KNEW what the word "Hustle" really meant.

So thanks, Roy. Thanks for granting me the chance to prove myself. Thanks for not firing me when I found exciting new ways to mess up. Thanks for all the tips on composition, glass and decorum. Thanks for not holding it against me when I let my young man's anger get the better of me. Thanks for giving me the best four years of my professional life. I've been using what you taught me ever since...


-----
A 'Press Conference' celebrating the life of Roy Hardee will be held at 2:00 pm on Saturday April 24th at the Hilton Hotel in Greenville, North Carolina. See you there...
Posted by Lenslinger at 8:31 PM 6 comments:

So there I was, shooting the hell out of some tornado wreckage when it happened again. I ... uh ... transported. Don't ask me how, 'cause I couldn't tell you. All I know is one moment I was zeroing in on a pile of jagged lumber and the next I'm sniffin' Starbucks. If that weren't alarming enough, the people suddenly sitting before me were engrossed in conversation. I'm pretty sure the blonde lady noticed me but I was too wigged out to acknowledge her - so I just kinda stood there. Luckily they were too engrossed in their iPhones to notice the old media vulture over their shoulder and eventually they wandered off. How DO you get guy-liner out of yellow plastic?

(Photo by Vincent J. Brown. My delusion in no way representative of actual shot.)
Posted by Lenslinger at 10:13 PM 1 comment: 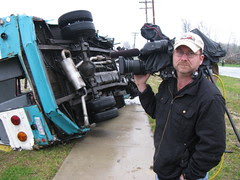 So how sexy is storm-chasing? The producers of Twister put Helen Hunt in a sports bra and it still kinda sucked. Which is why I dodge such assignments as if they were flying shards of sheet metal - which they frequently are. Take last night for instance. While dedicated chasers like, say, Weaver were out pointing their their news units into hundred mile an hour winds, I was hiding under my bed at home reading #tornado tweets. Was I 'laying low'? Like a corpse! Besides, as I burrowed my way under a few old blankets, I was comfortable in the knowledge that if the powers that be really needed me, they wouldn't hesitate to all. Which they did - er, didn't - about an hour before midnight.

Sunday night a a series of storms ripped through central North Carolina, spawning at least three tornadoes and destroying dozens of homes but not resulting in a single death.

All of which goes to explain why, - while you were still dreaming of lottery tickets and cheerleaders - I was nosing a loaded live truck past an unmanned barricade, driving slow to avoid downed power lines and seriously adolescent quest for free time. Ya know, if I hadn't been such a champion truant, I might be somebody by now; maybe a well-dressed and rested executive - instead of a wrinkled schlub with a station cap jammed over a bad case of bedhead; a beleaguered sort of chap with a sticky trigger finger and a penchant for parables. Still, would a well-heeled slicker know what it feels like to tiptoe through other people's broken hearts, to poke your lens in what used to be the living room of a stranger and ask them how their day is going.... I have - though I'd like to forget.

A word on tornado damage. Hailing from Eastern North Carolina as I do, I'm well familiar with the footprint of traveling winds. Down there, tornadoes and trailer parks mutually attract each other. Thus every flat land touchdown looks the same: like Godzilla ran loose on the set of Hee-Haw. But here in the Piedmont, tornadoes strike upscale communities as well, For whatever reason, that's always strikes me as strange, as if Mother Nature forgot to charge her GPS and plowed into the wrong neighborhood. Does that make any sense? Probably not, but when you've slept three hours and worked twelve, you're lucky the syllables stick together. Now if you'll excuse me, there's a cryogenic lean-to in my bedroom that needs my attention. It's constructed of old logowear, duct tape and a few sports bras I found in my run-bag.