Slingin' in the Rain 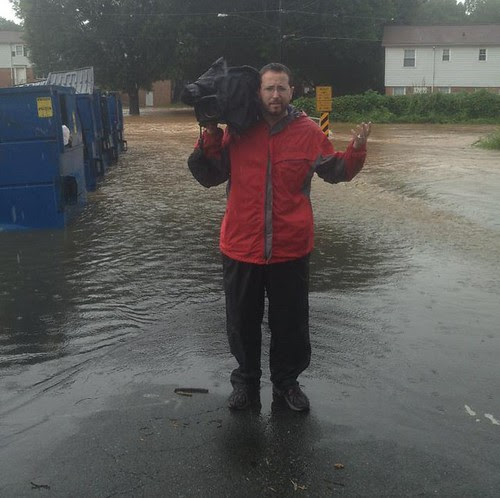 Up next on our runway, young Dustin Etheridge in a whip-smart ensemble that just screams professional regret! With his cherry red slicker and musty black trousers, this is one broadcaster who knows how to make a splash! Whether he's grilling a tipsy Senator, accosting shoppers outside his least favorite Wal-Mart or just plain dumpster-diving under heavy deadline, Dustin dazzles with a minimum of chafing! And those shoes! Sensible yet sassy, you'd never guess they spend most of their time buried in the floorboard of a nameless news unit. Which is exactly where you'll find this  strapping glass-handler - once he's fended off the affections of fans, a family of geese and that homeless woman with the Last Supper tattooed on her throat! Is it any wonder so many TV News types ape his trademark look (and smell)? Yes, the next time you're fleeing the island for higher ground, drop by that shabby hotel where the sat trucks gather and soak in the sartorial splendor! Oversized logo's, wrinkles that stink and enough ill-advised head-wear to make a once proud milliner slit his wrist! But you don't have to commit to a life of late shifts and dollar menu items to capture this look! Simply troll the discount bin at your local sporting goods store, stash what you score in a forgotten gym bag and you'll be dressed to impress the next time the News Gods take a dump on the Fourth Estate!

At least until Cantore shows up... Dude goes nowhere without a trunk full of windbreakers and shoe-lifts.
Posted by Lenslinger at 8:56 PM 4 comments:

There Doze My Hero... 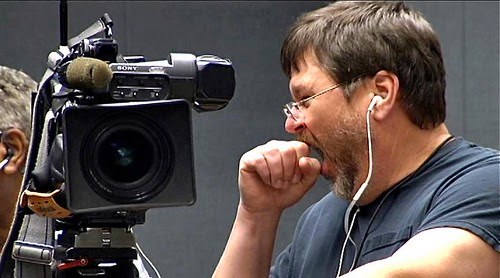 Faster than a crashing newscast, more powerful than an intern's optimism, able to stretch a single fender bender into thirty seconds of forgettable television. Look! Over there! It’s ... it's ... some poor camera dude struggling to stay awake. But take no pity on this mere mortal, for he's folded time on a daily basis, made sitting Presidents sweat and poked a thousand holes in the sky. We won't even talk about all the pretty people he's rescued.

Posing as Rex, a mild-mannered cameraman, our hero plods through his day without the benefit of tights and a cape (though his utility belt would make Aqua-Man sink). Instead, he fights for truth, justice and a decent lunch -- all while taken for a catatonic commoner. But don't fall for all the yawning. Beneath the surface, this unlikely everyman is bristling with super-kinetic energy, knowing at any time his Metropolis could fall victim to plague, pestilence or a six-part series on airport bathrooms that no one this side of Krypton wants to watch.

So take heed, miscreants! Should you be unlucky enough to stumble across this protector of the electorate, don't even nod in his direction. Otherwise, he'll pounce like a half-mad jungle cat, use his near X-ray vision to see your weakness and cast its reflection to the heavens and beyond. Before you know it, you'll be trapped in a satellite shot, explaining your own secret identity to the likes of Anderson Cooper.

Nobody wants that. We'd rather watch the airport bathroom thingie.
Posted by Lenslinger at 7:28 PM 1 comment: