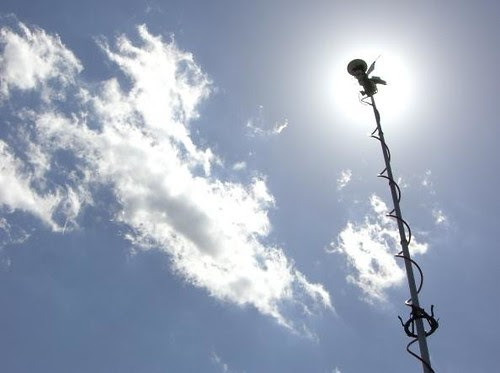 But when did that stop me? Besides, this heavenly shot by Nathan Parsons deserves some kind of write-up: Seen here in the wild, these temporary spires can be found alone and in clusters. Courthouse parking lots, interstate breakdown lanes, suburban sinkholes, there's almost nowhere these broadcast obelisks won't pop up. Often reaching apogee just around dusk, they then contract altogether, before reappearing in empty parking lots an hour shy of midnight. Me, I avoid 'em these towers of babble like the plague; but only because I almost O.D.'d once on generator exhaust and Cheesy Poofs. Don't ask. Just know that young Nathan laid a halo on this leaning steeple, bringing a sense of divinity to an otherwise ugly appendage.

Not bad for the new guy.
Posted by Lenslinger at 8:01 AM 3 comments:

Schmuck Alert: Run for the Border 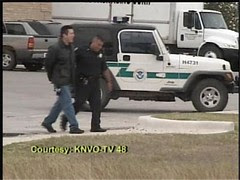 As proven by that friend of yours who can never hold his liquor, there's a Schmuck in every bunch. That includes law enforcement, where the efforts and rep of a whole department can be sullied by one cop with too much caffeine on board. Just ask Victor Castillo, an Action 4 News reporter who got cuffed and stuffed while covering a police pursuit in the Rio Grande Valley. Seems a drug investigation ended in a case of bent-sheet metal, creating the kind of scene you might watch on the evening news. That's when our man Victor rolled up with gear in tow and caught sight of cops unloading bundles of marijuana from the freshly-wrecked vehicle. Momentarily confused as to which side of the border he was on, Victor set up his camera on public property and did what a free member of the American media has every right to do: he quietly recorded the unfolding events from a reasonable distance. On its face it all seems pretty innocent, but Victor must have passed gas or made one too many doughnut jokes: for one officer took suddenly decided the Constitution wasn't a good enough reason to let some pesky news photog document the confiscation in question.

After exchanging less than pleasantries, the camera-toting Castillo backed off more than he really had to, but Office Bogart still didn't dig it - so he arrested the young interloper for committing television right there in front of God and everybody. Why the nerve! Anyway, knowing outrage when he saw it, the very angry cop placed the brazen photojournalist under arrest and charged him with interfering with public duties. Considering he was a good deal away from the action and surrounded by members of the public when he was arrested, Victor Castillo shouldn't have too much to worry about. For now though, he's still facing a Class B misdemeanor punishable up to six months in jail and a $2,000 fine - all for doing his job. What a country! Maybe someday all badge-wearing individuals will read the memo, brush up on the Fourth Estate or just get a freakin' clue! That way maybe we can avoid these predictable fits of testosterone. Until then, careful where you break out your camera; it just might win you a trip to the pokey. Schmuck!
Posted by Lenslinger at 8:48 PM No comments:

Remains of the Day 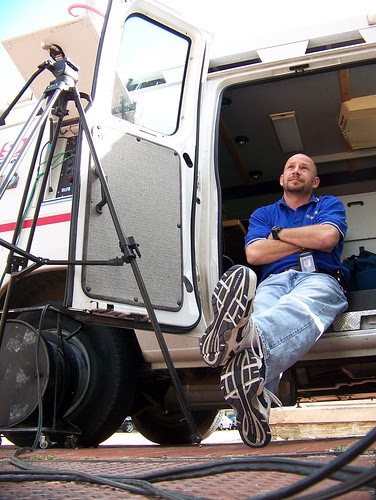 Nobody becomes a photog just so they can hang out all day. But take it from the Turdpolisher himself: Sit Happens. Yes, for every high speed chase, for every raging warehouse fire, for every floating airliner, there’s a couple hundred bouts of courtroom minutia to record. Trouble is, some states (and all federal) courthouses don’t allow prying lenses inside, a less than transparent policy that kicks the cameraman to the proverbial curb while his better-dressed partner yearns for a sketch artist inside. Time. Stands. Still. But how we handle that downtime illustrates the sometimes imperceptible difference between lifer and loser. Some folks polish their battery collection. Others simply text. I usually hunker down and strive for some reasonable state of Zen. That rarely works however, and I end up tossing pebbles at competitor’s live trucks. Not Louisiana’s own Rick Portier. He uses his quiet time to cook up some potent prose, fire off a few snapshots and find new ways to poke fun at his profession - without alienating his allies. It’s an odd hobby, but one that gives me plenty to read whenever I’m down and out in some half-dead live truck…

Provided I don't doze off first...
Posted by Lenslinger at 10:52 PM No comments:

I admit it: I lingered too long in the newsroom the other day, poking fun at the phone call you wanted me to turn into television. Sorry, but claims of stray dogs stuck under houses always crack me up. It’s not that I’m anti-canine, I ‘m just naturally skeptical. (Twenty years of chasing vapors will do that to a fella.) This time however, your instincts were dead-on and had I shagged over there just a little quicker, I would certainly have captured some memorable moments on camera. Instead, all I can offer is the following exchange; two true-life minutes that are now stuck on a loop inside my head…

“I’m sorry you came all the way out here,” the lady in the housecoat said, “but Horace already got that dawg out.”

“Really?” I asked, looking around for evidence of the imperiled pooch. I found none, but there was plenty else to look at there in the lady’s front yard. Cats, perhaps two dozen of them, roamed this way and that, peering out of the front window, cowering under nearby bushes, rubbing against my ankles.

“Yeah, the poor thing got stuck up under there this morning” she said, hiking a nicotine-stained thumb to the modest home behind her. “But he’s in the woods by now. Horace got him out.”

That’s when I noticed a flashlight’s weak beam shining from beneath the house’s crawlspace There, through a low square hole in the bricks, a greasy head of hair inched toward the opening. Horace, I presumed.

Following my gaze, the woman acknowledged her hero. “Didn’t take him but a minute to get him out. Said his collar was hung up on my ductwork. I gave him some food and he took off for the woods. The dawg, not Horace.”

I nodded as I watched the man of the hour turn his shoulders and shimmy out through a hole the size of a shoebox lid. Incredibly, the baseboard orifice birthed a pretty sizeable hillbilly. As Horace stood to his full height, he squinted at the stranger staring back at him. Lowering my gaze, I couldn’t help but notice the muddy skid mark on the front of his rebel flag t-shirt. Something in my subconscious clicked and I suddenly remembered the pick up truck I’d park behind a minute or so earlier sported mud flaps with the same set of Stars and Bars. That’s when I noticed Horace was looking at me, hard. Then he coughed up some long-lost lung nugget, hurled it into the dirt, reached for his millionth Winston and turned to the lady.

This seemed to bother the lady and for the first time she acknowledged the felines at her feet.” I just hate to hear an animal suffer. It’s why I got all these cats. I don’t go looking’ them. They must just follow their friends here.”

I nodded absent-mindedly, wondering how I was going to convince the producers that the great Stuck Dog Story of Aught Nine was a no-go. That got me to guessing how else I might spend the rest of this suddenly slow news-day. About then, I felt the burning stare of Horace as he searched my form for any sign of confederacy affiliation. Finding none, he turned his attention to my glasses, his forehead scrunching between unkempt eyebrows. Wondering if my bosses would be able to find my remains by tracing the memory of my GPS unit, I glanced nervously at the woodline, where the mystery dog was supposedly licking his woods. That’s when Horace uttered an offer I still can't seem to get outta my head...

“You want me to stick him back up under the house so you can get yer picture?”