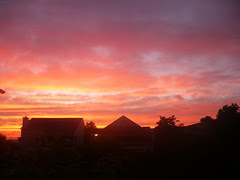 As you may have guessed from the lack of bile oozing from this site, I'm on vacation. Actually, I've gone underground; forsaking my fancycam for a fortnight while I live among the peoples here at Sunset Beach. And what a peoples! 'Tweens jacked to the gills on food they're usually not allowed to eat, Hollow-eyed Dads wandering lost among the dunes with furniture on their backs, old women staging surgical strikes on trinket emporiums, Moms barking orders as they slather their offspring in enough sunscreen to spot-strip a Buick. And then there's me: your surprisingly humble lenslinger lurking among the uncomfortably numb, my only protection from recognition (PFFFT!) a half-masticated straw cowboy hat. No, pictures are not forthcoming. In fact, every time someone's jammed a camera in my hand, I've passed it off to my children - who incidentally sling a mean lens themselves. For proof, dig the above sunrise shot captured by my 12year old - hours before her old man stumbled from his sleeping chambers in a pair of flowery shorts, sun-scorched torso and bunkbed-head. If that imagien isn't horrific enough, know that it won't be long before I shake off this delicious torpor and bag a few photos of my own. First, I gotta finish blowing up this wretched beach float. I just hope the kids don't ask why their plastic alligator smells like Maker's Mark....

Dump in the Distance 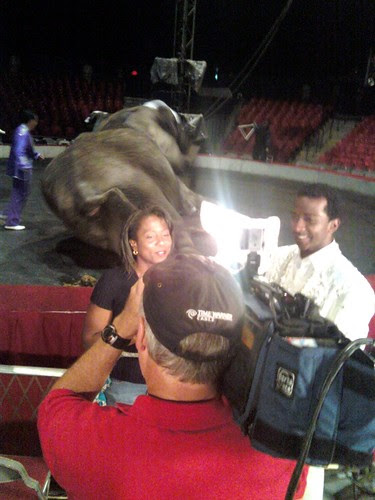 When you're a seasoned television professional, years of experience go into the lamest of live shots. Real-time analysis, borne of eons spent squinting at tiny screens appear in your peripheal vision. Thoughts like: "Crikey! That heffalump's about to off-load!" Such where the words that formed in the corner of my mind's eye Thursday morning - not long before I snapped this photo of Bill Welch dealing with the very same steamer. Narrowing his view considerably, the News 14 vet kept said defecation out of frame, ensuring local decorum - but depriving the world of one more viral video to snortle over at work. And you thought we just stood around with cameras on our shoulders...

Posted by Lenslinger at 9:10 PM No comments: 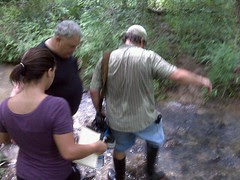 Ahhh, the slog - that inglorious task that some stories demand: body dumps, unplanned landings and everyone's favorite - the long-distance pot pull. Such was the case yesterday when a trio of co-workers took to the woods for a deputy-led dash through the brambles of Davidson County. I was recovering from my morning show steak shoot at Lucky 32 when the call came in: seems Grice and the boys found a sizable operation south of Denton. Any news crews wanna hike out to the site? I sank lower in my chair of course, but the trip that ensued reminded me of the good ole days; when chasing deputies with machetes was a buzz to be discovered... 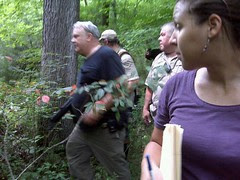 See, I cut my teeth on eradications. It was dawn of COPS and ride-alongs were all the rage. I was but a mullet in training; my mentors crusty one-man bands who picked the police blotter clean. They taught me how to forge good ole boy friendships with the high and tights. Soon my bag-phone rang with invitations to all kinds of Crown Vic conventions... late night drive-bys, prostitution stings, speed trap skeet shoots. All I had to do was get their good side. That's tough of course when you feel like your spleen is gonna explode if you have to forge one more briar patch. Call it the War on Drugs if you must, but after about a half mile of ass and elbows, you start to realize who the foot soldier is. 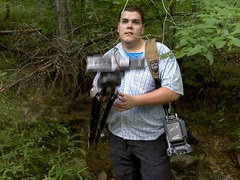 That's why we sent Kid Nathan. Fresh-faced and quip-lipped, he was just the youngster to trudge through the muck and bring back evidence of the demon weed. Actually, he was one of three (3!) El Ocho operatives on scene, but when you're sending a fella into a tick infested thicket with a hard deadline andthe possibility of being shot by a heavily jonesing stoner, you kinda have to pump him up. Me, I usually start with an anecdote or two about bustin' up moonshine stills back in the day, then move into meth lab territory. By the time I bring up the black helicopters and hard target take-downs, he's so ready to check off his bucket list, he'll carry everybody's tripod.

The Dirigible and the Dude

Q.) Why do so many photogs insist on dressing like tourists?

A.) Because they never know when a vacation's gonna break out.

Now I'm not saying this unidentified shooter didn't earn his pay that day. Hell, just keeping up with that Dave Malkoff guy requires some kind of stipend. But having hitched a ride on a flying bladder myself, I know the delights of dirigible flight. It's a great way to levitate; sort of like riding a minivan strapped to a cloud. When I went up ten years ago or so, it was courtesy of the Goodyear Tire Company. As I watched the pilot turn around in his seat and pass out personalized trading cards, it occurred me news photographers weren't the only ones with interesting jobs.

But enough about me. What's the story behind this fellow and his zeppelin? Dave?
Posted by Lenslinger at 5:26 PM No comments:

Iconoclasts of My Past 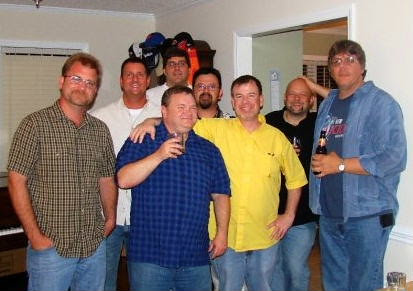 In all my excitement about the approaching coastal break, I neglected to report on an important rendezvous. But first, A Message To The Kids: Take note, Junior, You may think you're pretty radical now, but before you know it you too will be reluctant leaders of the Status quo (if you're lucky!). Take the above unfunky bunch. Sure, they're the very definition of harmless now, but once upon the 80's they were part of a freewheeling cabal, a loose-knit cell of insurgents hopped-up on Prog Rock, Marlboros and Meister Brau. Now, look at them: Chemists, IT Guys, educators, some boob who chases ribbon-cuttings for a living. Lame, I know - but it wasn't so long ago these operatives huddled under their mullets and congratulated each other on how charmingly prescient they all were. These days, most of them can embarrass their kids just by getting out of the car. Take a good long look, all you Jonas Brothers out there... this too could happen to you.

Now for what I learned: Goldsboro, North Carolina is a mostly unremarkable place. This very fact haunted me as youth; I cursed my forebearers continuously for landing me in what had to be the planet's most boring community. To this day, I hyperventilate a little whenever I cross into Goldsboro proper, for I have watched enough Wayne County corn grow to last a couple of lifetimes. But the older I get, the more I reconnect with survivors of that distant time , the more I'm forced to reconsider the merits of my homeland. For all its lack of intrigue, some of the most invigorating folks I know came from the home of Seymour Johnson Air Force Base. Knowing that my own experience is but a microcosm of a larger America, I'm momentarily convinced there is hope left for humanity. Then I go to work, sit in on a City Council Meeting and all those warm feelings melt away like so much spilled, cheap beer... the kind teenagers drink when they think nobody's looking.

Oh well, it was nice while it lasted.
Posted by Lenslinger at 9:59 AM 1 comment: