I’m taking a brief break from the blog so I can step back in time and attend my 20 year high school reunion. While I spend the weekend glossing over details of shenanigans past, there’s someone you need to know.

Meet Matt Jensen, rock-solid photog, Grateful Dead devotee and at times, a hard guy to love. But love him I do. From the very first day I sauntered into El Ocho, this 1970’s throwback and I quickly hit it off. Books, music, movies - our tastes may have differed but we shared a common language; the embittered, jargon-rich tongue of the grizzled lenslinger. For every angst-ridden yarn I spin, Matt could do me one better with a real-life war story from his time behind the glass. He’s also a righteous imbiber. His fortieth birthday bash from a few years back is one of my favorite Piedmont memories - even if I do recall only a few fuzzy frames of that crowded soiree.

Lately though, Matt and I have grown a little distant. Chalk it up to the competitive stress of prolonged camera combat. Or maybe it’s the by-product of two crusty souls not entirely happy with their ongoing plight. Whatever the reason, the gulf between us has truly bummed me out - for life’s far too fleeting to be pissy with those that matter the most. So consider this post an electronic step in the right direction, for aside from being one of my favorite humans, Matt is the quintessential TV news photog: surly observer, cynical lensmith, artist at heart. He may foster a caustic persona, but deep down inside he’s a real cream-puff, albeit one that would rip open your jugular if you entered his edit bay without first paying the proper respects. Consider yourself warned.
Posted by Lenslinger at 10:48 PM 4 comments:

Well, now I’ve done it - gone and robbed myself of any excuse ever to complain about my job again. In short, I’ve turned down a golden opportunity to leave the world of electronic newsgathering. Protocol prevents me from sharing the details, but let’s just say it was a rare chance to stay in television but out of the newsroom. Not too long ago I would have gladly gargled broken glass and Texas Pete to stage such an escape, but when it came time to ditch my fancy-cam and run, I just couldn’t do it. ‘Why’, you ask? Well, it’s kind of embarrassing, but you see...I’m a newsman.

That’s right, a newsman. Though I began my career producing used car lots and fat lady dress shop commercials, things didn’t really kick into high gear until I picked up a news camera. Suddenly, a blur of Easter egg hunts and drive-by shootings raced through my lens, holding my attention the way thrift store ads never really did. Of course, that newscast magnetism weakened over the next decade and a half. Crank out years and years of the same news cycle and you too will reach maximum burnout. It’s one of the reason so many of my gifted colleagues have sought ground higher than that of your average news set.

Despite all those defections, I’ve stuck with it - though at times I’ve displayed frighteningly embittered tendencies. I’m not particularly proud of it, but at the time raging at the machine felt quite justified. Still does, sometimes. Which is why it makes no sense that I pass up a chance to rid myself of the news unit shackles. That is, until my gut speaks up. Call it conscience, heart or Jiminy Cricket, we all have it - that insistent, interior voice that speaks with painful frankness. I’ve ignored mine a few times over the years and have suffered for my obstinacy. One particular example springs to mind...

At age 27, I was a one-man-band reporter/photog at my second station. Always more talented behind the camera than in front of it, I tortured the region nonetheless with nightly vignettes featuring my furry mug. It was great. I worked out of a bureau, far from the politics of the newsroom and relished the freedom and the friends I’d made at crime scenes and train wrecks. Problem was though, I felt abused. No matter how many breathless reports I filed, my lack of on-air polish destined me to a career of endless deadlines and damn few perks. Back then, I still held onto a dream of making it on-air - even though I was never very good at it. Meanwhile a bevy of overgroomed beauties came and went - all reaping the rewards of the star-making machine that a scruffy stutterer like myself would never enjoy. Slowly I realized I’d always be a foot-soldier in the War on News.

Which is why, I entertained the idea of a certain dark overlord. I was pounding out a script in my dumpy little bureau when the call came. A smarmy voice I’d come to loathe pitched an enticing scenario. ‘Wouldn’t I like to come to the promotions department and produce on-air ads for the station?’ The offer entailed a bit more money, but besides that - it presented a chance to escape what was beginning to feel like a dead-end career. My wife was expecting our first child at the time and the opportunity felt like the Right Thing To Do.

Without giving it too much thought, I said ‘Yes’ and hung up the phone. But I couldn’t let go of the receiver. Instead I could only stare at it as the annoying beep echoed through my small office. Over that particular din however, another sound ricocheted through my brain. “You‘ll regret this”, my small voice said, “You‘ll regret this…” And I did. After a couple of years of cranking out tripe for a jack-hole of a boss, I ran away screaming to a Piedmont newsroom. My foray down the hall taught me a lot, but it interrupted the trajectory of my career. It’s taken me years to make up for it. I swore back then I’d never again ignore that voice, for it most always knows better than I.

Now that I’ve been presented with another seemingly easy escape, that same voice is screaming at me. I’d be a fool not to listen, even if it does seem intent on keeping me mired in the highly stressful world of TV news. Someday the right offer will come along and I’ll happily fork over my keys to Unit 4 and the freedom it affords me. This however, ain’t it. Or so I’m told. Oh - as for that ‘never complaining about my job again’ shtick? Don’t hold me too it. The next time a deadline or a live truck acts up, I reserve the right to go nuclear, for despite my celebrated lack of sheepskin, I hold a Masters Degree in Bitch and Moan.
Posted by Lenslinger at 7:29 AM 4 comments:

Adventures of a Beltway VJ 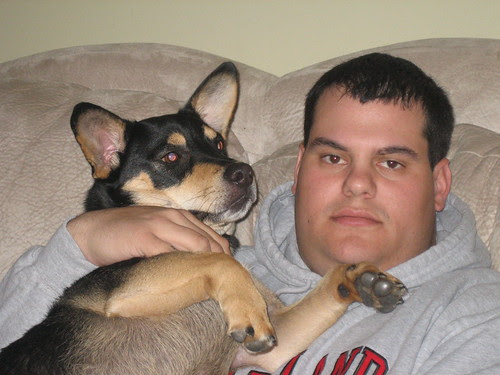 Ladies and gentlemen, I give you Mitch. He's the one on the right - a hulking marshmallow of a guy who, until very recently, demanded of me countless bumps, endless teases and a myriad of evening re-cuts. Not an easy task, when Yours Truly is trying to slither out the door. But as tough a gig as his editor's position proved to be, young Mitchell yearned for something even more punishing. He wanted to be...a photog. And not just any photog, either - but one of those newfangled models that not only shoots video, but gathers facts, writes scripts and appears ON Camera. That's right, our boy's gonna be a VeeJay!

Now put down that urine-balloon, Mr. 'Senior Staff Shooter'. Just because you made your bones in an simpler time doesn't mean our man Mitch should. He'd be a fool not to hone every skill he's yet to possess - from camera-handling to adverb-tweakage to those frazzled laptop-endectomies that separate the finessed from the fat-fingered. Why, I told Mitch as much and so did others. With his most adamant career advice coming from a bunch of grown men dressed like fourteen year old tourists, he was right to cipher on it a bit. When we announced his decision, we all feigned concern and briefly considered toilet-papering his car. But with his towering stature in mind, we thought better of it and - after a intense session of Rock/Paper/Scissors - took turns shaking his ham-sized hand.

Now that Mitch is lodged just outside Capitol City, his VeeJay-ification is firmly underway. Best of all, he's launched an already entertaining blog! So do drop by and give him Lenslinger's regards. But be nice! Dude is huge...
Posted by Lenslinger at 7:51 PM No comments:

Schmuck Watch: Kenny's on the Mound

Detroit Tigers pitcher Kenny Rogers is reportedly bringin' the heat in this year's World Series and we here at Viewfinder Blues couldn't be more dismayed. Why? The man's a knuckle dragging oaf - an overpaid barbarian short on chromosomes and prone to childish tantrums. How else can you explain his intense hatred of TV cameras - the very tools that help publicize his globe-shattering ability to ... throw a ball really fast? Without those ubiquitous lenses, chances are this pampered millionaire would be back in Whose-ville, peppering underage bat girls with pockmarked softballs whenever things didn't go well on his hometown mound. Instead he enjoys the jet-set adulation of the super-rich, all while turning the act of being a complete ass into performance art. In other words, Me No-Likee Kenny Rogers. It's because of that eloquent thesis that I will force myself to keep a distant eye on the World Series - an athletic event I'm usually only dimly aware of - if only because it rids my station of evening newscasts every October. So be on notice, Frankenstein, cause I'm watching YOU! Hopefully St. Louis will send you back to the lab, but if you do happen to win this thing, I'll be the first to duck - should all that bottled jock-juice causes your neckbolts to shoot across the infield and take out some hapless print reporter. Schmuck!