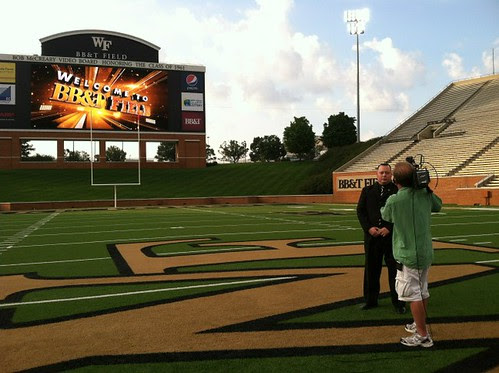 In a very special episode of Highway to Hellfire, an aging cameraman gets a second shot at happiness after a mysterious man in black shows him all the reasons for his discontent. The redemption begins when the portly escort shows the news veteran what a mess he's left in his wake. Dispirited interns,  greasy heaps of fast food wrappers, piles of poor career choices ... it's depressing stuff, even for a show known for its pioneering use of flying drone-cams during the inevitable intervention sequence. Yes, you haven't been truly entertained until you've watched a chain-smoking binge-eater get dived-bombed by a tiny helicopter while fishing around in a giant purse for cigarettes and Twinkies. But there are no such shenanigans in tonight's episode, for the TV tower the frazzled photog eventually climbs is just too darn high for remote control aircraft. In the end, the shaken news shooter gives up his perch, surrenders to authorities and is dragged away to a small padded cell - where the only stories he'll turn are the many parables he'll share with flock of imaginary grasshoppers. Deemed too graphic by the same focus group that green-lit 'Prison Gimp Diaries' and 'Restroom Confessions 6', producers shelved the entire series, black-balling any colleagues who believed a real life TV News photographer would make for a sympathetic character. In the end, the "That Damn Cameraman!" episode of H to H would be its last and is even credited with ending the whole 'Crappy Job/Mystery Boss/Tacky Payback genre.

Guess it wasn't such a bad show after all...
Posted by Lenslinger at 9:06 PM 2 comments: