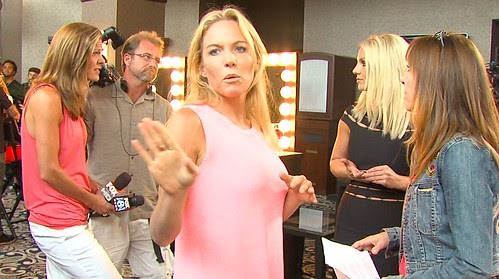 While my reliance on a stipend prevents me from divulging ALL that I saw this past week, I can tell you that I ventured deep into the heart of artifice. That's right, I crashed The X Factor. Actually, it crashed us. For three days, Simon Cowell's circus camped out at the coliseum, drawing finalists and fans alike for a surprisingly strong string of performances. I sat through a couple of the live tapings and while I'd watched not a frame of the show's first season, I found myself unreasonably entertained. Maybe it was the way Demi Lovato kept putting Simon in his place. Or the way Britney glimmered. Or how L.A. Reid never once said "Dawg". Whatever it was, I'd like to apologize to my daughters for any spasmodic arrhythmia I exhibited once the Captain and Tennille medley started. What can I say? That scuba diver could really sing.

But cushy seats amid a sea of 'tweens was only the beginning. The publicity people really outdid themselves, granting Shannon Smith and me staggering access to the show's contestants, crew and, yes, celebrity judges. Much of what I witnessed was erased from my memory banks the moment I turned in my press-pass. All I remember is some goon in a windbreaker sticking a flashy laser thing in my face. Next thing I know I'm outside in the parking lot, fumbling with my live truck keys. Still, I've soaked my forehead in bourbon long enough to bring a few memories to the surface and while I still can't explain why I have an incessant urge to sing karaoke, a few truths ring clear...

America's youth is still greatly persuaded by a certain prickly Brit in a too-tight t-shirt. Kids of every age credited the middle-aged millionaire for 'keeping it real'. As for Simon himself, the man seems far happier running the show, instead of just fondling his lighter while Paula Abdul breathed into a paper bag. I even saw him smile once. Once.

Britney Spears' name looks great on a marquee, but Demi Lovato is the real scene stealer. Granted, I didn't know who the hell she was before this week, but after watching her part a sea of teenagers with the bat of a single eyelash, I consider myself a fan. Most of all, I enjoyed watching her bust Simon's chops while coming off as the biggest star in a very crowded room.

The lust for highly-contained fame remains at epidemic levels. Many years now after Idol convinced a nation of children that warbling outdated show tunes was really kind of rock and roll, the Millennials are still in lock-step with these now fully ordained taste makers. In better news, your favorite Jazz club is now more spacious than ever.  Be sure to tip the waitress.


Well, there you have it: more than I planned to write about my latest brush with prefabricated talent show cavalcades. What will it all mean now that American Idol is shedding celebrities faster than those Deadliest Catch captains go through greenhorns? Ya got me. All I know is America's obsession with disposable fame is still going strong and no matter the name of its latest incarnation, the folks who sleep in their cars so they can massacre some overdone dirge in the morning still exhibit that same blend of starry-eyed ingenue and head-on collision victim.

What better recipe for television?
Posted by Lenslinger at 9:23 PM 1 comment: 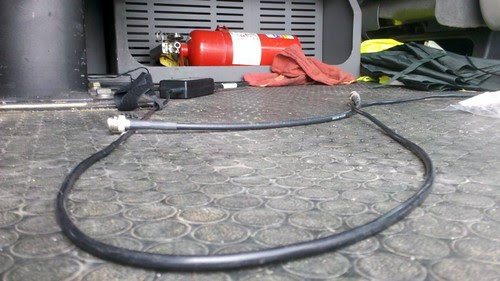 Their hides may be slathered in bluster, but the interior of a TV station live truck has al the charms of a bus station urinal. I should know. I've done more time inside these rolling dumpsters than I have in church and while my soul may suffer for it, it's that goo on my shoe that really worries me. It could be anything... Dried up mudslide. Petrified press release. The brittle husks of a thousand hambones' hopes and dreams. On second thought, I think it's guacamole dip. Or at least it used to be. Whatever the case, it's more than this neat freak can abide, which is why I keep my socks dry and my skivvies tight whenever I pilot one of these lumbering news Hueys. Look there, on the floorboard. Are those raisins? I sure as hell hope so. Otherwise, I'm taking the closest car wash nozzle to this, ahem, mobile newsroom.

'Mobile news room'. The very term is as dated as it is hated, now that technology has shrunk the office equipment needed to collate the day's events. Seem, what used to be a wall of high-end video decks held together by tubes and clamps has been replaced by a single Mac book and an external hard drive or two. What used to resemble a miniature mission control now looks like a holding cell with a laptop chained to the counter. Pretty soon, we'll all be transmitting live data from our eyelid implants and the idea of a trundled-up mini-bus stuffed with moving parts will seem as antiquated as the news reel ephemera Amanda Emily unearths. Me, I'm more heretic than historian, which is why I like to wear a surgical mask whenever I find myself tossing tools into one of these fetid vessels. I'd just as soon lick a Cineplex floor than hunker down among the remnants of deadlines spent. It may sound sexy, but until you've written an entire script in chicken nugget crumbs, you'll never know the unmistakable musk of a million made slots.

So if you don't mind, I have specimens to collect. I'm working on a pilot idea and I want that  special blend of neglected spit cup and pot bust flotsam to seal the pitch. The way I see it, I'll hire two tattooed lunkheads to travel around under the auspices of broadcasting. They'll hassle rent-a-cops, get into adventures, solve crimes and thoroughly gross out any and everyone who happens to peek inside their rolling news lab. Think 'Lou Grant' meets' Dexter'. Or 'The Newsroom' as interpreted by those guys from Jack-Ass. Either way you'll know I'm onto something when everyone knows the icky thump of a treasured tripod covered in Chex-Mix, road dust and desperation. Meanwhile, I'll try not to look at the floor the next time I wake up inside of these war-wagons, for if that's not the rotting carcass of an intern's brittle ambition over there in the corner, I'll stop spritzing the place with holy water.

Now hold this crucifix while I drive...
Posted by Lenslinger at 9:51 PM 2 comments: