Riff on a Glyph

When David R. Busse fished this photo out of a Louisville dumpster some twenty-eight years ago, he rescued a treasure. For on this papyrus lies an image so fraught with newscaster hubris that I nearly fell off my bar stool when I saw it... 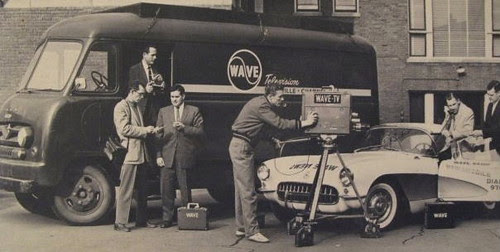 Libraries have been penned about Murrow and the Boys, dashing correspondents who trod the globe for network perks and a shot at immortality. But I yearn for TV tales from the local front where native sons applied the ethos of Edward R. to the local five and dime. Imagine the thrill of our early pioneers as they strove to illustrate radio for the first time. Flickering pictures Crackling sound! Photogs in pleated slacks! The Golden Age of Television? For some! All the sepia tone in the world can't fix an image this strikingly white. But nightly news tends to reflect society, not improve it. So don't blame these Brill-Creamed Broadcasters for the lack of diversity; they've driven too many station cars the size of bread trucks through dicey neighborhoods to look at life from just one point of view. When they weren't inventing TV News, they were thrusting new ideas on the people all around them, and creating a broadcasting curriculum still taught in schools, practiced in the field and mined for yucks on The Daily Show...

Not bad for a buncha fellas in scratchy wool suits.
Posted by Lenslinger at 7:20 AM 2 comments:

“Can you please hold the picture still?” from a WAGA photog to a woman holding a picture of her murdered child. Upset… she was showing a picture she carried with her all the time of her daughter… confronted in front of a deadline addled TV crew… crying… she holds the picture out in her trembling hands. I zoom in… hold the shot for 5 secs and pan up to get the facial expression of the woman. The reporter I’m with gets that….but before we could tap into the emotion of the situation… here…goes the cameraman mentioned above.

“Hold it steady!!! Please!!” The woman then pulls back and her husband grabs her and pulls her away.

Yes, yes he is. But so's anybody who lets a press-pass around their neck or a logo on their tit convince them their deadline is more important than the little people in the viewfinder screen. I've said before the most flippant cynics in broadcasting are those who never leave the newsroom. I stand by that, but it's certainly true many a misanthropist can be found in the field. Usually though, we behave ourselves in front of civilians. Usually.

A word on Live Apartment Fire. I first became aware of this site after the author featured me back in September. But even after that particular rush faded, I've continued to visit, for L.A.F. sports the kind of snarky insight found only in a jaded veteran of television news. Give it a click and get an idea of the kind of blog I'd write if I didn't have to depend on an affiliate for my legal tender. On second thought, no I wouldn't. That kind of thing would require me to watch local news. I don't do that now and I ain't about to start now. YOU however, should ingest at least three hours a day of local broadcasting - preferably of the El Ocho variety. (How else am I gonna feed my offspring?)
Posted by Lenslinger at 11:42 PM 3 comments:

"Film school, Schmilm school, how fast can you walk backwards?" Okay, I’ve never actually asked that of a new photog, but I’ve wanted to a time or ten. It’s not that lighting, composition and pace aren’t important; they are. But all the burnished cinematography in the world doesn’t mean squat if you can’t make slot. ‘Slot’: that’s teeveese for ‘you get to come back to work tomorrow’. Of course, those outside TV News would call it a deadline; but we behind your local lens have a had time wrapping our brains around the D-Word. (It’s like asking an Eskimo his native word for ’Snow‘;. Dude - you’ve got to be more specific.) In our world, everything is on deadline, turn-around times shrink every day and tomorrow doesn’t exist. As paradigms go, it’s kind of rushed - but the modern news photographer’s penchant for haste may be the one trait that keeps them employed in 2009 - the year that (I predict) will do down in the annals of broadcasting as the Beginning of the End.

See, the coffers are running dry. Now that Obama’s the President-Elect, there are simply no more political attack ads from which to gorge on. Couple that with quantum-leap technology and an economic forecast that reads like the book of Revelations and you sir have a shifting of the plates beneath the Fourth Estate. So how do you keep from getting swallowed into that gaping broadcast morass? Do what TV News photogs do best: Hustle. That is, after all, what separates us from the latte-swilling cinema geeks down at the independent film fest. Those cats are artistes, no doubt: they got the turtlenecks and Tarantino fetish to prove it. You, Mr. (or Ms.) TV News Photog, are merely first responders. You know like those E.M.T.’s we race to fender-benders all the time. It’s nothing to be ashamed of! The world needs people who can capture reality and deliver it to the masses - all before the tow trucks have dragged away all those sheet-metal cadavers.

I’m reminded of what my pals down in the Promotions department say. Actually, I kind of fade out when folks who lean on drink machines for a living tell me how television news should be. Don’t get me wrong. Those people got SKILLZ! But until they can drop in on a 4 o clock press conference and have it sliced, diced, fed and lit by the opening of the 5 o clock news, I’ll invite them to step aside, for I’d rather bum-rush a hostile news story than baby-sit a needy client any day. How else am I going to stay fit and/or relevant for the coming footrace? See, new toys and shrinking budgets are about to thin our herd considerably. If I were more of a techie I’d list the ten new machines you needed to master, but instead all I can tell you is to take pride in your accelerated pace. Know that it takes verve and a real set of grapes to dash in to happenstance and stick a lens in it, to ‘move through the room like an ambulance driver’. So cheer up fretful photog: your ability to backpedal before freshly made felons without slamming into a wall just may save your bacon, er paycheck.

But doing it while dressed like you just stumbled off a booze cruise? Now you’re just showing off…
Posted by Lenslinger at 11:53 PM 5 comments: 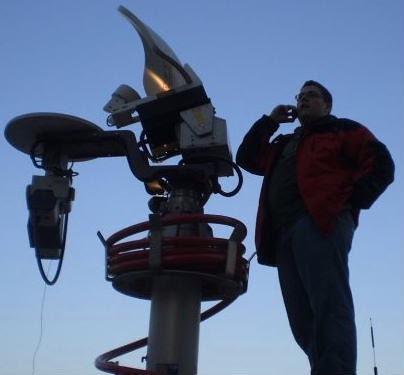 "Chief? Yeah, hey, uh - sorry to bother you at home like this but, see I've made a little - AHEM - adjustment to Live 13. It's the damndest thing, really. There we were pullin' out of the hood when this monster squirrel ran right out in front of God and everybody. I swear, I've never seen a rodent move like that, he was poppin' and lockin' and throwin' gang signs! Anyway, I was lookin' real hard at him when I noticed the nice folks we'd just interviewed in my sideview mirror. They were waving their hands and jumping up and down all crazy-like. Pfft, I figured they'd never seen a squirrel like that either. I asked Rex what he thought they were freakin' out about, but he was too busy texting his life-coach to be much help. That's when the most God-awful sound rang out! Sort of like a baseball bat to a microwave oven! I'm telling ya, it was SICK! Anyhoo, I slammed on the brakes, Rex about ate his Blackberry and I swear that squirrel flipped me off! So - uh, I climbed out of the live truck and looked up and sure enough the dish was all cock-eyed! Who knew a branch that size could do that kind of damage? I bet the engineers are gonna have to --- Hmm?

Well yeah, I guess my locker could use some cleaning out..."
Posted by Lenslinger at 9:32 PM 8 comments: