"I know what you're thinking. 'Is he monitoring six frequencies or only five?" Well, to tell you the truth, in all this excitement I kind of lost track myself. But being as this is a Sennheiser ME 66, the most awesomest shotgun microphone in the world, and can pierce your skull from a thousand yards off, you've got to ask yourself one question: Do I feel lucky? Well, do ya, punk? ... On second thought, forget I asked. I've been reading your thoughts with this thing all day, anyway. Oh, did I mention my  forearms are killing me? 'Cause they are. A soundman's got to know his limitations. So, if you even consider asking for another take, or - sohelpmeGod - another set-up, , I'll turn your head into a canoe... I'll be sorting M&M's over at Craft Services if anybody needs me."
Posted by Lenslinger at 10:22 AM 2 comments:

Season on the Brink 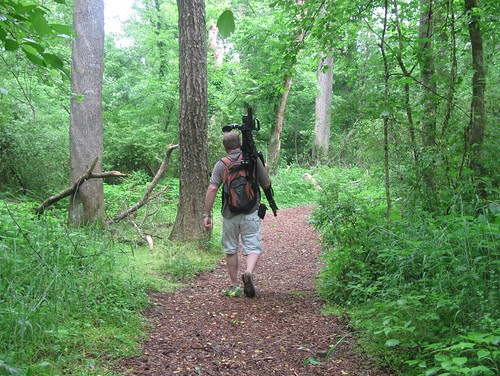 Somewhere in America, an account executive is dreaming of life as a photojournalist. So it is really a shock that I spend four months a year fantasizing about making cold calls from the sanctity of an air-conditioned cubicle? Because I do. Don't get me wrong; I've ridden this planet around the sun enough times to know the grass is greener on the other side of the horizon. But with every humid June that arrives, I find myself questioning my (lack of) career path. Of course, those particular pangs of regret usually overtake me as I'm trudging through the jungle under a heavy load, Drug bust, state park profile, cadaver dog foot chase: the mission doesn't really matter. For once the very air turns aquarium sludge, I yearn for a term inside some politician's office, where the only hot air is that nonsense that spews from the cake-hole of whatever blowhard who just finished texting his wang to his every constituent. That's heat I can take. The hairdryer to the face sensation that is a Carolina Summer? Not so much. I don't know about where YOU live, but here in the Tar Heel state, Spring slams shut in the middle of May and until October, you think about your underwear about every fifteen minutes.

Why's that? Because, be it boxers or brief, the waistband of your skivvies seeps into your spleen. And while we're on the subject of sartorial swelter, can I just say I may be the one TV news photog who doesn't really like casual attire? Now I'm no clothes horse, but well into my middle age, I hoped I wouldn't have to spend half the calendar year dressed like a third grader on his first field trip. Oh, why can't I be fly? I'll tell ya why: I'm a sweater. No, not one of those horrible crocheted numbers foisted upon you every December by your Aunt Hilda. I'm talkin' transudation. See, as a fairly furry forty-four year old father, I can perspire with the best of them. Truth is, I sweat like a fat man zipped into a gorilla suit. It's embarrassing, really. I've had total strangers hand me their bottle of water, for fear the cameraman may soon pass out.  I never do, but if ever did drop, I'd spend my delirium flitting about some imaginary office park dressed to the nines and coiffed like a werewolf.

Now if you'll excuse me, I have to go lay out my Garanimals for the morning and crank the A/C to eleven. Then I'm gonna make sweet love to the ice maker. Heh, like YOU'VE never done that!
Posted by Lenslinger at 11:09 PM 3 comments: