You there, with the wrinkly fingers and soaking wet logos...is THIS what you envisioned when you wormed your way into television? Standing watch outside some rattling live truck as a reporter sprays the interior in cliches and hairspray? I sure didn't. Then again, I was in naval boot camp a good week before it dawned on me I'd soon be living on a boat. But I didn't log in to plumb the depths of my perception. Rather, I wanna talk about the rain. You know that predictably liquidity that every so often drenches the hinterland? Seems to me mankind should be used to it by now, but when what was left of Hurricane Ida parked over the Piedmont this week, we in the media truly acted like the sky was falling. I guess it was.

According to one Axl Prescott Rose, 'Nothin' lasts forever, even cold November rain'. Codswallop! The fifty seven minutes I waited between newscasts the other night spanned several lifetimes. Then again, I was hunched over the business end of a heavy cable I'd stretched from truck to tripod, cap jammed low over my wet head as I cursed an ornery power strip and my current fate along with it. Speaking of currents, when did it become okay to thread extension cords through standing water? I've wired up live shots in hurricanes, flurries, blizzards and beach music festivals and never once fully understood how I didn't come away the brighter. Look Up and Live, I get; those power lines overhead could undo your day should you raise that the truck's mast into them. But orange drop cords and swirling blacktop? We need another slogan.

Of course erecting a set in the middle of a monsoon is only part of your continuing team smotherage. When you're the tip of the soggy spear, you gotta do it ALL: scour the lowlands for stagnant water, chase city crews as they unclog storm drains, suffer the cracks of a half dozen plumbers as they explain to a housewife why her basement playroom now has a swim-up bar, or - my personal favorite - hopscotch trouble spots for signs of flash flooding. A word on flash flooding: Nothing gets a newsroom suit more juiced than a voice on the scanner droppin' the F bombs. No sooner than that alliteration pierces the news cube than I'm back out in the elements, jonesin' for a really cool whirlpool like a junkie in need of a hit. It's time like this, when my very skivvies take on water weight, that I think of the viewer - that hapless taxpayer who - without my best efforts - might not know the sky has turned to water. It's then I ask myself...

"Don't you people have windows?"
Posted by Lenslinger at 12:24 AM 4 comments:

With Apologies to Rod... 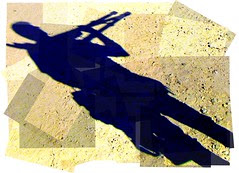 Submitted for your approval: a method by which even the most myopic among us can learn to look inward by selectively staring at others. As trips go though, it is both achingly slow and forever frantic - a mind-boggling slog in which the heartiest of travelers is forced to trod the cosmos with three extra feet. You'll need them, for it's a crucible so fruitless it erodes the soul and maligns the spines of all who come before you. While those who embark on a lark are sure to falter, the inscrutable few will gain entry into a new dimension - a dimension not only of light and sound but one of flickering time-lines, dying live trucks and mindless assignments. But you won't go it alone. Golden shovels, screeching divas and a shocking lack of modulation await our wanderers, but while they'll be forever bereft of credit those who make it through will enjoy a view that eludes the enlightened but never the blighted. There's a signpost up ahead; your next stop: the Twili---

Hmmm? Yeah, seems there's a sewage spill down by Colostomy Falls and the desk wants you to 'put some eyes on it'. You can get back to your little sci-fi thingie later...
Posted by Lenslinger at 10:18 AM 1 comment: 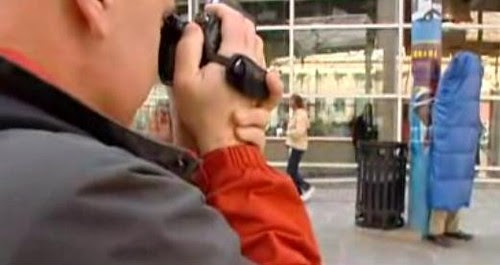 It's not often the News Gods do you a solid so early in the week - but on this fine Monday morning, I caught nothing short of a thunderbolt. KA-WHACKA LACK! The dust cleared and I spotted three figures: two glib hipsters and some stiff in a sleeping bag. Together they strode toward me, drawing stares and glares from the unwashed throng at Winston-Salem's crowded downtown bus depot. Okay, so two of 'em strode; the guy on the handtruck kinda floated Still, they made a damned entrancing trio and as they passed I fell in behind them, raking away singed eyebrows, shouldering my weapon and wishing for once I'd read the press release.

I hadn't. I'd driven all the way to Winston without so much as glancing at the crumpled piece of paper in the passenger seat. Instead, I'd leaned forward into the wheel, knowing only 'an artist' was gonna exhibit some kind of work. Paper Mache, Watercolor, Day-Glo Play-Doh...I knew not the medium. I just knew I was going to make ninety seconds of television from it, come hell or highlighter. So you can fathom my glee when, instead of being met my a grade school teacher with plaster of paris in her hair, I stumbled upon a couple of crazed curators back from a weekend at Bernie's. I couldn't help but grin as I moved in for the kill.

But then the men stopped short, and with the flick of a few quick-ties, adhered their less animated friend to a light pole. There he stood, all sensible shoes and and downy filled slumber sack. I glanced around and saw several faces I wanted to press under glass. So I did, so working the lens for all I could squeeze from it before turning back to the light pole for 'the big reveal'. It did not happen. Instead of hoisting the big blue sleeping bag upward to unveil whatever sacred creation lay beneath, the two museum men disoled into the sea people, never letting the cat out of the bag...

It was then, the crowd moved in...