File this under ways I won't die: set ablaze with bottle rockets by some shirtless yuck in the middle of the night. Sure, some reprobate might wing me with an attempted forehead scorcher, but his next target will be the logo on the back of my news unit, for dodging bottle rockets falls just beyond my job description. Guess I'd make a lousy war correspondent. Veteran Dallas TV News photographer Robert Flagg, however, may have The Right Stuff. That's him sticking around far longer than I would have the other night as some upstanding taxpayers celebrated our nation's freedom by aiming their rockets not at the heavens, but at each other. (Officer Darwin, paging Officer Darwin...) When photog Flagg rolled up with fancycam in tow, the fine citizens of the Creekside Villa apartment complex took direct aim at The Fourth Estate."The missiles — or whatever they were — they were hitting, they were bouncing off my chest and off my camera," Flagg said. "One hit me in the back, and it burned my neck and it burned my shirt." When the PO-leece arrived, they too became targets, a development we here at the Lenslinger Institute find downright disturbing, for our great nation is indeed in peril when Independence Day in Texas begins to resemble the trailer for RoboCop. While strapping plate metal to some hack-cocked officer would make for interesting video, we simply can't afford it. Thus, we're locking our doors tight, turning down the scanners and issuing a blanket Schmuck Alert for any yahoo stupid enough to launch incendiaries at a cop, a camera, hell, even a consultant.

Schmucks!
Posted by Lenslinger at 9:46 PM No comments: 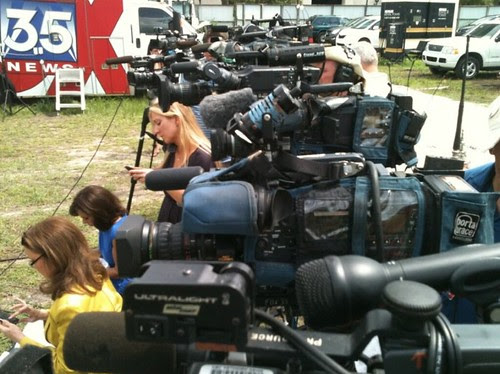 Say what you will about the Casey Anthony verdict (everyone else has), I'm just glad I wasn't part of the thunderous scrum outside that Florida courthouse... 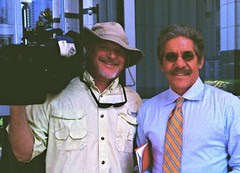 Sure, it's the Trial of the Century (11 years in), but I'd still rather chase a double rainbow that was never really there to begin with than ride herd on some pasty trollop's flogging. Not that I don't enjoy a good sat truck farm: the illegal parking, the muddy cables, the smell of fresh take-out and diesel fumes. Throw in a few celebrity sightings and you have the makings of at least a heavy metal parking lot. Look! Past that guy with the porno mustache. Is that legendary lenslinger Brad Houston? Why's he standing behind Geraldo? Doesn't matter; Dude could wrestle Rivera to the floor with half his chin-cabbage tied behind his back. Hell, I once saw him hold a lecture hall full of photogs hostage with a single showing of his resume tape! 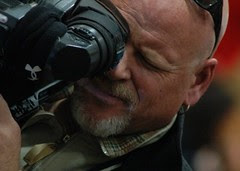 Of course, they gave him a standing O before he got it out of its protective sleeve, but that doesn't subtract from the fact that Brad's had a helluva career, from flying around with former first ladies to traipsing across dead zones to holding court at the annual NPPA Workshop In Norman, Oklahoma. It was there he huddled with yours truly there back in 2000 for a quick tape evaluation. "Oh, he said, after watching my favorite story from the previous year, "I see what you're trying to do." Ouch!  Little did I know then what a powerhouse Houston was. When I did find out, I took his remark as a compliment, though I never did figure out what it was I was trying to do.

Now that the interwebs have made the world so much smaller, I've reconnected with my former sensi. He even said it would be okay if I stuck some of his photos on my humble blog. The one with the cameras outside Camp Casey, I really like. The black and blue foreground, a blonde on the side, the ever present logo on the horizon... I can see what he was trying to do.
Posted by Lenslinger at 10:02 PM No comments: 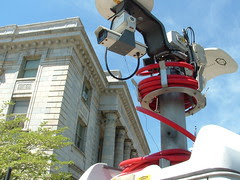 Of all the holidays a TV News photog has to work, the Fourth of July is one of 'em. Actually, it's a lot like working President's Day - just with a greater chance of heatstroke. I should know...

I've schlepped my weapon through more re-enactor campsites than any dues-paying militia member within the six county confederacy.

I've spun like a top in the middle of Main Street as mostly sober grandpas sporting the latest in fez-wear tried to kill me with go-carts and halitosis.

I've soaked in the smoke of a wide open pig-cooker a total stranger in an American flag apron insisted I take a whooping To-Go plate back to the studio. I usually ate it in the car.

I've felt concrete bridges flex beneath my feet as a State Trooper aimed his radar gun down at passing traffic and chuckled as the truckers flinched.

I've dropped wisecracks in the firecracker shack before a guy with nine fingers and a mouth full of worm dirt, er, chewing tobacco shushed me, spraying his collection of PVC pipes in warm, brown spittle.

I've seen steady beads of sweat run down my forehead, drip off my brow and land on a tiny black and white TV screen, until I wiped it dry long enough to zoom in on an approaching beaming beauty queen.

I've huddled with chums in the breakdown lane as men in Smokey Bear hats held up a tarp to block our view of head-on collision victims. 'Cause, you know, we're always putting dead bodies on the air around here.

I've wrung-out jungle-flavored flop-sweat from my third shirt of the day as an on-air partner remained dry and fly under the strain of my reflector and his necktie. Strange get-up for a water safety story.

Yes, I've hauled glass to (and from) every Independence Day cliche that's out there, even made up a few new ones along the way. All the while I've chortled and bitched about double-time not being enough to ease my freedom, and if the schedule I read on my way out of the office of Friday is correct...

I get to do it all again this year. Happy Fourth of July!
Posted by Lenslinger at 8:35 PM 1 comment: