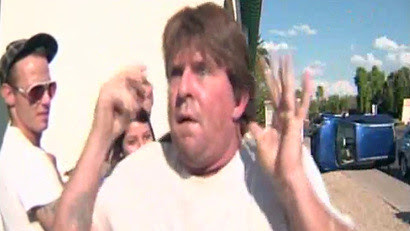 As one who sticks a microphone into stranger's faces, I can tell you it's a pretty perfunctory process. Monotone drones, tangential sentences, bouts of vernacular: they pop up time and time again, foiling most folk's wholehearted attempt to hold the cameraman's attention. Not George Lindell. THAT dude's a tour de force, working his hat as a prop, providing his own sound effects and dropping a catch phrase for the masses on his way out. Look for the t-shirts,  coffee mugs and Conan cameo to follow. In a world where Dane Cook is actually considered funny by some, is there not a comedic vehicle out there for a madcap motorist who does his own pyro? Certainly Jack Black has turned down something. As for me, I'll be sizing up strangers a little differently now, knowing that somewhere out there, the next sensation in waiting wants to tell me how he put the dumpster fire out with his neighbor's cat.

I keep my fancycam's controls proudly set on MANUAL, but my head ... it's stuck on Auto-Reflect. It's always been that way - even before I shouldered a Sony and started repeating myself. What's that, you say? Isn't a life behind the lens the very definition of exciting and new?  Well, Yes and No. Mostly No. Truth is we news shooters adhere to a routine. We follow our own tracks so often, even mailmen shake their heads. We trot out more old props than a magician's assistant. And we repeat ourselves more than your Uncle Louie does when he lies about killing all those guys in Korea. Don't believe me? Here, I'll prove it - using nothing more than four photos I just now found on my phone. Let's review:

Hey look - it's a freakin' polar bear! Actually, his name is Wilhelm and he's a friend of mine. We first met back when the North Carolina Zoo rescued him from a Puerto Rico traveling circus (you read that right). Wilhelm (Willy to his peeps) is a fairly rare bear whose goofy grin and lackadaisical style has made him a crowd favorite and keeper sweetheart. I know this, because I've dragged my glass around the North Carolina Zoo 7,000 times. Not that I'm complaining. (It just sounds that way.)

Ever raced to the middle of nowhere just to lay eyes on a cop car convention? I have - and so has every other tripod jockey on this heartless orb. In fact, the far-flung car wreck is such a staple of news-gathering, they even teach it in college. I'm kidding - they're far too busy pontificating on The Fourth Estate to touch on something as esoteric as when to slip the state trooper your business card, or how to handle that nineteen year old volunteer firefighter who wants you to park six miles back and hoof it up to the scene with half a TV station on your back.

TIMMMM-BER! Yeah, whatever. Once upon a time, chasing storm damage really appealed to me. Then I picked my way through about a thousand debris fields and the novelty of playing pick-up sticks wore more than a little thin. As is stands (or leans) now, I've hovered over more fallen trees than a first year lumberjack. But it only took a half dozen to realize all that broken wood is nothing compared to the stunned expressions found on the sweet people whose yard you're standing in. I'l just let myself out - through what used to be your garage.

Of course, I don't turn intrigue into monotony all by my lonesome. Well, not EVERY day. No, on regular occasion I work with our fine staff of on-air reporters and among that lot you'll find none finer than Winston-Salem bureau chief Brent Campbell. That's him - adjusting his microphone and wondering just what in the hell I'm up to. Pity the reporter who has to hear my schtick long before its turned into pixels. Brent, though, he can take it. Dude's seen every bit of inanity I have and he doesn't even blather about it on-line. Guy like that's got a real future.

I just wish this silly business did.
Posted by Lenslinger at 9:40 PM No comments:

I guess the news crews had it coming. After all, they had the audacity to knock on the door of a Longview, Washington union hall and offer coverage of an ongoing dispute. They were roughly rebuffed. And that's when those jackals from the Fourth Estate stepped over the line. They pointed their cameras at an official note posted on the union hall door. It was more than one schmuck could bear. In a flash, a seething figure wrapped in shrunken flannel burst from the building and in one fell swoop, lowered all the boats in the harbor. "I say, good man, won't you refrain from videotaping our premises?" he did NOT say. Instead, this bellicose nutbag put on a performance that proved not all stereotypes are wrong, lashing out at the reporters and photographers with enough guttural language to make a drill instructor blush.

It seemed it wouldn't end as the longshoreman bounced from one camera to the next, grabbing lenses, threatening everyone and setting back his cause a hundred years. Really now, sir. Wouldn't your stance be better served by reasoned discourse, or even the unimaginative 'No Comment' - rather than the homoerotic comeuppance you slung all over that parking lot? Down South, we call that 'showing your ass' and we generally discourage it unless blood has been shed (or a pitcher of sweet tea has been spilled).  Rarely do we endorse the kind of infantile vulgarity that seems to be your strong suit, if only because it convinces people their prejudices are correct. Didn't you notice the photogs were having a ball? Throbbing veins and flying spittle are a challenge to shoot, but when you back it up with a vocal performance like that, it is a pleasure to bleep and disseminate. Something to think about as your and your pals crack open another Meister Brau, or whatever cut-rate beer you guys drink for breakfast.

Oh, and if that wasn't enough moronic showboating for you, a clip has surfaced of an EMS official accosting a WNBC photojournalist. " I told you to stop!" the medical technician yells, mistaking his dangling walkie-talkie for the Sword of Grayskull. The photog appears as perplexed as we the audience, but that's a natural expression when an otherwise mild-mannered first responder tries to wrestle your livelihood from your grip. Hey, you don't see us media types snatching stethoscopes from the necks of unsuspecting medics, do you? Do you? Hyperbole aside, I'm most troubled by this last clip, as we news shooters have great respect for emergency medical technicians and work hard to stay out of their way. I mean, we expect longshoremen to go ape-shit when the big words start to fly, but an EMT? Must be more to that story and we here at the Lenslinger Institute are anxious to hear it. Meanwhile we can only judge the evidence before us and lump Mr. Medic in with that flannel-clad oaf with the limited vocabulary. 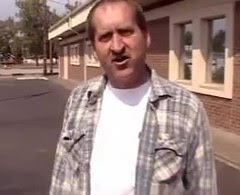 UPDATE! Proving there is some justice in this world, the bellicose longshoreman featured above has been arrested on four felony charges: burglary in the first degree, assault in the second degree, intimidating a witness, and sabotage. 'A witness had alerted police that he recognized (Ronald) Stavas after seeing video on KGW-TV of an angry man who confronted a news crew at the Longshoremen union hall.' We here at the Lenslinger Institute sincerely hope he encounters some form of unwanted sodomy during his time in the, ahem, pokey. Schmuck.
Posted by Lenslinger at 5:59 AM 5 comments: