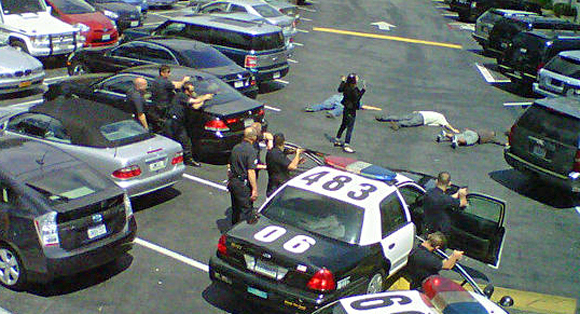 I have been cursed at by dirtbags, berated by haters, and yes, doused in King of the Jungle juice by one pissy predator. But never in my twenty years behind the lens have I been forced out of a car at gunpoint, made to kiss asphalt, the dismissed for not being sufficiently villainous. Jonathan Alcorn has. Thursday the Venice Beach lenslinger and a Bloomberg news crew were riding along with some paparazzi they were profiling when things went all 1991. Sirens suddenly sounded behind their SUV, choppers jostled overhead and rifles lined them in their sites. "Holy Rodney King, Batman, can't we all just get along?" Apparently not, as Alcorn and company were treated to a full-blown felony stop. It's an easy thing to joke about from the safety of my seat, but living through such an encounter had to leave a welt on your psyche. Just listen to Alcorn describe what it was like...

I lie down on the hot pavement face to the ground / “Spread your legs and Hands out!!” I look over to the cameraman next to me,”Turn your head to the left!” Helicopter circling overhead, more barking out of orders to the next “Perp” the sound man. He’s explaining he has audio gear plugged in, has equipment strapped to his waist. I think oh god, please don’t shoot him.

They didn't, but the LAPD did shave a few minutes off the news crew's life when they mistook Alcorn for an armed robber.In the end, the journalists were released unscathed, but as a penalty for wasting the cops' time, the whole lot of them were frog-marched to the nearest discount multiplex and forced to endure a matinee marathon of Reno 911... Okay, so I made that last part up.

NOW OUT OF THE CAR! (Photo by Brittany Joe via Twitter)
Posted by Lenslinger at 10:25 PM 4 comments:

Stress of the Press 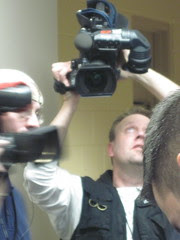 I don't buy it. Sure, a photog's job is worrisome, but number 4 on The 10 Most Stressful Jobs of 2011? Surely, there's a submarine commander or tightrope walker or bomb squad technician under more pressure than those of us hoisting Sonys over our heads. Hey, how about air traffic controllers? They have to stay awake for nearly an entire shift! Oh, wait...

Honestly, I don’t stress out on the job like I used to. Sure, I kicked the shit out of that trash can in the edit bay the other day, but it HAD been leering at me for the better part of an hour. No, compared to how I used to wig out, I’m a regular Hari Krishna (as opposed to an irregular Hari Krishna). Back in the early nineties, before I had turned (most) every kind of story there was, I’d crisscross the region in my news unit, sucking down Marlboro Light after Marlboro Light as I wondered aloud how in the hell I was gonna have that story done by the time the anchor introduced it. Oh what a difference a couple of decades make. Now, I turn three o clock kerfluffles into winking five o clock reports without ingesting a single cigarette. It’s not that I don’t earn a few new wrinkles in the process, but I rarely ever question wether or not I’ll be able to hit my deadline. Why? I don’t know, really. Twenty years into the same gig have refined my ability to shoot economically, write scripts in a loud newsroom (earbuds and Metallica help) and edit at the speed of fright. There are, however, a few things that still stress. me. out.

I’ve never hidden my disdain for live trucks, as I believe they’ve accelerated the downfall of a once noble profession. Mostly though, I’d rather shoot write and edit than play truck tech. Thus, I avoid them like genital warts. Sometimes, though I can’t properly dodge such assignments and I find myself scratching various body parts as I stare at control switches I don’t remember. Since flipping the wrong switch in a live truck can fry you from the insides, I always call the engineers, but not before kicking up a few dirt circles first.

Hey, here’s a thought: If you’re a Public Relations person with a juicy story to peddle, don’t fax me all the details and then leave the country. I cannot tell you how many times I’ve done back-flips over a fresh, fluffy press release only to have the PR wonk that sent it totally stonewall me. Okay, I can: 982, 061. I don’t know whether they don’t expect us to respond so quickly or are just trying to torment us because they themselves washed out of the business. Either way, it’s stupefying. One local entity is notorious for the phantom fax. I won’t tell you the name, but their initials are GTCC.

I love Macs. I’m making sweet love to one right now. But for the life of me, I can’t fathom why the Cupertino crowd made their pre-crash distress signal so effing cheery. There I am, minutes before airtime with much more to edit when that spinning beach-ball of death thingie appears on screen to let me know I’m about to be screwed. Why not a skull and crossbones or lumbering Bigfoot avatar? Then I wouldn’t feel so silly throwing a tantrum over a symbol that should evoke memories of sandcastles and bikinis. Not that I’ve ever let such a discrepancy stop me from a good tantrum.

Oh, as to why photojournalists and newscasters ranked so high on The 10 Most Stressful Jobs of 2011? Weaver has a theory I like. He posits that we in the media are no more stressed than any other profession. We’re just extra whiny about it. Reading back over this post, I’d have to agree.
Posted by Lenslinger at 10:42 PM 9 comments: 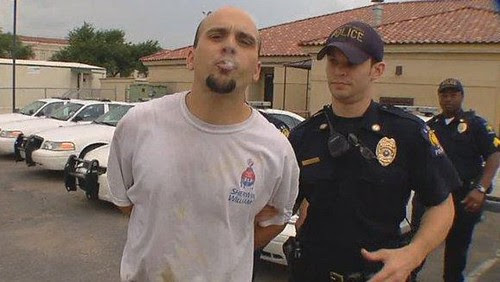 So, you got popped stealing band instruments and the cops are about to walk you out in front of the TV cameras. How you gonna explain THIS to Mom? I know! As soon as you get within range of one of those media leeches, dig deep and hock up some of that crack-flavored spit you been saving! Let that puppy fly and you'll be the envy of all your fellow inmates, not to mention back in the good graces of your Mother. See, deep down inside, she knows you're a thieving parasite, but at least now she can point to the solid trajectory of your little phlegm-ball there to convince others you're finally on the straight and narrow. There's only one problem...

You're a schmuck! At best, your face would have graced the airwaves for a few seconds. (Hey, stealing band instruments is pathetic - not unique!) But now that you launched a loogie in slow motion, your shame will play out across the Pelican State again and again and again - until everyone from your first grade teacher to the band of degenerates you now call friends is simply sick of your spit. But wait, there's more! Choice websites across this heartless orb will trip over the pixels pitting you on their front page! Here's one now! Se, we here at Viewfinder BLUES take special interest in balding eunuchs who spray their DNA. And that cameraman you tried to baptize? None other than Chris Sasser, card carrying member of the Lenslinger Institute! He kept his cool after your feeble stunt, but make no mistake: he'd like to shove that fancycam straight up yer pokey!

So take a moment from explaining to the guards why you need extra gravy lumps and pat yourself on the back! Oh, wait, you're shackled at the waist. Let 'Razor' do it! He's got tons of time to kill, likes his bitches bald and can replenish you with all the spit a boy could need. Ask him nicely and he may even let you watch the news! Think how poroud you'll feel when all the fellas on the cell block stop and take note of your pursed lips and overall lack of hygiene. Imagine the dates you'll get! While you're at it, imagine this: that photog you lobbed saliva at is out and about in the free world while you fend off suitors, If that's not enough to make you stick your head in the toilet, maybe the image of your Mother denying she even knows you will do the trick.

Either way, society wins and you Sir, do not. Think how very proud you've made us all...