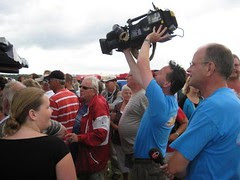 I don't know what your exercise regiment is, but mine consists of carrying a 25 pound fancycam most everywhere I go. Throw in 14 pounds of tripod, along with a battery or three and you can probably grasp why I let my gym membership lapse. I'm kidding, of course. I've never owned a gym membership. Well, there was that brief period in the early 90's, but after a few visits it occurred to me I was paying a faceless corporation for the privilege of lifting heavy shit. That sort of scheme didn't set well with a stevedore like me, so I hung up my unitard and haven't worked out indoors since. Why should I - when I drove around with a bunch of high-dollar dumbbells in the back of my car. 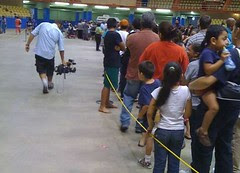 Now, I'm no Doctor. But I did once chase a disgraced Dentist into a courthouse elevator and if I learned anything from it, it's that even a prissy hygienist will still throw wicked elbows if she feels her livelihood and/or skeevy boss is threatened. What exactly that has to do with the subject of tonight's post I haven't yet decided, but it does illustrate my gig's inherent risk of unplanned exertion... There's the squad car squat-thrust, a method of quick cockpit expulsion utilized whenever the ride-along suddenly turns into a foot-chase. You know, there's only one reason you never see a COPS cameraman stop mid-sprint and heave on a tree: editing. 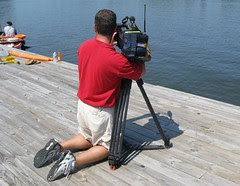 Then there's the desperate stretch. Performed in courthouse corridors and winner's circles, this maneuver consists of hoisting your camera as high as physically possible. Try to remember to point the viewfinder tube down before you do. Otherwise all you can do is stare up into nothing and hope you don't drop the damn thing. Once you master that, you're ready for the thousand yard sweat, something I perfected just today when a certain PGA event turned into that egg-sucking scene from 'Cool Hand Luke'. Don't ask; just know that if Davis Love the third wants to take home another trophy, he'll stay upwind of your suddenly pungent pal.There are more forms of torture of course, but until these painkillers wear off, I probably won't get around to making them up....

In the meantime, hit the showers, will ya? That kind of camera-punk funk could melt the wax off TelePrompter glass. Then who's gonna lead our country?
Posted by Lenslinger at 6:38 AM 3 comments:

Heard on a Wire 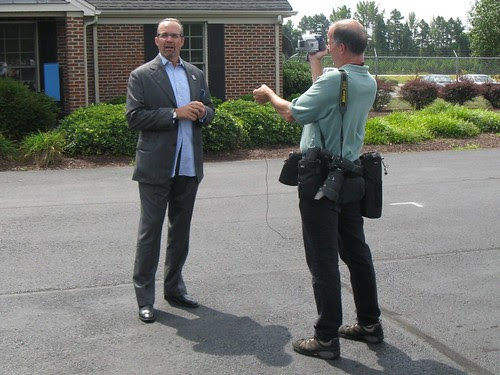 Judging from the look on Kyle Petty's face, he can't figure out why the TV guy is taking his picture. Truth is, my snap decision (get it? 'snap' decision?) had little to do with the pony-tailed philanthropist. Rather, I was moved to do so by the recorder's disorder. And no, I'm not bagging on this newspaper photographer's baked potato cam, as it's the same kind my 12 year old uses to sneak up on her Dad when he's sleeping at his desk and that footage always turns out fine! No I got a problem with dude's audio technique. See, that's a lavaliere microphone in his left hand, the kind of device you usually see pinned to some speaker's shirt - not hung out to dry in the midday sun. Now I realize video is this shooter's last priority, but such inattention to detail is exactly what's going to make this new era of media consolidation so difficult to watch. And hear. Now, for those of you who think I'm picking on this multi-tasker, well, you got me there. But considering there were two (2!) private airplanes firing up their turbo props just a couple of yards away, this rather unsound technique left me speechless. As for Kyle, he carried on, telling his interviewer, "SKKKKRAGGGGBBBBBEEEEEEEEFFFFGGGILLLLLLLL..."

At least I think that's what he said.

UPDATE: Upon some reflection, I've decided I was a bit too harsh on the above news-gatherer. As one who straddles a couple of mediums myself, I should know better. A pox on me for taking what kind of comes off as a cheap shot. Besides, I watched the report that resulted from the above interview and Kyle's sound quality was no where near as egregious as I predicted. Who knew?
Posted by Lenslinger at 9:24 PM 4 comments: I'd like a chance to explain why your frowning mug made it on the news tonight. God told me to put it there. But don't blame Him. Blame You. See, when I wandered into that classroom you were sitting in this morning, I was just looking for a few quick cutaways. You know: shots of pencils penciling, teachers teaching, students acting like they had some sense. The kind of thing you might see on TV. Tee-Vee ... that glowing box in the corner of your den that tries to sell you dishwashing liquid and virility pills. You've seen it, right? If you had, you'd probably know that those flickering images don't get there by themselves. No, there acquired and assembled daily by lowly souls like me, individuals who quickly decide they've seen it all - long before they actually have. I myself have pointed cameras at shackled crackheads, celebrities with one name, morons with white sheets over their head and a flatulent world leader or two. But few have reacted like you.

From the moment I followed the instructor into that classroom, you made your presence known. The huffing, the puffing, the oddly audible eye-rolling - it was quite a performance. Granted you have every right to act that way - and there's no law saying you have to be on television. But the tact you took to escape my gaze had all the subtly of a sweaty wrestler swearing vengeance on a costumed foe. Between the stink-eye and the hyperventilation, I considered for a moment digging my cell phone off my belt and dialing 911. Instead, I tried to ignore you - with the quiet knowledge that before I left that small room I would commit your image to video - something I had zero interestin until you began acting like that hopped-up 'tween from The Exorcist. I would have stuck around longer, but I don't look good in green pea soup.

There were other people in that room who didn't want to be televised. So they hunkered down a bit and hid in plain view. Not you. Apparently, you thought I was a cyborg bent on destroying the community college system class by class - or perhaps you figured I was lead sentry for those death panels you've heard so much about. Maybe you simply assumed I was out to steal your soul. Either way, you flailed about there in your undersized seat, hissing in a twangy stage-whisper like a pissed-off Minne Pearl. Soooo, I pretended to tie my shoe, drawing your attention away from my camera. I had no choice - for defying a photog to take your picture is like hurling a Molotov cocktail through a fire house window and expecting the guys in Nomex pants to ignore it. Consider it a code we photogs live by - much your like habit of draping that amorphous torso in NASCAR garb. Besides, we both know you wanted to be on camera. So enjoy the cameo, for while it's your mullet filling the screen... 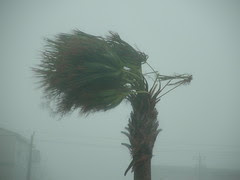 Anna, Bill, Claudette - I lay low for a single weekend and the Tropics start hurling Caucasian names toward the East Coast. Here we go again! But now that we're blathering like never before, I wonder just what it will be like when a certified hurricane does slam into the social media landscape. I wonder, if it would go something... like ... this:

Took some convincing but the bosses said I could go! Bags packed, camera wrapped, tank topped off, cooler full of granola & Gatorade. Hurricane Leo here I come!
20 hours ago from TwitterFon

Arrived at hotel. Six sat trucks already here! Lady @ desk says power about to be turned off. So? I’m here for adventure! Now where are those Granola bars?
16 hours ago from TwitterFon

Shirtless guys boarding up trinket shops. Agreed to be interviewed but couldn’t understand what they were saying. Something about ‘kegger at the double-wide’.
13 hours ago from TwitterFon

Nothing open on whole island. Locals flipped me off. Storm to come on shore soon Cops chased me off. More sat trucks @ hotel now. Bring on the ‘nola!
10 hours ago from TwitterFon

Winds picking up. Saw a trash can fly! Going live from 3rd floor balcony. Gear all over my bed. Sat truck guys sure curse a lot. Is that Anderson Cooper?
8 hours ago from TwitterFon

Storm’s here. Lobby full of crews. Big blob on lens from built up moisture. Rash on ass. Station wants reporter ‘out in it’. Saw her pass a tape to CBS worm.
7 hours ago from TwitterFon

4 hours to sleep til next live shot. Room HOT & HUMID! . Stomach seized up from granola. Hotel totally pitch black. Took dump in ice bucket. Is that wrong?
5 hours ago from TwitterFon

Still raining sideways. Dozed off but overnight producer kept paging. Wants reporter on the beach. Says other stations doing it. Watched light poles bend. Whatever.
54 minutes ago from TwitterFon