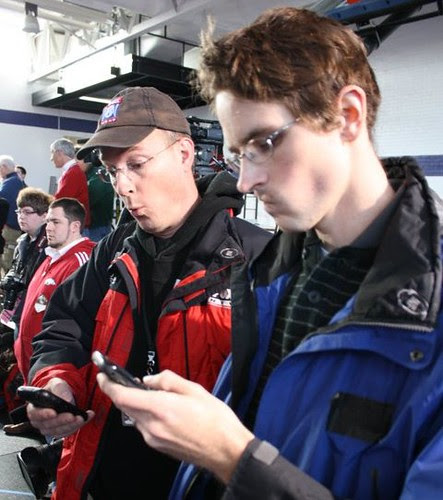 Either there's been a rift in the time-news continuum, or key members of the Fourth Estate have switched brains with my teenage daughters. How ELSE do you explain a picture of two battle-hardened photogs gaping at their phones like a couple of food court zombies? What's up, fellas? Hello Kitty drop a new cat counting app? Justin Bieber tickets go on sale? Candyland finally offer dual citizenship? Hey, how you spend your downtime is up to you, but it's awfully hard to mythologize our breed when you guys go all Hannah Montana on me. Hmmm? What's that? The President is in town and you're killing time during the security sweep? No problem, I once knitted an entire Cosby sweater waiting for Bill Clinton to polish off an intern.

Or was it the other way around?
Posted by Lenslinger at 8:08 PM No comments:

Signs Your Presser is Tanking...

10) The unmistakable sound of Droid Tetris is emanating from deep within Tripod Row.

9) The TSA Agent you convinced to drive the VIP's over from the airport is insisting on a cavity search.

8) The lavaliere microphone the in-house audio guy insisted you wear has slipped down your trousers and is amplifying your flatulence.

7) Your intern stocked the press kit bags with muscle relaxers and cans of Red Bull.

6) The perky PR flack you hired to beam reassuringly at you from the back of the room is for some reason flipping you off.

4) That tool from Wikileaks switched your opening joke index card with a recipe from The Anarchist's Cookbook.

3) Who knew the all-nude bagpipe revue rehearsed in the space next door?

2) That writer from the free weekly is using the press release you handed him to de-seed his dime bag. Don't worry though, it's medicinal.

And the Number One Sign your press conference is tanking...

1) You turned out the lights and no one noticed.
Posted by Lenslinger at 9:53 PM 1 comment: 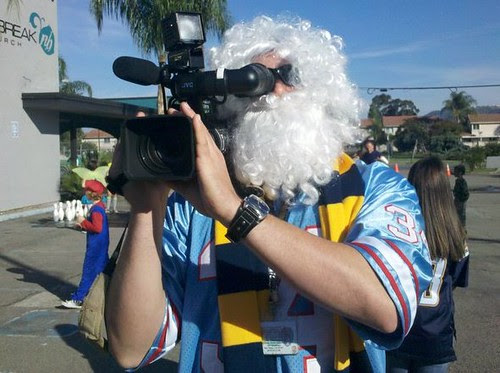 Not a lot of folks know this, but Santa Claus himself spends the off-season under glass. No kidding - nine months out of the year he shoots morning television down in San Diego. From what I understand, the local mostly leave him alone. Good thing, too - 'cause the old guy really gets into it. Rising early to run cable, Standing all handheld for hours on end, nursing his girlish figure every day at a different drive-thru... why, it's an exiled figurehead's total fantasy! Best of all - none of those filthy elves running around the place! At least that's what ole Kris Kringle said when he caught me stealing batteries out of his live truck. Said he was gonna out me on some kind of list --

--Hmmm? What's that? It's NOT Santa Claus? It's some dude named 'Big Al, the Weatherman's Pal' - that elusive shooter for Meteorologist Dave Scott on Good Morning San Diego Weekends on KUSI Channel 9?

Way to cancel Christmas...
Posted by Lenslinger at 10:46 PM 1 comment:

Indulge me a moment, for there are things far more important than local TV news. Like, my bike! It's a standard enough Trek with front suspension and a rigid seat, but when I climb aboard it becomes a heavenly vessel, one capable of defying gravity, folding time and bloodying my shins. It is quite possibly, my favorite possession. But for the better part of the past four years I've let it gather dust in the corner of my garage. Now, however, I'm back in its rock-hard saddle, thanks to a break in the weather and a totally intact mid-life crisis. No, I'm not gonna go drop coin I don't have on a shiny news Corvette (What kind of choad do you think I am?), but I WILL toss the Trek in my truck, find a winding path through the local jungle and forget my troubles as I surf the Earth. What I won't do is wiggle into those biker clothes, you know - the gay superhero look. Hey, you can 'don't ask don't tell' all you want, but if you're hanging out in the woods in day-glo spandex, it might be time to have that talk with the wife. But I digress.

Of course, to really get off track you need a narrow, twisting path full of bowls, berms and other nut-busting luxuries. Here in the Piedmont, we got that in spades. Why within a stone's throw of my humble abode, lies the kind of tail-derailing trail that can make a forty-something father of two feel a quarter of his age. That, or end up in traction. And while there are other, more fabled bike paths around these parts, I've become enamored of a place called 'Blue Heron'. With far fewer roots than I'm used to a nice, open flow, Blue Heron features the kind of jostling topography I could only dream of when I lived closer to the ocean. In fact, I'd only lived here a couple of months when a photog by the name of Allen Horton turned me on to the endless network of bike trails that tattoo our many parks. Since then, I've reveled in the scenery, the solitude and serenity of this thing called 'singletrack'. You can have your skinny-tired cycle and lime-green Lycra tights. I'll be down in the holler, rocketing over hilltops and trying NOT to wrap my torso around a tree.

Still, I had to know where I stand, er crouch. So I called on some folks with chain grease in their DNA. Jerry Wolford and Michael McQueen are friends of the blog and its somewhat humble author. Now, technically, they're both newspaper employees and talented ones at that. But I know them as crime scene connoisseurs, recorders of the the highest order and bruised enthusiasts of the pedaled pursuit. What I didn't realize is how hard they ride. The day I joined them on the Blue Heron trail, they easily outpaced me without breaking so much as a complimentary sweat. The nerve... not to mention the corpuscles! That HAD to be why 'Jelly and Da Mangler' could carry on a casual conversation while I fought to keep up and catch my breath. McQueen especially - with his BMX past - can turn a handful of scattered pebbles into glorious air. Why, I saw him bounce off a woodchuck, taco his wheel and still beat me back to the truck. That's including the breather he took while I stopped to hack up a few ghosts of cigarette past.

Though I felt like I'd been run over by a dump truck the following day, I did return to the scene of the crime long enough to turn the tables on someone even less prepared to bike than I. Weaver - he of the positive attitude and McGyver tattoo - brought his boys, bikes and brawn along for a Thanksgiving morning ordeal that would leave anyone with a monster appetite - provided you still had any teeth left at the end of the ride. As for the Weavers, they left with their bicuspids intact, but not before spending a couple of hours negotiating hairpin turns and unexpected dips at less than breakneck speed. Yeah, we weren't the fastest cyclists out there that day, but we were among the giddiest. Don't believe me? Watch the video below and listen to Weaver giggle, huff and snort. Those, gentle readers, are the sounds of a grown man shedding a few dozen years along with a couple of quarts of sweat. I'm not saying he had a good time, but the last time i heard him squeal like that, his Droid was wedged in his watch pocket and stuck on vibrate.

Now if you'll excuse me, I have to go pry some tree bark from my teeth.
Posted by Lenslinger at 11:51 PM 1 comment:

It'll be worse in Wellington!


There's certainly nothing I can add to this brilliant send-up of photogs and boot camp, so why even try? Enjoy... then check out the priceless thread it inspired...
Posted by Lenslinger at 7:01 PM 2 comments: