Shooter in the Crosshairs 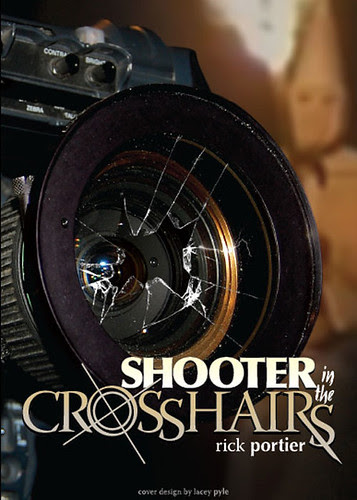 Brock Nicholls screwed up. Now, he's stuck where his career started, Baton Rouge. When an arsonist begins torching the city, it's his ticket back to the top, but he'll have to fight his boss and partner to get there. When he meets the arsonist, Brock discovers he has one more demon to exorcise...

For years now, Rick Portier and I have ruminated on the rewards of writing. During countless phone calls and more than a few times in Vegas, we've knocked back top-shelf liquor and traded lies about jack-slapping the muse. Now, that dodgy little photog has put his imagination where his mouth is. With Shooter in the Crosshairs, Rick's combined his knowledge of the news business with his gift for depiction to create a freakin' page-turner. The nerve of that guy!

When his television career went down in flames on the steps of a Dallas courthouse, it made national news and earned the TV photog a night in lock-up. Now, Brock’s stuck in the place where it all started, Baton Rouge, working for a mental midget like Percy Finch and his "Good News" strategy that has viewers flocking to the competition. If that weren't bad enough, Finch has Brock locked into shooting pet parades for Katie Couric wannabes like Nancy Patrick....

Are you kidding me? With a set-up like that, square-dancing zombies could do-see-do all over the next chapter and a half and I'M STILL IN! Luckily for us though, the -AHEM- author steers clear of the undead and instead sticks to the streets he knows so well. It's that authenticity that will leave anyone who's hoisted or stared into a fancycam nodding their head in recognition. As for me, I'll try and keep my head out of the nearest oven as I ingest the quest of one Brock Nicholls, a world-weary news shooter who I'd love to see team up with G. Lee. First though, there's an arsonist to catch and I know just the man for it.

Along the way, Brock reveals newsroom secrets and rails against everything that is wrong with the business he loves, a business that's cost him every relationship he's ever had. When he finally comes face-to-face with the man behind the sheet, Brock discovers he has one more demon to exorcise – one from his youth. In order to do that, he'll have to decide between telling the story of a lifetime and sending a murderer to jail.

How does it end? How the hell do I know? I'm reading this thing along with the rest of you! So while I don't need an extra copy, surely there's someone in your life who does. So buy Shooter in the Crosshairs and help a brother achieve his dream. And do it soon, before the artist formerly known as Turdpolisher lands a three picture deal and won't return any of our calls.
Posted by Lenslinger at 8:14 PM 2 comments: 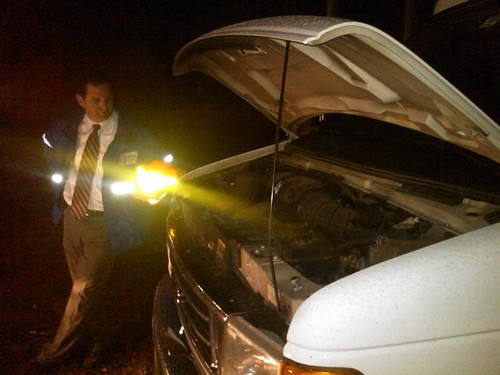 Funny how the average live truck can crisscross three counties, race through rush hour traffic, squeeze into a breakdown lane, idle for six hours straight, double as an audio booth, sleep three (un)comfortably, attract transients and school children, backfire only in sketchy neighborhoods, boast the logos of three separate consultant firms, power enough lights to be seen from space, suck just enough gas to ensure you'll have to fill it up later, harbor the remnants of a thousand dollar menu items, inspire new whole methods of laptop hackery, serve as a grooming booth and/or rest station for restless 'talent', spew engine exhaust on anyone rolling up cables, emit the kind of aroma that brings to mind sea travel...

...only to break the hell down on the way back to the station.

Okay, so it's not funny at all - especially when you've put in a long day of news gathering and are still FAR from home. In fact, of all the inconveniences I might wish on a competitor (weak camera batteries, brittle light bulbs, flatulent reporters), I wouldn't foist a dead live truck on my worstest enemy. Just ask A.J. Willen, the Atlanta lenslinger who posted this photo and jump-started my my memory banks... I remember one remote van in particular that would seize up with 'vapor-lock' every day at dusk and shut down on the highway home. "Nothin' you can do 'bout it but sit and let it rest for awhile", said the engineer on the other end of the cell phone. One fall evening I nearly abandoned the damn thing along Route 421. ("%#$@% this!", I remember thinking. I'll just live like Caine from Kung-Fu; ya know, walk the Earth, drop-kick evil villagers...)  I got about a half mile down the road, thought about my mortgage and the mud-hole my wife would stomp in me if I marooned a mobile newsroom..

It took nearly two hours to get that live truck back to the shop. At one point a car full of Goth kids happened by and began heckling me, 'til I threatened to microwave their piercings. I think I was justified...
Posted by Lenslinger at 9:02 PM 4 comments:

Arose Such A Clatter...

'Twas the week before Christmas and all through the land,
News crews were squeezing into their vans.
To airports and malls they carried their loads,
They even went LIVE by the side of the road...

Around them the world began to slow down,
But they were too busy looking for sound.
Grilling last minute shoppers and fake Santa Clauses,
Their producers would cue them when to take pauses...

Back at the station, managers vanished,
The green room sat empty, its visitors banished.
Top anchors split early, their substitutes preening,
Thank God the Year-Ender was due for a screening...

Over in the studio, the pizza's arriving,
It's all that keeps the floor crew surviving.
But the Sports guy dives in, as do the slackers,
Back in the live truck, they eat chap-stick and crackers...

But if good food and family are things you will miss,
What the hell are you still doing in this business?
Why you're lucky to have a job at this station,
Unlike normal folk, The Truth takes no vacation...

So hang in there, all of you stuck in a truck,
Our industry's changing and so will your luck.
But should you start feeling merry - now or later,
Know you're breathing in fumes from the truck's generator.
Posted by Lenslinger at 9:15 PM 3 comments: