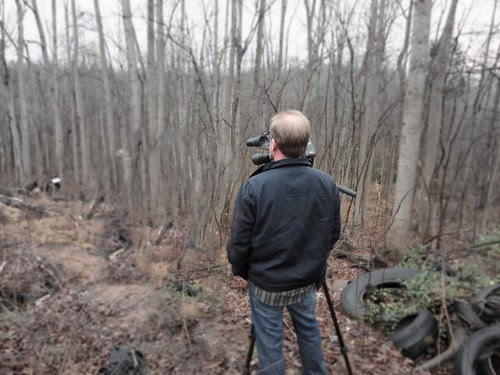 With loss comes introspection, an affliction from which I've suffered all my life. What can I say: I muse in Hi-Def. That doesn't mean I'm smarter than you; it just means that if I ever got tossed in a car trunk and driven across state lines, I could entertain myself well into cattle country. Interior monologues will do that to a fella. Not that I hear voices. That you know of, anyway... Now, where was I?

Oh yeah, my mastery of distraction and it's many travel hazards. I'm already so reflective I can't back out of the driveway without a few birds flying into my car. I can't glance at my GPS without getting lost in thought. In the time it takes the yellow light to turn red, I can leave my body and fly around the block. Should a traffic jam ever block my progress, I usually go all Michael Stipe: crawling out on the top of some stranger's Buick and cradling myself while the jangly guitars no one else can hear drown out all those annoying car horns... You can imagine how unpopular this makes me during rush hour. Yes, if life were a side-view mirror, I'd be double-parked in the middle distance.

Which is why you'll have to forgive me if I've lost focus as of late. An enchanted being I've come to rely on has vacated this realm and he left no forwarding address. I guess deep down inside I know where he is, but that doesn't mean I'll stop searching the horizons for him any time soon.

Besides, I like the view.
Posted by Lenslinger at 10:15 PM 2 comments:

They don't call them 'asshole magnets' just because it sounds cool. A fully exposed fanycam can attract morons from a five mile radius. Factor in a governmental center or packed sports bar and you have one more reason why you should keep one eye open and your head on a swivel. Just ask Ole Olson. The veteran KOIN photog was minding his own deadline outside a Portland courthouse the other day when inanity struck. Luckily for us, Olson struck back.

Apparently the taste of freedom didn't agree with Gary Kemple, for not long after dude was sprung from the pokey,  he made a beeline for the gaggle of news crews backpedaling outside. They were there for someone else, but Kemple didn't let that stop him from insinuating himself in the rolling scrum. Before any of the reporters and photogs even noticed him, the pint-sized jailbird accused a KGW shooter of punching him. This led to a few moments of confusion as the group of journalists wondered to themselves why a body-double from Joe Dirt was suddenly getting his mullet in an uproar. Then, as quickly as he appeared, the man vanished.

But he came back.

Not to apologize, mind you, but to hock a greasy lob of pork-rind flavored chromosomes at yet another photog. Dude - get your delusions straight!  How am I supposed to know what you're mad at when you spray the place with such abandon? Focus, man, focus! As it turned out, Kemple never got a chance to fully explain his rage, for in his rush to express his displeasure with the Fourth Estate, the little guy spat on the wrong cameraman.

That much is certain.

Unhappy at the felonious saliva running down his lens, KOIN photographer Ole Olson broke away from the pack, fished out his phone and began calling 911. This seemed to further enrage Kemple, for he began pushing the much taller photog. "Back off, buddy!" yelled Olson, using a much nicer nickname than I would chosen. But the strangely angry man did not back off. Instead he ratcheted up the action considerably by lifting his foot and stomping on Olson's camera.

It would prove to be a tactical error.

With the sangfroid of a seasoned lenslinger, Olson broke out a whole barrel of whup-ass. Grabbing Kemple by the collar, he walked his would-be attacker into the chest of a roadie from Foghat. What the legendary British rock band was doing in Portland I have no idea, but their sizable stagehand soon took umbrage at the melee in his face and pushed the scuffling couple away. That's when Olson, in a series of maneuvers that would elicit cheers from photog lounges far and wide, put the crazy little man on his ass.

Pardon while I soak that in for a moment.

Ahhhhhhh.... the sweet smell of street justice. Or is that former inmate urine? I can never tell. Anyway, what followed was your standard issue schoolyard wrestling match. You know, the kind where the bigger kid rubs some younger punk's face in the pavement. Yes, we'd all like to catch it when it comes out on Imax, but here at The Lenslinger Institute we take no pleasure from others' misfortune - even if we did watch the clip in question about 74 times over chips and soda. Our verdict? Olson was more than justified in defending his camera's honor. Sure, he could have 'called the law' but what fun is that, when you can plant your knee in an opponent's throat?

In the end, Olson escaped the fray with only a minor eye injury and it's believed his camera will live to see another perp walk As for Kemple, cops ushered him to a nice, warm holding cell where he no doubt requested the guards turn on the local news to see how a real man celebrates his release from incarceration. Oh well, some folks will do anything to get on tee-vee.