My Other Car's a Submarine 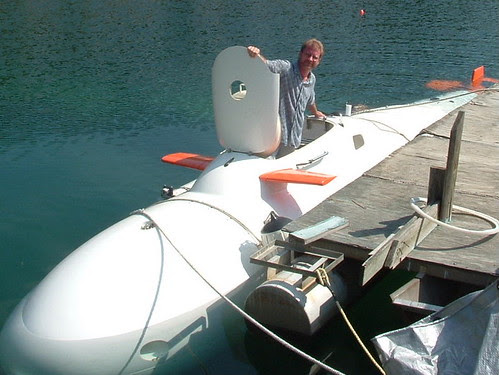 Hey, remember that time I fawned all over that War Journalist action figure and a few of you actually pitched in and got it for me? Well, it just so happens another item has caught my eye - a totally kick-ass thirty-four foot submarine! Hear me out: For a fleet 12 Million, this little fish can be all ours. It's a throwback to the dawn of submersible warfare, a modern day Hunley can forge the shallows of a riverine environment, plumb the depths of an open sea or scour the edges of a hostile harbor. What you do with it is your business. Me, I just wanna terrorize a few kayakers on Lake Brandt. Those guys really piss me off ... Anyhoo, if you're still not sold on buying us a sub, check out this package I turned on her yesterday. The TV news story itself, I'd give a 6. The ninety minutes I spent talkin' shop with a pontoon boat full of ex-Navy types as we chased a shimmering white cylinder across a freshwater quarry ... that rates a solid 9 (1 point deducted for the cameraman-hampering heat). NOW DIVE!!!
Posted by Lenslinger at 7:10 AM 1 comment: 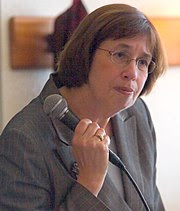 Don't look now but there's a schmuck on the loose in the Fourth Estate. Actually, there's whole roving squadrons of them, but I'm here to spotlight just one: Linda Greenhouse of The New York Times. Seems the lady objects to being televised. With that dour expression I can't say I blame her, but when you're a working reporter appearing before a freakin' journalism conference, you simply cannot send C-Span packin'. Yet that's exactly what Linda did the other day when she refused to take part in an panel discussion unless the cable access people strike their gear. Tragically, the event organizers buckled under Greenhouse's considerable pout and sank a dagger in the back of the quietest camera crew in town. Et tu Brute? And what about you, Missus New York Times reporter? Don't wanna share with the group? Too accustomed to dropping your bon mots on a room full of chortling insiders to brave the white hot spotlight of a few daydreaming C-span techs? Hey, that reminds me, Book TV's on. I gotta go. Oh yeah ... Schmuck!

(Thanks to Mark on Media)
Posted by Lenslinger at 7:09 AM 4 comments:

While I've been feeling sorry for myself, another TV news photojournalist has kept his eye on the prize. Rich Underwood, veteran television director, cameraman and part-time educator has penned a hefty tome on the state of Electronic News Gathering. Roll! features interviews with TV news vets, practical shooting advice and hopefully a war story or two. Cover to cover, its 416 pages of words about the pictures and sound we harvest every night. A respectful dip of the lens is in order. With so many on-line video 'experts' rushing their own manifestos into print, it's heartening to see a broadcast journalist assert his mastery of the craft. I only wish it were me. Actually, several folk have suggested I attempt to assemble a manual of sorts, but I've always dismissed it for fear of the arduous research it would take. I guess now I can scratch it off my list altogether. Still, if I ever did write a textbook, I hope it would be the TV news equivalent of this.
Posted by Lenslinger at 7:43 PM No comments:

Too Hot to Jot 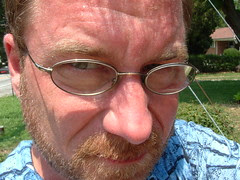 Hey, what's more fun than a triple-digit blast of heat and humidity? Writer's Block! That's right, just as the mercury pushed past a hundred degrees, I rushed out and contracted myself a whopping case of lyrical constipation. Thus, I'm sweating buckets by day and staring at an empty computer screen by night. THIS SUCKS! Just how am I supposed to deal with the Biblical stickiness of an unGodly August if I can't at least bitch about it on-line? Sure, nothing's stopping me - but for a guy who's used to blithely transcribing the voices in his head every night, this silence is truly deafening. I can only hope it won't last, for soggy underwear and an arid imagination make for a grumpy lenslinger - and who wants that? Not my wife...

Psychoanalyis aside, I cannot figure out what's go me so ... stuck. Could it be that those droplets of sweat that pour from my brow each contain valuable writer's DNA? Perhaps I've just wrung my brain of every scenario it had to offer. Or maybe - as one co-worker cheerfully suggested yesterday, my blog and I have simply peaked. Ouch! You know, when I think about it, that's a real possibility. Over the past three years I've written on-line just about every night. It's been wonderfully therapeutic and at times downright easy. But lately, my torrent of thought has dried up and I find myself grasping for ways to fill the page. That's happened before, but never to such a maddening degree. And it truly is maddening. Words have become my sword and shield and without them I feel unarmed if not naked. And trust me, no one wants a naked lenslinger. Not in this heat.

Ya know, maybe that's it. The crushing humidity that I so assiduously exxagerate has finally lived up to the hype. How hot is it? Well, every open door feels like an oven blast. Heavy air drapes onto your every pour as your very eyelids slide down your face. Take three steps outside and you feel like you've crossed the Sahara - sand in your mouth, clothes soaked, hazy apparitions in the distance - and that's just in the station parking lot! Heave a TV camera onto one weary shoulder and you'll soon feel like an overburdened packmule stumbling through some sun-bleached gorge and looking for a shady place to die. If that's overselling it, you ain't been outside lately - and dashing to the car during your lunch hour doesn't count. Nope, to truly appreciate this swelter, you gotta stay out in it, just like all those Southeastern news crews who've spent the week crafting Profiles in Sweat.

You know ... those winking, cliche-ridden news reports about your neighbors who have to work in the heat. Next time you watch one, do me a favor and get close to your set. Chances are if you take a big enough whiff, you can smell the photog responsible. I know I left some funk on the past three stories I did: the ninety second opus on a high noon salsa tasting contest, my extended coverage of the truly scary folks camping out for the Hell's Kitchen audition, even yesterday's turgid account of air conditioning repairman scrambling to fix all those neglected, wheezing units. Man, those guys know how to perspire! And that's alot coming from me, for I sweat like a fat man in a too-tight gorilla suit. It ain't pretty, but neither is this blinking cursor that taunts me every night. 'Peaked'. PFFT! I ain't got time to peak. I'm way too busy griping about the weather and secretly wondering when my muse will return from summer vacation. Stay tuned...
Posted by Lenslinger at 6:55 PM 3 comments:

All the World's a Stage

Forget all those buttons you gotta push, the hardest part about working a TV news camera is knowing where to put it. Take this shot of a Vegas attorney glowering at a few volumes of his law library. A staple of any law office, those heavy books in the foreground instantly contextualize the interviewee: He is so obviously a lawyer; albeit one with a slight case of indigestion. Thus, the photog responsible should be commended for so properly framing his subject ... unless of course said shooter stacked the books himself - in which this case, he did. It may not seem like a big deal to you watching at home, but to those of us with tripod blisters, it represents a fundamental debate over what we're out there doing with our cameras in the first place. Don't believe me? Check out the four pages of piss and conjecture this rather pedestrian shot is generating at on-line watering holes. But you'd better pack a lunch, some of those photogs are long-winded...

You didn't read the whole thread, did you? That's cool, even I skimmed over parts of it. The core of the argument is: What some cameramanthropologists consider harmless room rearranging, others call shameless 'staging' - a taboo practice among those committed to shooting the truth. But then again, what is truth? Is it a homeless shelter director swathed in perfect three point-lighting? Is it a stroke victim hobbling alongside some nodding reporter in a backyard rose garden? Is it a swim team coach hamming it up with a wireless microphone attached to the whistle around his neck? I ask these questions because it is easier than answering them. All three scenarios are variations on the kind of themes I've been shooting for going on eighteen years. In that time I've committed every kind of cinematic excess there is, until I whittled it all down to minimalistic schtick.

Of course you have to strip down your production techniques when you roll through the door alone. How else ya gonna squeeze through the threshhold? Most days I travel light and fast, with just enough tools to capture reality with flare, not stage an off-Broadway re-imagining of CATS. Sure, I'll kill the overhead lights, tweak your blinds and ask you not to squint, but I'm not about to fudge up your feng shui. That's for those Dateline crews - the ones who spend whole afternoons replacing the detritus of someone's hovel until the setting glistens with their trademark sheen. I'd much rather contort my lens and self around the existing clutter, find the best way to showcase the true environs of whatever talking head I'm pretending to listen to. That's not to say I've never shifted a knick-kack or two. Was a time I insisted on shooting every interview at a crazy Batman angle with purple light shooting through whatever office plany I could round up, but we all go through phases, right?

Don't bother answering. Just know that we TV news photogs put an alarming amount of thought into the images we serve up every night, both those we garnish and those we don't. Now if you'll excuse me, I goota go rustle up a giant thermometer and the backseat of an abandoned Buick. What, like you've never done it?
Posted by Lenslinger at 5:51 PM 1 comment: