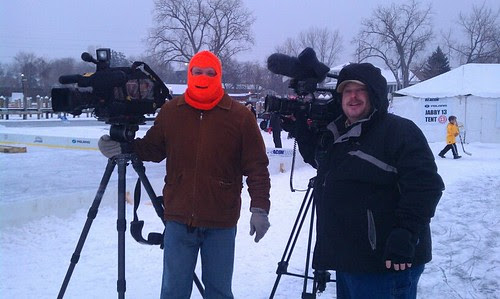 Hey kids, what do serial killers and TV news photogs have in common? Their wardrobe, of course! That and their habit of driving around with 'kits' in the trunk. You know, the kind of thing everyone keeps handy: bleach, jumpsuits, a few tarps.  Hey, you never know when you're gonna have to go cover a mudslide, wash up after a bloodbath, profile a panhandler or simply off a hobo. Either way, you're gonna want to be prepared, so I suggest staying up late at night categorizing your supplies. Hmm? No, hanging upside down in your closet while you sleep should be optional, though it may help some of those sorer torsos out there. What you really want to do is learn the location of the nearest sorority house, er Radio Shack. Look, the urge to feel the thrum of a fresh nine volt could strike at any moment. You don't wanna be circling some dark parking lot, waiting for some hero type to start ogling your logos. So know when to blend, how to hide and where to find the exits. Master that and you'll go as far as your heart of darkness or fanny-pack full of pork rinds will take you. Just keep you head about you. Hell, you may even wanna cover it up altogether. OOH, I know! Go to your local tractor-pull and see if they're still giving away bright orange ski-masks as door prizes. That way, you'll always be in style -- whether you're bum-rushing ribbon-cuttings or working on your earlobe collection.

Same thing, really.
Posted by Lenslinger at 4:57 PM No comments: 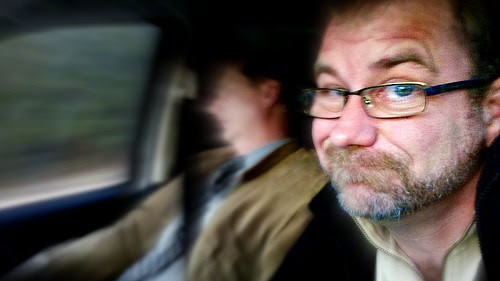 What is Viewfinder BLUES?
It's that feeling you get while freshening up a widow's porch, rearranging the rocking chairs so that sunlight will glint off the tears you're about to capture.

It's that sudden knowledge that you're gonna spend the rest of the day camped out in an electrified dumpster with promises printed on it.

It's the sensation you get when the woman who called your station demanding something be done about the problem in her neighborhood tells you she doesn't want to talk about it on camera.

It's that deep-seeded realization that no matter how many heartfelt epics you serve up night after night, the viewers just want to watch the hot chick wiggle through her stand-up.

It's that dull throb you feel behind your temples as a young colleague who's yet to master the fundamentals wonders how long it will be before he wins his first Emmy.


----------
But it is so much more. It's a self diagnosis, the kind of thing you come down with while spinning your wheels at the intersection of Pixels and Grit. It's also an excuse: "Hey I'd like to help with your telethon and all, but I got a wicked case of Viewfinder BLUES. Doc says the only cure is warm beer and a few 'WKRP in Cincinnati' episodes." And for better or worse, it's become a bit of a lifestyle. Don't believe me? Look around your newsroom. Surely you'll find an aging photog or two bitching about how the free ice cream at that last ribbon-cutting was too cold.

I get that guy. Hell, some days, I AM that guy. But by twisting grist into pithy epistles, I've found a way to live with this affliction. It's no cure, mind you. I still lapse into torpor on a regular basis; feel sorry for myself 'cause I stayed at the party too long. That's my hang up, not yours. And while I still have no good answer whenever someone asks me why I haven't written that book yet, know that I haven't given up on the idea of starting it one day. For now I'll forge ahead, knowing that, if nothing else - I got a title that says it all....

Legends of the Maw 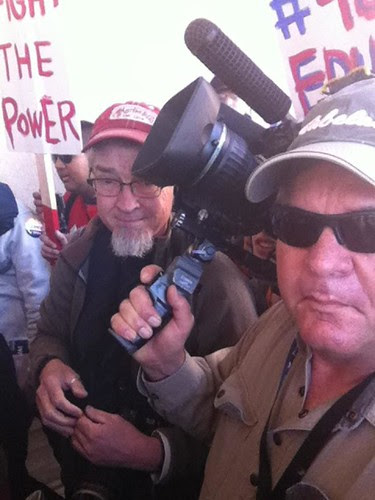 Bonfires, lock-downs, cockfights ... you never know where you'll run into (or over) a colleague.  And since it's chaos we seek, we never let it stop us from catching up. Just ask David R. Busse, a Senior Fellow with the Lenslinger Institute. Busse has seen it all, all right, but he hasn't done so alone. And when he spots a colleague across the maw, he doesn't let said bedlam interrupt his visit. Such was the case the other day, when protesters stormed the campus of the University of California-Riverside...


"Your correspondent, now 55 and proud of the fact that he recently shed knee braces and takes ibuprofen only on really busy days, jumped in the fray and moved up the stairs with the mob, certainly the only person on this campus at the moment wearing a Cabela’s baseball cap. As crowd turned the corner near the top landing, they were met by a brace of helmeted University police in full riot gear. The upward mobility of the group quickly stopped.

In younger days, your correspondent would have pushed his way to the 18-inches or so of tense air that separated youths from hickory batons. About the time he began to ponder that move, and among drum-beating, chanting and loud discussion of the moment, there was a tap on the shoulder, and someone muttering “Hey, Busse…” (pronounced bus-eee in case you were wondering).

It was the familiar voice of Kurt Miller, veteran news photographer of the Riverside Press-Enterprise newspaper, and a person with whom this correspondent had covered fire, flood and, now, insurrection, for more than three decades.

The chanting continued, but among the shoving, jostling and drumming, two veterans managed to catch up on the goings-on among respective places of employment, family stuff, retirement plans and other such weighty matters…cocktail party conversation among the jetsam and flotsam...

Ten minutes later, the protesters retreated, cops held their ground and peace returned to that side of the building. Your correspondent began to think of deadlines and image ingestion issues. A packed lunch also awaited in the back seat of Minicam Unit 51 and somewhere in that lunch bag were a couple of ibuprofen tablets."

Schmuck Alert: Get a Leg Up! 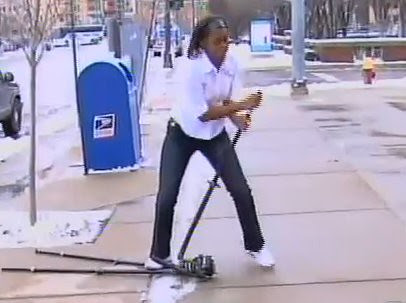 Okay, show of hands... Who here hasn't fantasized about ripping off a tripod leg and going all Billy Jack on somebody? I myself have concocted whole action sequences in my head while pacing about some deserted sallyport (look it up). But to actually do it? In broad daylight? As cameras rolled? Gentility forbids! Besides, you know what kind of tensile strength it takes to wrench a limb off a modern-day camera stand? I'm w-a-a-y too lazy for that. Plus, I got CLASS - a mental condition not shared by the crazy bitch, er, distraught family member who - in under sixty seconds - brought more shame to Detroit City than any twenty members of the Kiss Army combined. Now if you'll excuse me, I have to step away from this paragraph and collect my thoughts.

You know, we've seen a lot of savagery here at Schmuck Alert Central. Handcuff tantrums, slow-motion moonshiner spit, a veritable parade of ill-advised dropkicks... But in all our days of screening rash of acts of video, we've never before witnessed the kind of tripod atrocity as the wanton utensil sacrifice depicted in the clip below.  As with many crimes against the camera, it happened outside a courthouse. That's where the families of both the victim and defendant in a murder case left an arraignment Saturday afternoon. Free from the supervision of the courtroom's drowsy bailiffs, the relatives waste no time cursing each other and the predictable collision ensues.

Third verse, same as the first.

Or so we think, for after a few moments of rampant apoplexy, one young lady sheds her pink jacket and does something wholly unexpected. She makes a beeline for the nearest tripod, body-slams the damn thing, then throttles that weak-kneed beast in front of God and everybody. This is a new maneuver in the annals of news crew abuse and quite possibly, a sign of the apocalypse. I can only wonder what's going through the photog's mind as he pans from the general chaos around him to the methodical dismemberment of the three-legged creature he takes with him everywhere he goes. The mind reels. Worse yet, the woman manages to separate said leg, no easy feat I assure you. She then brandishes it a bit before finally following her family down the street, all the while twirling the broken leg like some demented drum majorette from Hell and leaving the rest of civilization speechless...