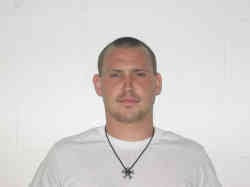 Via Photog's Lounge, word of a Midwest offensive that left a cameraman stunned and bloodied. It happened back in October, when an Oklahoma woman was attacked and killed by a pack of dogs. This of course drew a throng of onlookers to the grisly scene and when the inevitable TV fleet rolled up, friends and family members of the deceased took immediate umbrage. A verbal dispute ensued; family members insisted the news crews leave and were no doubt rebuffed. That's when Johnnie "Marshmallow" Levi Byrd broke out the haymakers, bloodying the nose of photojournalist Bryon Ackerman - before disappearing into the Oklahoma ether. Weeks later, an investigation led to a photo lineup and Ackerman easily fingered the 21 year old punk-ass as the owner of the sucker-punches. Upon questioning, Johnnie Levi Byrd folded like a two-dollar tent, admitting to the fisticuffs. He's now charged with assault and battery...

Responding to fresh tragedy is never easy. Most news crews - not all - know how to do so without needlessly riling up the natives. On the other hand, losing a loved one is horrific enough without a loitering posse of interlopers outside. I can only hope the aforementioned crews employed some modicum of respect, because I'm issuing a low level Schmuck Alert for Johnny Marshmallow here, with the following terse addendum: Sorry about your loved one. You can honor her memory by telling the media what a fine person she was, or simply flip us all off. But assaulting a member of that unfortunate scrum is downright felonious and will do nothing to bring her back. As for the ninja star necklace, we'll let that slide for now - but wailing away on a photog who doesn't want to be there in the first place is just incredibly uncool. Schmuck...
Posted by Lenslinger at 11:16 PM 2 comments: 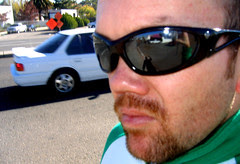 By all logic, this latest gig should have made him happy. Greater pay, more authority, a better schedule. But for the blogging-photog known as El-Guapo, that desk inside a Sacramento TV station felt like a tombstone. So he did what a lot of former news shooters do when they try to go legit. He fantasized about the lens. First they were harmless daydreams, but soon fully-engorged phantasms of life behind the viewfinder unraveled our hero. It happened to me. During my two year stint as promo pimp, I too began to hallucinate about slow zooms and fast deadlines. It got so bad I considered finding a twelve step program, but instead I plotted a clandestine return to the world of live trucks and tired logos. Well, El Guapo has done one better: He's gone off and scored himself a sports gig. Now he'll turn longer fare on his beloved athletic events -without the rash of your typical newsroom. Best of all, he'll be doing it all in Hippieville, that capitol of aging slackers that brings out the very best in his rollicking blog. Beats rehab...
Posted by Lenslinger at 10:14 PM 3 comments:

By the time I strolled into the morning assignment meeting, the dry erase board was slathered in untimely demises and the suits were looking to me for something happy. It being Monday I was fresh out of happy, so I offered the one observation I’d formed on the drive in to the station. “Sure is windy!” Looking back, it was clearly a tactical error. Having misjudged the level of editorial desperation in the room, I’d made the rookie mistake of pitching a story I didn’t much want to produce. Okay, so three words isn’t exactly a pitch, but I should have known better than to say that much around a bunch of housecats eager to get back to their chew-toy filled cubicles. I’d barely gotten those four syllables out of my mouth before they were etched in Magic-Marker under my name. Only then did I wisely back out of the room, grateful I hadn‘t burped out something worse, like ‘undertaker fashion’ or ‘colostomy bag‘.

‘Wind, it is’ I thought, gathering my gear together. Not sure where to take my pictures, I loaded up Unit Four and crawled behind the wheel anyway. Merging onto the interstate, I couldn’t help but notice the wind had died down. So I drove. I drove past construction crews and inmate work-gangs, past the usual cast of hardhats I employ for illustrating inclement weather. Trusting Unit Four to find the vortex, I couldn’t help but look to Greensboro’s modest skyline in the distance. There among the slab towers of the Gate City blew a gnarly wind indeed, lusty gusts whipping through corridors of aging concrete. Best of all, a lump of humanity would soon pour from every revolving door in search of lunchtime sustenance. All of which explains why there may have been a lenslinger sighting downtown today. Twas just I, picking pebbles and leaves out of my teeth as the silk-tie set dispensed with the wind-driven opinion.

I’ve whipped up worse.
Posted by Lenslinger at 9:26 PM 2 comments:

I have seen the future of electronic newsgathering and it's slathered in garish logos. No surprise there, I guess. But eye-bleeding wrap-job aside, this News Utility Vehicle is impressive. Dubbed ElectionLink (ugh!) by Fox New Channel, it's totally tapeless studio,a hefty 750kbps stream for live video- even while in motion. Fox News did just that on Friday, when some nutbag held up in Hilary Clinton's broom closet and demanded she stop wearing pantsuits. The resulting live shot was pedestrian at best, but the implications of such ubiquitous mobility is enough to make your average photog run off the road. Consider:

No more "We have a crew on the way". Soon the station will just punch up the shot of that flustered crew's dashboard cam, showing viewers a side of their station they've haven't seen before: the logomobile in motion ... the cursery, the lostmanship, the mastication!

If the retractable mast does go the way of the dinosaurs and cockpits turn into studios, the news unit's feng shui must evolve as well. No more press pass collections dangling from the rearview to block the shot. No more death metal emanating from your dashboard's every pore. And the fuzz growing on that old 7-ll cup will have to be addressed.

Running around town's hectic, but I got a whole posse of 'togs dying to take that thing to the coast the next time a wind with a nickname blows into town. Think the reporter look silly when's he's being blown across a hurricane's parking lot? Wait 'til we strap him to the roof of this thing.
Posted by Lenslinger at 8:00 PM 2 comments: