When I was a boy, one of the few things my brother and I could agree on was that Evel Knievel was an American Badass. Then again, we grew up poppin' wheelies in the same gravel driveway. Whenever the man in the cape would jump something stupid on ABC, we'd immediately try to replicate it with cinder blocks and two by fours. It never worked, but the resulting scrapes and bruises marked us both as male children of the 70's. Without EK's ludicrous bravado to fuel our imaginations, we'd have spent our youths riding around in circles. Instead we soared to new heights, hung on his every slow-motion wipeout and learned to live with our own road-rash. Mom may not have approved, but I dare say Evel Knievel made me stronger. He damn sure made me hurt. Whoda thunk he'd die of old age?

These days, he's difficult to explain. Unlike the legions of extreme stunt-riders he inspired, Robert Craig Knievel wasn't the least bit bohemian. Sure, he possessed Elvis' wardrobe - but he had the demeanor of a traffic cop. When he wasn't hurling himself and his Harley into the void, he was grimly reminding us how much fun he wasn't having. He may have been the Johnny Cash of Daredevils, but Evel Knievel was clearly a tight-ass in a white jumpsuit. Still, from his horrific Caesar's Palace crash in the year of my birth to his premature descent at Snake Canyon eight years later, The Man greatly enhanced my first decade on the planet - all while sporting stars, stripes and a butterfly collar. So please, raise your Bicentennial mug and help toast this deliciously conflicted American Original , for he toughened up a generation of kids made soft by too much Brady Bunch. Awkward role model, leering boozehound, gravity-bound astronaut; the Patron Saint of Testosterone has finally caught Eternal Air - so please, show some respect.

Now if you'll excuse me, there's an old action figure I gotta stick on eBay.
Posted by Lenslinger at 8:21 PM 5 comments:

Mike James is something of a hero of mine and not just because a single plug on his well-traveled website quadruples my traffic. NewsBlues, a daily take on the inherent absurdity of TV News, is read, appreciated and often hated by many in my business. Maybe that's because the man behind it rarely bites his tongue. Instead, The Surly Editor lashes out at an industry that so richly deserves it. Doing so doesn't always win him friends, but it damn sure earns him readers. Paying ones, too - at $35.00 for a six month subscription, James must turn a tidy profit off all that inanity. Recently, he answered Ten Questions posed by fellow ex-newsman Terry Heaton and the resulting screed features plenty of his trademark blister.

"TV news has lost its way. Forget the excuses. No one cares that your bosses are asking you to fill more time with fewer resources. The business is contaminated. The content is fetid and foul, shallow and pointless. Get a job selling time share. Drive a bus in Reno. Do anything but continue foisting polluted, noxious news feces on the superficial American public...Television news (if you believe it is a form of journalism) has the ability...the responsibility...to capture and preserve the moments, the events, that pass through our daily lives. Instead, it has fallen back on trivial weepies and frothy feel-goods, on medical "studies" and video news releases, or political spin and opinionated shoutfests, hypothesis, rumor, and supposition. TV news is no longer in charge of itself. It deserves to be shot at sunrise."

And you thought I was churlish...
Posted by Lenslinger at 8:05 PM No comments:

With my eyes lowered and gear held high, I chose a gingerly path amid the briars and the muck. Ahead of me, a man whose name I did not yet know how to spell chatted happily as he led me around the lakebed's edge. His voice, amplified and accented, bled from the headphones around my neck and I guessed at the vintage of the batteries in the tiny wireless microphone he wore. "There" he said, pointing to a pile of sticks in the mud, "that's their handiwork." I set my sticks aside and shouldered my fancycam. Rolling the barrel of the lens, I snapped a tight shot into focus and hit the trigger. High above, a hawk screeched as his passing shadow fell over the two of us. Thirty minutes earlier I'd ambled into the morning editorial meeting without a clue as to how I'd spend my day. Now, I found myself sleepwalking through a very special my very own episode of The Blair Witch Project. Some might call that strange. I call it Wednesday.

Actually, it wasn't all that bad. Kerry Jones was a nice enough chap. The paint store employee had phoned El Ocho the night before, with tales of as beaver dam you had to see to believe. That kind of talk doesn't make the sat trucks roll, but it's just the kind of quirky coverage I specialize in. So it was that I followed Mister Jones into the muck, grateful to be far from any idling live truck and glad my guide didn't seem crazy after all. Instead we'll call him 'enthusiastic', for his zest for freshwater architecture knew no bounds. Not that I'm complaining. Hell, I wish more good folk would ring up their affiliate whenever something weird enters the radar. That way I don't get stuck on some incarceration opera downtown, far from the pudgy obstructionists of Oak Hollow Lake.

Trouble is, beavers are notoriously camera-shy. No matter how much phone tag or footwork I put in, I couldn't convince a single member of the local beaver guild to agree to an on-camera interview. Thus, I was reduced to framing the evidence: gnawed-sharp tree branches, pockmarked mudbanks, an temporary reservoir for a species unseen. It may not be your idea of compelling television, but I'd rather spend a shift up to my ankles in dried-up lake muck than sitting on my ass at some city council stand-off. Therefore, I never complained once about today's gig - not on scene, not in the edit bay, not at my desk as I pounded out every single word my anchor might think to say on the subject of drought, ingenuity and engineering instinct. I, on the other hand, remain off-screen, knowing that however many viewers watched this spot, none would think about the poor schlub tasked with bringing it to screen.

That ain't always bad.
Posted by Lenslinger at 7:34 PM 1 comment:

It began with a simple traffic stop - though in retrospect, it wasn’t all that simple. See, the man in the white Escalade was wanted by the Secret Service for scamming the elderly out of their nest eggs. When the Greensboro police officer pulled him over, he panicked. As the officer approached on foot, the man behind the wheel shot himself in the head. Soon he was in the back of a screaming ambulance as it sped toward the closest ER. There doctors pronounced him Dead On Arrival. 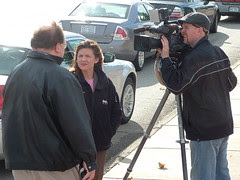 A half hour later, I paced the perimeter of what was now a crime scene, wondering what the hell caused so many undercover police cars to clog this anonymous parking lot. ’Suicide’ muttered a passing cop, but that didn’t explain the haphazard fleet of Crown Vics. After shooting just enough footage to prove I’d been there, I stashed my fancycam in Unit 4 and grabbed the battered Fuji snapshot camera that lives in my run-bag. Down the way, fellow El Ocho staffers Angela Rodriguez and Tim Bateson had a police spokesman framed and cornered. But the portly detective wasn’t what I wanted in the crosshairs. Rather, I yearned for a close-up of Bateson’s most righteous Fu Manchu. Moving in for a proper shot of the twisted whiskers, I snapped a few frames before turning toward my trusty steed.

That’s when my Fuji’s lens-hood, a stout plastic tube warped from earlier abuse, separated from the small camera’s body. In slow motion it fell toward the pavement. I lunged forward to catch it, but could only it watch as it stuck the pavement. On impact. the battery door broke off and four half-dead double AA’s took flight. But it wasn’t over. The camera…bounced - off the sidewalk and over the curb. “Nooooooooo!” I screamed as I dove toward the waiting storm drain. Before I could reach it though, the mortally wounded digital camera took another bounce and passed through the underground gutter’s gaping mouth like some pool shark’s trademark trick-shot. The sound of crashing plastic and the dull thud of my forty year old torso caused the intrepid news team to look my way. Bateson, photog that he is, began to roll.

Would you believe the stinky thing still works?
Posted by Lenslinger at 6:42 PM 6 comments: