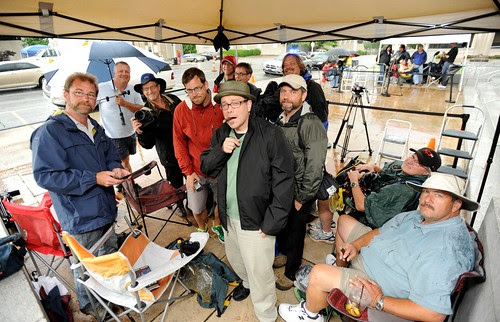 Hey Moms and Dads, got a kid who's interested in broadcasting? WE CAN HELP! Just send him (or her) to The Lenslinger Institute's first ever field seminar - currently being held outside John Edwards' federal trial! Drop your (clearly troubled) teens off with us and we'll teach 'em how to read light, measure sound and fold time. For a limited time, we'll even school your adolescent in the fine art of asshole avoidance! HOW do we do it? Simple! We strap them to a wobbly stepladder, pummel 'em with elbows and browbeat them nearly senseless! But wait, there's more! Get 'em here before the defense rests and we'll make sure they'll never again express an interest in Communications. It starts with a pre-dawn cable course, transitions into a midday endurance test and culminates with the kind of late afternoon panic attack that'll send your little layabout running straight for the nearest Coast Guard recruiter! It's cheaper than reform school, better than water-boarding and nearly as senseless as those team-building workshops corporations spend your bonus on...

But just WHO can turn your TV News wannabe into a useful member of society? Our crack staff of highly jaded journalists, that's who! This rough but loving crew of camera operators, sound recordists and assorted engineers are committed (or should be) to preventing future generations from making the same mistakes we did. We'll treat your once precious youngster like they owe us money, douse them in fast food grease, even show them never before seen footage of the Tanning Mom. Don't ask where we got them! Just know that your child's future is as important to us as our next deadline. In fact, we won't rest until they're broken mentally, physically unsound and unwilling to even turn on the TV, let alone aspire to work inside one! But our instructors won't stop there. We'll relieve them of their pocket change and share with them the kind of real life road stories that would make a TMZ shooter blush.

WHY do we do it? Because underneath our scruff and gruff, we really care! At least as much as a member of the media can. Truth is, our staff is pretty emotionally damaged, if not outright estranged from most of their family. We didn't plan to become like this, but decades of deadlines and  the rub of a thousand newscasts have rendered us virtually empty inside! It's a condition we wouldn't wish on many, which is why we won't let your teenager so much as sleep until he (or she) renounces all interest in mass communications of any kind. It's not always a pretty process, but once we're through with that little bastard, he (or she) won't so much as plug in an iPod without suffering post traumatic stress disorder. It sounds harsh, but when a kid fixates on the Fourth Estate, a future math teacher dies. That's bad for America and while most of us are banned from campuses, the further decline of western civilization is something we simply can't abide. So don't delay, for the very quality of your retirement home lies in the balance. Act now and receive a souvenir photo of your kid grimacing behind a philandering millionaire! Otherwise, we'll soon see you outside your family therapist's office. We'll be in the bushes, snapping towels and taking over/under bets on which of your kids lives with you forever! Just don't say we didn't warn ya!

Meanwhile, back outside the John Edwards trial, an unforgiving sun is melting brains along tripod row. Or maybe it's just me. All I know is that some time this afternoon delirium took over and for a second TV News felt like a viable career choice. Then suddenly I snapped out of it and realized I was A.) perched on a step stool, B.) dressed like a third grader and C.) perspiring at an alarming rate. About that time someone shouted "Lawyers UP!" and, like Pavlov's sweatiest dog, I swiveled at the hips as three sharply-dressed strangers filled my lens. As they passed my position, I zoomed in after them until they disappeared inside the federal courthouse. Rinse and repeat. For more days than I can count, I've weathered the elements on the stoops of justice, only my fellow castaways there to mock, er comfort me. Okay, so there ain't a lot of comfort available when you're clocking some philanderer's shame at three thousand feet.

Me, I'm just trying to pace myself. Prosecutors have yet to rest their case and the temperatures are already in the 80's. By the time John Edwards gives us the collective finger and runs back to Rielle, it'll damn near be a hundred. I'll be passed out on the pavement by then, but don't be surprised if my inert form is sporting a grin, for I have (almost) enjoyed my time at Camp Edwards. Can't explain why, really. The hours are long and the work is tedious, but the company can't be beat. Sure, there's an ass-hat (or three) in every crowd, but as whole, the motley collection of freelancers, locals and network news crews have been delightful. That's high praise coming a from a guy who doesn't particularly like people. It helps of course that we're all tasked with the same silly mission: Document Edwards' every step between his chauffeured Suburban and this hall of justice. Oh yeah, get everyone else who walks in or out, too. We'll figure out something to say about them later...

Got it? Good. Just show up here around seven with your favorite fancycam. Pack some snacks, too. Court breaks for lunch, but you'll probably spend that time hunched over an steaming laptop editor while your reporter checks her tweets from the front seat of your smelly live truck. Afterwards you'll wanna boot-scoot back over to the courthouse steps - just in case Edwards face-plants, confesses or breaks into song. Scoff if you will: the ONE time you bail on a federal defendant's walk-down is the day North Carolina's sexiest lawyer goes all Jim Bakker and you're the only news crew without fresh footage of a quivering millionaire being frog-marched in front of the judge. Okay, I'm projecting a bit but can you blame me? Watching our once celebrated Senator waltz in and out of court, one gets the feelings he like his odds. That's cool by me, I guess, but I didn't give up six weeks of profiling dogs in funny hats just to watch Edwards melt back into his wealth. I want drama! Intrigue! Indemnity, even!

And some lemonade. Some really COLD lemonade. Perhaps with a little vodka in it. You know, for the medicinal value...