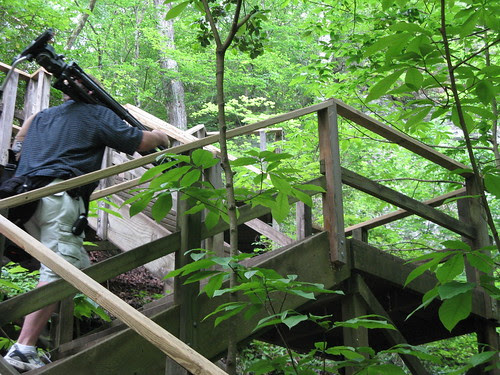 There's a mock motivational poster in the above photo somewhere, but in my current funk the caption eludes me. Nothing's wrong, mind you - just a week when the words won't come. It happens. When it does, I loiter and brood 'til the angst builds up until eventually I sate my need to communicate with a java-induced internment in my upper lair. What I've learned NOT to do is fret too much about my missing mojo, for as soon as I grow convinced I'll live the rest of my life as a shackled mime, I'll start fingering couplets of dust on the coffee table again. (My wife HATES when I do that.) So, while I stare at the wallpaper for clues to my next narrative, take a couple of minutes and watch this travelogue on Falls Lake State Park. It's just one of thirty-nine such havens of nature in the great state of North Carolina and I'm always happy to explore their leafy cathedrals - even if it does mean humpin' my gear up six stories of rickety wooden stairway. It's probably the only corporate ladder I'll ever climb...
Posted by Lenslinger at 9:25 PM No comments: 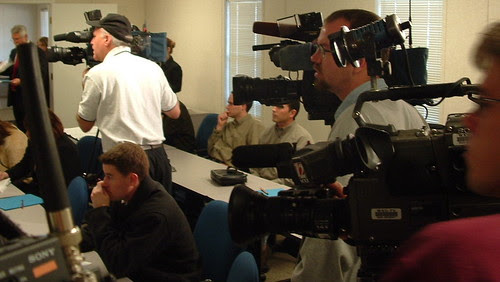 Just ask any speaker who’s heard the distinct sound of cameras being taken off tripods three minutes into their opening remarks. 'It’s nothing personal, Governor - but you and I both know nothing you say up there will make the evening news. Sure, we'll flesh out what ever you're talking about with pictures and such but if we use more than three seconds of this staged event my reporter's even lamer than I thought. So, try not to muck up while I wander around the edge of the room looking for wide shots, reflections and perhaps a danish or two.' At least that's what I want to say when I break away from the tripod cluster, but I never do. Instead, a buddy and I camera-joust around the room like a couple of hammy Jedis in one of those awful Star Wars sequels.

Why, exactly? Well, news photographers are hyper-competitive and dedicated to making even the most mundane occurence look interesting. That isn't always possible, but you're never going to differentiate yourself by stagnating near your sticks. Drag your camera to the doorway, put it on the floor and lean over it like you know what you're doing. You may not get much of a shot - but you'll drive the other photogs crazy. A lifer or two might roll their eyes, but most rookies will wait only about five minutes before replicating your exact move. That'll be fun to watch - plus it'll give you seomthing to bag on the new guy about the next time you two are babysitting a meth-lab takedown.

These days of course, there's a new breed running free. A friend of mine recently told me of observing a multimedia producer at an Obama rally who - after locking his baked-potato-cam on a wide shot of the candidate, slumped over his laptop and dictated the speech word for word - never once looking up to make sure his camera was centered, rolling or in need of some fresh toppings. I guess he was just there in case Barack got sucked into the belly of a passing space station, I dunno. Whatever his motive, the resulting footage couldn't me too much fun to watch - unless you're into depositions. Me, I'm still committed to ringing every vista dry of possible shots - even if it means knocking over a row of folding chairs with a particularly clumsy backflip. Now, loan me your wide-angle lens and we too will rule the universe as father and son! Or at least get lunch.
Posted by Lenslinger at 10:28 PM 3 comments: The CP16, the battery belt, that dour expression ... she's like Janis Joplin with a lens. But who is she really? Why, I think it's Cyndy Green, visual journalist, educator and chief lifeforce behind the site VideoJournalism. These days, Cyndy teaches high school students, but back in the 70's she was a lady lenslinger of the pioneer variety. That's why I believe the photo she attached to an illuminating post on the origins of a certain broadcast term is none other than Cyndy herself. Otherwise, it's some other scrappy temptress who proved electronic newsgathering wasn't just for the fellas - all while I was wearing a groove on my little league bench. Now go check out her blog and while you're there, be sure and bow down to the power that is a heavily-armed she-slinger. I'd join you but, well ... I'm a little too turned-on right now.
Posted by Lenslinger at 9:58 PM 3 comments: