Forget that More You Know crap, I need a PSA Campaign that'll hit touch TV news shooters in a way they won't forget... Enter Lenslinger Emeritus Ron Johnson, who (almost) went out of his way to get an important message out. You know, Roid-Raging Rent-A Cops and untethered weatherman fans aren't the only dangers we photogs face. Speed bumps, mop buckets, third graders ... each can unmake your day if for only an instant you forget that TV show you're watching so intently isn't shooting itself. Remember, only rookies get lost in the 'cup. You'd be better off wearing one. So look up and live, for one day you may wanna procreate. Protect your gear. Gird your loins. Otherwise, you'll be laid up with a bag of frozen peas on your junk while your girlfriend post rolling scrotum updates from her new Instagram account. Not even Mark Zuckerberg wants that. 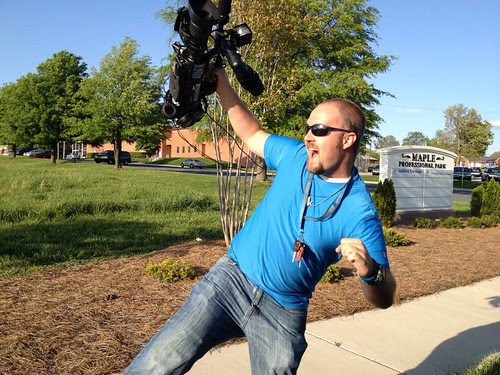 Sure, I'M crustier than that slice of bread you left in the toaster last month, but there is hope for the photog nation. Proof: JD Angel. (JD Angel? Didn't they open for Whitesnake in '89?) With his youthful exuberance and authoritative lanyards, this youngster roams the open plains of El Ocho proper, reminding seasoned 'slingers of a time when being a TV news stevedore held all the promise of an actual career. Now, I don't know JD well, but I've seen him high-five himself enough times to recognize the clinical joy of early ENG freedom. Who am I to crap on that? It wasn't long ago that I was JD - though with considerably more hair and just a dash of acid-washed denim. It wasn't pretty and looking back I clearly recall a few older guys rolling their eyes at my endless vigor and budding mullet. Thus, I'll  refrain from passing judgement on an earlier version of myself, for this industry has long prospered on the broken shoulders of grinning greenhorns. So fair sailing, JD! Gorge yourself on all that fresh access and don't let any of those grumbling old farts back in the edit bays bring you down. They're only envious of your energy and jealous of your joy. Just do me ONE favor...

Watch where you that sling that thing, would ya? You're scaring the old folks.
Posted by Lenslinger at 10:31 AM No comments:

Schmuck Alert: He Hates These Cams! 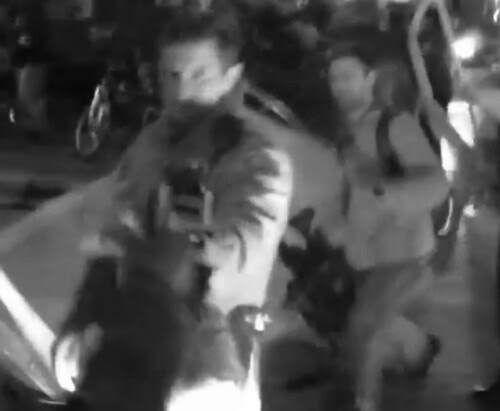 Ahhh, protestors. I have little use for them. It's not that I don't respect their right to dissent, I do. But in my twenty years behind the lens, I've seen many a protestor up close and I can safely report the mass majority of them don't know (1-2-3-4!) what the hell they're fighting for. Perhaps it's my blue collar roots, but I have a hard time listening to a college kid who's yet to earn a dime of his own money scream at me about what's wrong with the world. Hey, here's a thought: grab a shower, join society and fight injustice from the inside. You won't score as much weed in the process, but you will be surprised how much you can accomplish with reasoned discourse, instead of that old bongo you found in your uncle's storage unit. That said, there's only ONE thing I detest more than guy with a homemade sign: some asshole cop who thinks the sight of hippies in the park is a blank check to crack some heads.

And if grainy video is to be believed, that's exactly what happened in Minneapolis Saturday night as police moved in on a group of Occupy Minnesota demonstrators. Seems the young people were determined to set up their tents in Peavey Plaza and Loring Park, a plan that filled law enforcement officials with such apoplexy, they decided to go medieval on any and everyone in sight. Don't believe me? Check out the video. You'll see heavy-handed riot cops doling out ass-whoopings to anyone they could lay gloves on. Recording devices received much of their wrath, for what's more infuriating than a dude with no discernible income and a four hundred dollar phone in his hand? That's a judgement call you'll have to make on your own, unless you're one of Minneapolis' Finest. They seemed to agree beforehand that iPhones were the enemy of the state and only unnecessary roughness could guard society's loins from this Cupertino-based threat.

If that wasn't brutish enough, one coiled constable took it a step further, upending a photog's fancycam for no. effing. reason. It's sickening to watch - even if you don't have a groove in your right shoulder like I do. KSTP's Chad Nelson was busy minding everyone else's business when a uniformed officer took umbrage at the photojournalist's silent witness. Without so much as a "Stop or I'll shoot!", said officer shoved the expensive camera off Nelson's shoulder, slightly injuring him in the process. Ya know, cops - like photogs - don't make the money they should. Willfully damaging an innocent TV camera is akin to dropping an anvil on one of those flashing highway signs. It's dangerous, criminal and highly uncool. But so too is declaring martial law on people you disagree with, let alone some poor working stiff who has every right to put your badge number on screen. Which is why I sincerely hope Officer Pushy gets what's coming to him, for through his tantrum, he lowers the standing of the many honest law enforcers who keep our cities and streets safe from marauders, pestilence and the occasional musty trustafarian. 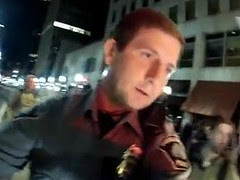 New video of the despicable act has surfaced, clearly showing what some here at The Lenslinger Institute has described as "a bitch move". We've also received word that KSTP Photog Chad Nelson will be filing a criminal complaint. Bravo! As for the cop in question, his name has yet to be released, but across the nation past associates of the man have gone on-line and recognized his sanctimonious shit-house grin as one of the many things they don't miss about him. We here on the TLI campus have only shake our heads and wonder what would turn a seemingly sworn officer into an unrepentant schmuck.

It has come to our attention here at The Lenslinger Institute that our feckless founder can't find his focus. This conclusion was reached after much deliberation, protracted staff meetings and the unfortunate surfacing of a video which clearly shows you-know-who offering black market wedding video lessons to a confidential informant. We here at TLI regret any loss of street cred suffered from our leader's lapse of judgement  and we're especially sorry about his unplugged karaoke performance of 'Every Rose Has Its Thorn'. Really, the man has no discernible musical talent and he looks positively ridiculous in a star-spangled bandanna. While no 'medical' examination has been preformed, we fear the artist formerly known as Lenslinger has, for the moment, misplaced his mojo. Perhaps it was the recent loss of his favorite light stand, constant exposure to non-linear timelines or the spectacular lack of uproar surrounding the recent publication of his poetry book "I Know Why the Caged Turd Slings".

Whatever the reason, it has become clear our leader cannot continue down this dangerous path, lest he further devolve into the once promising but now totally nut-bag personality disorder made most famous by the likes of Howard Hughes, Gary Busey and Michael Rosenblum. Thus, we have taken the liberty of sequestering mankind's leading Schmuckologist in a softly padded cell here in the bowels of The Lenslinger Institute, in hopes he'll see his way through this mental torpor and once again grace us with unfunny photog screeds, pointless top ten lists and the occasional self-serving sermon. It is our great hope that he do this soon, otherwise the diminishing demand for said web detritus will convince our mercurial leader it's finally time to pull he plug on this labor of love and devote his remaining energies to polishing his expansive press pass collection.

Meanwhile, know that your newsroom boredom, photog lounge downtime and smartphone fondling habits are of utmost concern to us and and as an act of good faith we offer full and total recompense to any reader who feels cheated by this sudden lack of free updates. Simply dial 1-800-PISS-OFF and wait for the far flung operator to begin berating you for making the effort. We'd like to offer some kind of launch date for the new and improved Viewfinder BLUES, but until Old Whatshisnuts stops feeling sorry for himself and starts answering our texts, we'd only be spit-ballin'. However, it remains our firm belief that this period of transition will well be worth it, for said 'Slinger in Chief is a good (and only occasionally delusional) man of infinite syllables and limited intellect. We wish there was an easier way to jump start dude's muse, but after a thirty minute search of the iTunes archive, we've determined there's simply no app for that...