A cynical employee turns his workaday blog into a confessional bestseller? Is there any wonder I lept over three petulant Breaking Dawn fans to grab a copy of WAITER RANT? No, there isn't - so let's get started: 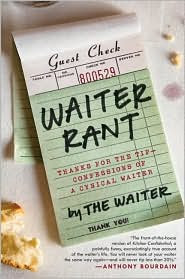 An ex-seminary student who stumbled his way into a waiter's apron, this thirty something schlub finds he has a knack for gratuity-based servitude. Soon he's waiting tables at a posh Manhattan eatery, hustling customers, mastering the staff and ruminating all the way. When he starts an anonymous blog the damn thing takes off and he begins to document the tableside atrocities and simple graces he bears witness to every single slam-packed shift. From high-end diners who see him as peasant to new age foodies who fondle his menus, Steve Dublanica - aka The Waiter - delivers a rogue's gallery of upscale customers, plus all the drifters, saints and deviants behind the scenes of your favorite above-average bistro. Despite the requisite ringer (he'd never spit in your food just because you're rude, but he might ask that three pack a day smoker back in the kitchen if he will), Dublanica nonetheless does a great service to a job he finds both compelling and fecund. Along with all the dining room debauchery, he adroitly examines his lack of career path and mines it for even more material. His anguish is as delicious as it is oddly familiar and I'm a new regular at his popular website. Hopefully I can get a good table...

(As for my book, it's still an amorphous mess. Much love to those who've tried to help me and to those still determined to do so. I'm confident it will happen but have learned to not let it make me crazy. I only hope that when I do, it will rank among my own list of favorite occupational memoirs, like Rivethead , Eyeing the Flash , Kitchen Confidential, Riding Rockets and Blue Blood. Someday...)
Posted by Lenslinger at 7:48 PM No comments: 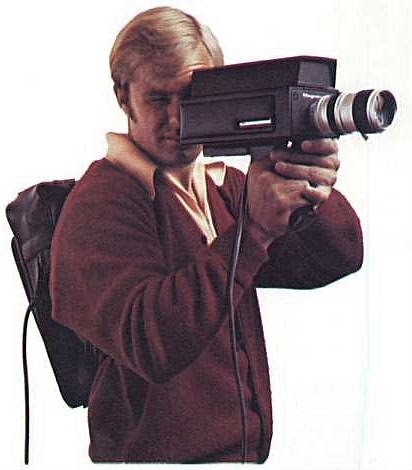 Sure, you’ve feathered back those sideburns and that groovy sweater really showcases your butterfly collars - but if you’re ever going to be The Man down at the discotheque , you’ve gotta get yourself some heavy glass. The Chromavue 550 is just that - HEAVY! With its sleek backpack recorder and unique handheld styling, this is one mini-cam that’ll hit it Big with those foxes over at Studio 54. But don’t wait! The Bicentennial is just around the corner and you want to be ready when all the ladies in your life start sporting those red white and blue tube-tops. So boogie on down to Stan’s Camera Shack and do yourself a solid with this sexy hunk of space-age technology. As futuristic as those Planet of the Apes movies, as timeless as that avocado green fondue set you just bought, the Chromavue 550 will wear a groove in your shoulder that’ll tell everyone you’re out of sight! (Aqua-Velva not Included.)
Posted by Lenslinger at 9:09 PM 2 comments:

While I slog through ribbon-cuttings here in the States, Chris Jackson is rushing headlong into peril far from home. The Fox News Channel freelance cameraman was on patrol with Marines in Afghanistan Sunday night, when a roadside bomb ripped through their Humvee. Oliver North of all people was traveling in the same convoy and witnessed the veteran photog's reaction to the fireball. He “walked right back into the flames [and] rescued one of the wounded Marines.” Jackson didn't have much time; ammunition inside the burning vehicle began firing off before he and others could extricate the wounded. Jackson and the two Marines riding with him were treated for leg injuries. The camera did not survive.

Lately, Afghanistan has been in the news for all the wrong reasons. With many Americans bogged down in the political trappings of the Iraqi morass, the struggle to control the Taliban stronghold has become a forgotten front. That changed last month with one of the most ferocious attacks in that theater's history - one that took the life of local boy Pruitt Rainey. These tragedies, along with the upcoming film release of Marcus Luttrell's excellent book Lone Survivor, will no doubt place the Afghanistan front back into the American imagination. But thanks to embedded photojournalists like Chris Jackson we have more than our imaginations to go on when trying to envision what it's like over there. RUH-spect.
Posted by Lenslinger at 1:38 PM No comments:

Gone with the Wyndham

I looked over at the golf pro, then down at my watch. 3:50. The newscast scheduled to begin in seventy minutes would do so with gaping black holes if I didn’t get back to the station soon. Deep inside the fancycam at my side, an optical disc I’d chosen at random now bristled with images: close-ups of a chainsaw spitting woodchips, headshot of some feckless official stuck on perma-drone, an architectural sweep of a few government buildings… Nothing earth-shattering, just the twisted innards of a typical show. I’d traversed the Greater Piedmont all day to collect my debris, until a late day page sent me racing for the links where landscapers and electricians were busy prepping Sedgefield Country Club for next week’s date with the PGA. I’d just finished grilling the golf pro for some on-camera sound when he inquired as to whether I’d need a ride. Apparently he didn’t grasp the brunt of my itinerary, or the number of shots I could accrue from a single tripod spot. No Sir, I had little time to roam the greens in something as silly as a golf cart! Looking up from my watch, I fixed my steeliest gaze on the fella with the polo player on his tit and with white-hot conviction said,

Ten minutes later, a leathery man with a rake in his hand nudged his buddy to get out of the way as a golf cart swerved out of nowhere and into their path. Behind the wheel, a furry face with a highway drifter grin plastered on it hunched over eight white knuckles as a wrinkled Hawaiian shirt billowed all around. The two men thought they spotted the glint of a lens at the stranger’s feet, but couldn’t see more due to the plume of fresh grass clippings kicked up by the cart’s silent wake. “Cago en tu leche!” I heard one of them hiss as I tried to press the oversized accelerator through the floor. I don’t know that it made the golf cart go any faster but it sure as hell cleared my head. And isn’t that what golf’s really all about?
Posted by Lenslinger at 10:18 PM 2 comments:

Scoffing at the Apocalypse 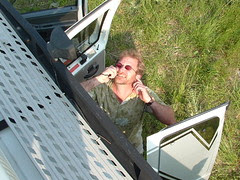 Alien craft are hanging over the broadcast landscape, ancient plates are shifting beneath the Fourth Estate, high-priced wisemen are lunging for each other's throats and I feel perfectly calm. It's not that the distant rumblings don't give me pause; they do. But as a member of the invisible class, I feel less imperiled by the great media upheaval already in play. That's not that photogs will have a free ride. Like everyone else in this (soon to be) hemorrhaging industry, we'll soon be asked to do more, to work outside our areas of expertise with gear you once deemed unworthy of your very touch. Don't like it? Go sell effing shoes. The newest of the suits are counting on many of you to do just that, especially the ones pulling down better bank than the college kid they're about to pay in backslaps and blog credits. Think it can't happen? Ask the dude with the frat pin on his cable station's camcorder. The one blocking your shot.

Yes, as hard to believe as it is, this business is about to get even more cut-throat. That's hard to grasp in an industry where we eat our young faster than soccer players stranded in the Andes, but it's true. Caffeinated show stackers will be expected to edit their own video, prom queen reporters will be handed consumer-cams to go along with their 8 by 10 glossies and somnambulant news shooters will be required not only to stay awake at press conferences, but to ask questions, scarf an agenda and pop off a still shot or two for the web. Of course many in the trenches will refuse to develop any such new skills and delicious attrition will ensue. Darkness will fall over many a TV geek's dream as a line of work once considered competitive enters whole new realms of ruthlessness. Throw in scores of bug-eyed refugees from the Great Newspaper Masssacre and you have one very crowded, fractured field of play. Still wanna make TV? So does the lifestyles editor with the Sony of his owny.

So why on Earth would I be reaching new levels of Lenslinger Zen when my very universe is in such a state of flux? Simple. I got mercenary skills. Unlilke many of my colleagues, I never developed a specialty - other than making deadline by any means necessary. Whereas most photogs and reporters team up with another for constant collaboration, I've often chosen to go it alone. I've done so to challenge myself, to avoid live truck clusters and because Roy Hardee taught me that Write-Shoot-Edit could be a way of life. Looking back, I wouldn't change a thing, though the solo route has rarely been an easy road. Turning stories unencumbered by another has always earned me respect from producers, derision from reporters and death-defying expectations from the assignment editors in my life. That's cool by me; glory was never my strong suit. Hopefully I can retain whatever decorum I have in the coming reconstruction, for staggering new platforms are shooting skyward every day and raining down debris on a herd of overly padded news-gatherers.