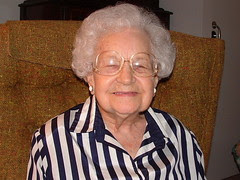 We all feel cheated somehow as teens, but even on my most sullen day I knew I’d been granted the perfect Grandmother. From her cotton-white hair to her singsong name, Rosa Mae Canady was a vessel of sweetness and spreader of joy for 97 years. I first knew as the lifelong wife of a tough but loving man; a resourceful, horn-rimmed lady who wore a white an apron in the kitchen and matching hat and gloves to church. When her husband suffered a debilitating stroke one awful night, I saw my Grandmother assume a different role: as the ever-present caretaker of a proud but crippled man. Rosa Mae tended to Newett’s every need until his death a decade later, bringing to an end their sixty-one year marriage. By then she’d aged into Great-Grandmother status, a smiling, white haired lady who’d offer you hard candy when you didn’t want it and a hug whenever you did. What more could a boy ask for? 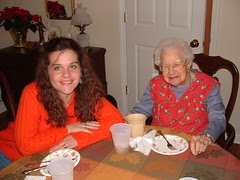 Of course to hear her tell it, she never accomplished very much: never owned her own home, never held a fancy job, never completed her education. Reluctantly, she’d dropped out school in the seventh grade, joining her mother in the cotton mills of Clayton, where she worked late and early to help feed her younger siblings. Rosa Mae Morgan never did go back to school, but she worked in sales for many years, her gentle smile and pleasing nature serving her well in the world of retail. Later in life, she managed a neighborhood newsstand and is reported to have run a very tight counter. Mostly though, she raised her three children through the ratcheting tumult of the mid twentieth century, feeding them well in every way. When they wed and began having babies, she continued her role as Soother in Chief, providing all with endless hope and a reservoir of reassurance. 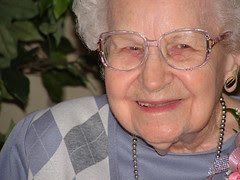 By the time I came along, she had the joy of living down to a science, or should I say Faith. For more than seventy years she attended First Baptist Church, eventually becoming their oldest living member. She studied her Bible and read her daily devotional- along with the Goldsboro News-Argus. Countless are the times I sat on her couch, leafing through a stack of fading newsprint she was saving for a neighbor lady. She liked TV too. From Lawrence Welk to Carol Burnett to Dancing With the Stars, she’d watch it ALL. Imagine her delight when one of her seven grandkids started popping up on the local news in a series of bad neckties. She was proud of me and said so; as long as I didn’t interrupt her stories in the afternoon. The she offered me another piece of hard candy, despite the fact I never once took it. 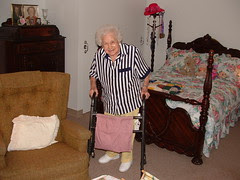 She was well into her nineties before her body started failing. Her spirit never did; through a series hearing aids and prescription lenses, she remained as bright and lighthearted as the days when she was a pretty teenager winning boyfriends on the Carolina coast. For many precious years she was a steady presence at family gatherings, mining more joy from a single piece of pie than most folk could find with a fortune. Even to her more melancholy descendants, she was a living marvel - a gentle soul who never let a hardscrabble start or ailing old age take away her joy of living. It’s a trait I didn’t fully inherit but have studied up close for years. Only today, when this lady of limited means but infinite twinkle took her last breath before me, did I realize the lesson was done.

Crimes of the Camcorder 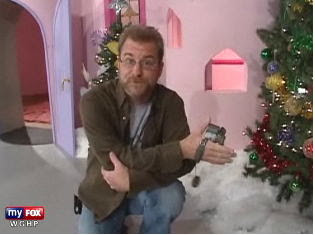 It's not often The Suits surprise me. This morning, they did. For no sooner had I waltzed into the morning meeting - confident I'd spend my last day before vacation editing this piece on a local cheesecake palace - than I noticed I'd picked up an additional assignment.

"Hey Stew, we want you to do a little thing on shooting better home video. You know, go on camera and share some of your wisdom..."

I turned slowly from assignment editor to producer to news director, then looked up, expecting Ashton Kutcher to drop from the ceiling tiles at any moment and envelope me in one of those insincere bear hugs. When that didn't happen, I looked back at my bosses and replied the way I always do whenever I think they're trying to punk me.

With that I turned and left the conference room, wondering how long this 'little thing' would take. Turns out, it didn't take very long at all. That's because I has very little time to give it. After hammering out my initial project, I slumped at my desk and pounded out a quick script about the fundamentals of good video. Then I read over what I'd written and dumbed the whole thing down to about sixth grade level. Still unhappy with it, but anxious to end the year's longest three day work-week, I threw caution to the wind and hit Print. But instead of finding an anchor to voice my thoughts, I followed the whiff of a holiday cheese-log all the way to Studio 'B'. There I rendezvoused with veteran shooter Jeff Kilduff, who stopped rolling his eyes long enough to shoot my stream of consciousness lesson on how to take the 'suck' out of your home video this Holiday Season. Fifteen minutes later we were done, and whiel I still wasn't sure I wanted to foist my visage on the greater Piedmont Googolplex, I proceeded to the edit bay and ordered take-out. One righteous steak and cheese sandwich later, I emerged from sequesterment, confident that - while Anderson Cooper can rest easy - I'd at least avoided embarrassing myself too much.

So here you go: Crazy Uncle Stew's Video Primer. The tenants I espouse in it are the same ones I break on a daily basis. The cute kids featured within are not mine, but rather that of the aforementioned Mr. Kilduff. I'm told it aired around 5:45. I wouldn't know; I was on the interstate by then, air-drumming on my pick-up's steering wheel and puttting the last workday of 2008 far behind me. I'm traveling East now, to see my Grandmother. Merry Christmas.

December in the Trenches 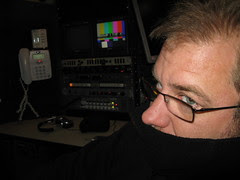 Sure, you're at home gift-wrapping slabs of last year's fruitcake, but I'M STILL OUT HERE WORKIN'! And let's be perfectly clear: committing television thisclose to Christmas is no holiday. In fact, it's hard labor! Why? Well, for starters, TV stations graciously allow half their staff to clear out once the November ratings book is done. As a result, the month of December is a sparsely populated one - with professional broadcasters actually enjoying vacation time with their families. Weird, huh? Stranger still, said station insist on producing the same number of newscasts - despite the fact that the majority of their ground troops are missing in action. I don't know why exactly: something about the 'revenue stream' Whatever! All I'm really sure of is that no matter which part of December I take off, the rest of my workdays are spent chasing 'General News'. 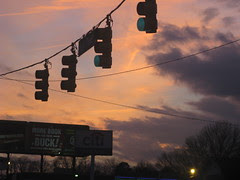 'General News'; that's Slinger-ese for "Ain't there a band camp I can shoot?" The answer of course, is a resounding 'No'. I, along with every other photog who considers himself above the fray, grabs an equally unfortunate reporter and saddles up in a musty live truck. If that weren't drudgery enough, the end of the year around here tends to be C-C-C-COLD! Late '08 has been no exception, for as soon as I was reassigned to the front lines, Old Man Winter blew in and shoved icicles up the collective ass of the Fourth Estate. Thanks, Pops! At least now when I'm stretching blurbs into exposés, I know my blood won't clot - as it's pretty much frozen solid. Seriously, can we have a solid month of reasonable weather once in a while. Remember, I'm the furry white guy who writes whole operas on the demonic nature of Carolina summers. All I'm asking for is a mild temperature or two, not waves of locusts or low gas prices... 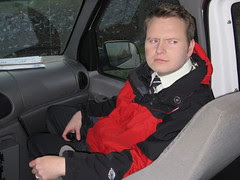 SHHHH! Don't say anything, but Chad's looking at me again. Can't say I blame him; we been joined at the tripod for two days now and I do get a little punchy. Maybe if I sit here real still, he'll go back to dithering with his cellphone. Don't get me wrong; I like the guy. He's a fine reporter, a published author and by most accounts, the King of King. Hell, he evn cut his TV teeth at my broadcast alma mater, WNCT! But these are endtimes, after all: massive lay-offs, weird weather, Paula Abdul still on Idol. It's enough to make two mil-mannered Southern boys turn on each other. Why, earlier Chad and I shot of a profile of a local cheesecake shop and I SWEAR I caught him eyeballin' me by the Creme Brulee. He does it again, I just might icepick him out by the satellite dishes and blame it on some passing drifter. Who's gonna tell any different? PFFT - no one reads THIS drivel....
Posted by Lenslinger at 11:21 PM 3 comments:

"Where do you go after you've been to the Moon?" That's the vexing question behind Moondust: In Search of the Men Who Fell to Earth. Journalist Andrew Smith is my kind of space enthusiast: one who’s less concerned with what was on the lunar module’s control panel than what was on the minds of the men who parked it on the Moon. But when he vows to track down the nine remaining humans who put boot to Luna, even he worries they’ll be uptight throttle jockeys. He’s only partly right. From the moonscape painting Alan Bean to the increasingly mystic Edgar Mitchell, Smith finds not every aging space cowboy who set boots on Luna fits the classic astronaut mold. And what a mold! NASA chose carefully the humans they threw at the Moon, favoring men with cool heads, trim torsos and limited imaginations. As a result, those few souls who‘ve seen the Earth as a whole have a hard time explaining just what that infinite view made them feel. And they’re not getting any younger - which is what makes this book a public service. For when these space visitors do shirk their mortal coil, who will be around to prove that One Small Step didn’t go down on a Hollywood soundstage? Don’t bother answering; just know that you won’t find a better encapsulation of the Apollo Mission‘s heady success and subsequent ugly death than this book. Equal parts space travelogue, celebrity memoir and character study, Moondust tells the unlikely story of the lucky few who traveled all the way to that rock in the sky, then came back to spend the rest of their days living in it shadow.