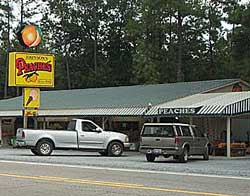 I'd barely stepped foot in the newsroom when someone glanced at me and uttered the P-word. I didn't fight it. I just crawled back into my mobile cocoon, popped in a favorite CD and kicked it to Biscoe. Actually, I drove w-a-y past that highway hamlet, coming damn near Candor before finding the sort of emporium I was looking for. Johnson's: a roadside oasis boasting cold ice cream, sweet people and super fruit. It was there I gorged for a full forty minutes, filling my lens with plenty of Prunus persica before striking out for the orchard that bore those glorious orbs. That's where things got sticky. See, what used to be silent laminate wedged between the seats is now a smug touchscreen insisting I ignore the new by-pass and twelve miles of clogged logging road instead... Okay, I got a little lost, but I'm tellin' ya, that smarmy bitch inside my GPS don't know squat about Montgomery County! That - or I got distracted by that peach cobbler ice cream concoction I juggled over the wheel ... Turbulence or not, THAT thing was righteous!

Anyway, by the time I barrelled into the orchard I was fat, dumb and unhappy to be late so I sprayed the place while shouting questions the man who ran the place, a nice old chap with hearing aids in both ears. I tried to smile a lot to let him know I wasn't dangerous, but he had to wonder why the rumpled TV man with sherbet on his chin was in such a gol'durn' hurry. (Sorry, Pops, I'll take the whole tour later.) When finally I did roll up on El Ocho, I was saddle-sore and still swatting fruit flies, but I had to finish the task! Sooo, I locked myself in an edit bay, sliceed out a few soundbites and clumped a fee cliches around them. Soon after I popped out of my bay to find Bob Buckley wandering by. With little more than a "How do you do?", I jammed my new words into his hand and pushed him into an audio booth. The next fifty minutes I spent hunched over a candy-colored keyboard, watching a timeline form at the flick of a sticky fingertip. I'd hoped to go funky with the musical bit, but I barely had enough time to fill in the black...

Still, I sent it to the servers down the hall with no great degree of shame - a good minute and a half before it eventually aired. That's a lifetime in my business and - deadline aside - my finished piece was no great shakes. But as I headed for the door, I couldn't help but feel like a winner anyway. I even noticed a co-worker's raised eyebrow of respect as I brushed by her out the door.

Of course it could have been the chunks of waffle cone stuck in my beard.

Posted by Lenslinger at 5:22 PM No comments:

YOU may be hitting the road this long holiday weekend, but many of my West Coast brethren are spending Independence Day camped outside Neverland. That's right, a full week after the King of Pop assumed room temperature, the Fourth Estate is still feverishly storming his old castle. Lauer scouring the walk-in closets, Larry King hunched over the breakfast nook, Geraldo threatening to blow the dumb-waiter sky high for all the world to see ... is it any wonder the technical set stays outside? That's where you'll find second generation broadcaster and friend of the blog Sean Browning; apparently he's taken to splaying himself on the pavement, where high def histrionics and below the belt speculation appear almost logical at a certain worm-level. Me - I just wonder how many sat trucks are parked outside Karl Malden's old crib...
Posted by Lenslinger at 9:53 PM 3 comments:

As Good As It Got 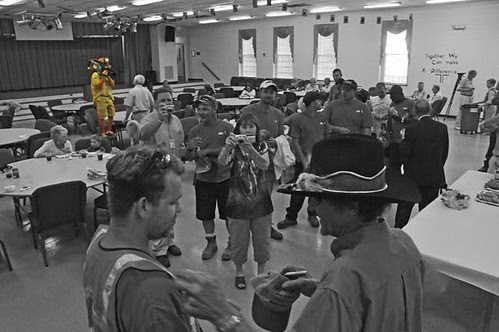 Sure ... I'm standing on a chair in a gymnatorium, pretending to listen to some City Manager while my knees scream in agony, but I'm tellin' ya dude, I'm IN THE ZONE! It may look painful (it was) but this temporary perch above B-Block fodder was the first time I've been comfortable since I got back from vacation. Some people live their whole lives in search of their special purpose. I found mine early. I had a vision while still in my twenties; an ethereal being in flowing robes appeared in the corner of my very first viewfinder and with a glazed look in its eye whispered how I'd spend the rest of my weekdays. I ... would make ... local TV news!

Yeah, I was bummed at first, too - but after a few dozen fat lady dress shops spots and one hell of a hostage stand-off I embraced fresh destiny as only a 23 year old with no other offers can. Cops, Robbers, Crackheads and New Jack Stabbers; I shot 'em all. For the longest time every story I turnedbegan with someone in handcuffs. But a funny thing happened on the way to America's Most Wanted: I showed a penchant for the trenchant. At least that's how I described those epics of unimportance I churned out on my offtime. Let's face it, there are only so many ways you can frame crime-scene bystanders. Give me the underwater wedding, the inmate rodeo, the trash collector appreciation luncheon...

Yeah, the 'the trash collector appreciation luncheon' - but before you give me the same look my boss shot me this morning when I first pitched it, hear me out... We're talking seventy sanitation engineers parking their trucks in a church parking lot and gettin' their grub on. Free stomach juice from a grateful citizenry. Still unimpressed? Did I mention Richard "one of them deals" Petty would be there? Yeah, I know he lives all of twelve miles away, but when the King of NASCAR hobnobs with a room full of garbage men shouldn't at least one fancycam be in attendance? I think so, which is why I chased High Point's Smelliest on their morning run before rendezvousing with them again in a rec room near you....

The moist chunk of television that followed won't bring home any gold-plated eunuchs, but I'm guessing it will stick in the region's throat long after all that crime and grime has washed down the collective gullet. Now help me down, would ya? Dude's on auto-yammer and I can't feel my spleen... 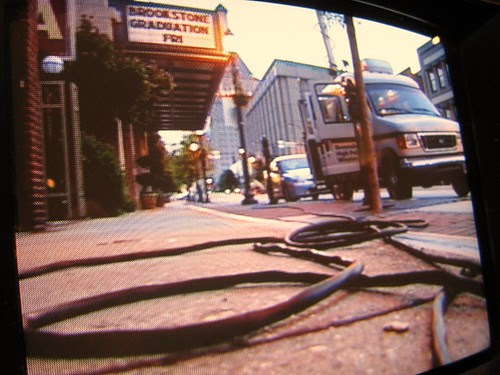 Early morning live shots, they're the forgotten front of local TV news. While most day-siders rarely give them a second thought, the day's first newscast wouldn't be the yak-fest it is today without the reliable remote. Band Camps! Crash Sites! Bake Sales! Body Finds! There's pretty much no place we won't send our perky morning reporters - provided we can reach it with our cables. Cable: it's not something you give a lot of thought to, until you've changed location six times within the same damn day-part. Then and only then do you know the joys of man-humping endless spools of cord up three flights of darkened stairwell - all so the toothpaste model you brought along can glimmer and flirt before a suitably cute backdrop...

Aww, who am I kidding? Morning reporters are decent peeps; hardworking Joes and Janets who can navigate their way through crime tape or silly string - depending on the News Gods' many whims. When I filled in the A.M. shift two weeks ago I was paired with my old Idol ally Shannon Smith, who tolerated my grogginess long enough to get us through five days of morning show grind. Blood Drives! A cooking segment! Ringside at the UniverSOUL circus and some dance studio where a lady danced with candles on her head! You can't score those deep kicks workin' bankers hours! Naah, you gotta wake up confused, dress in the dark, grab the reins of a modern day stagecoach and go to some place pointless. Why just the other dawn I was wrestling heavy spaghetti through a downtown doorway when some guy who slept in his clothes thrust a dollar my way...

I'd have taken it too, had I not been draped head to toe in enough greasy tether to tie down a satellite. Add to that a tropical shirt drenched in flopsweat with a penchant for pejoratives and you have a pretty good idea why no one's asking me to make an on-screen cameo when there are meals being consumed in the Greater Piedmont Googolplex. I'm already the flustered brother Shannon never wanted. Allow me to wander into her screen space and it's a good bet grown men will abandon their breakfast to help rescue the TV sweetheart from the glistening madman who's suddenly invading her space. You know, the one who looks like he just had relations with the Meineke Man's soot-covered loose around the lugnuts cousin. Or worse yet, I could simply track my reporter's every move as she/he totally manhandled a passing drunk.

Don't laugh, it's happened.
Posted by Lenslinger at 6:51 AM No comments: 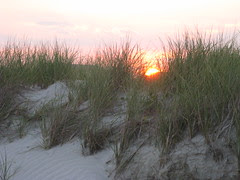 When planning this year's beach week, I was a little worried about my daughters. See, they're 12 and 15. Barbies and buckets just don't cut it anymore, status updates trump story time and iPods have all but replaced juice boxes. In other words, my girls are growing up. This pains me greatly and not because I now live in a house full of women. Understand I grew up almost exclusively with boys; I had but one female cousin and she was smart enough to stay away from my brother and me. No, what little I know about the female adolescent I've learned the hard way; by going back through elementary, middle and now high school while wearing a dress - or more accurately, a Hollister fitted tee. Which is why I was just a wee bit jumpy about taking them back to Sunset. 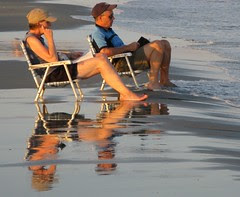 Sunset Beach, that is. Located between Wilmington and Myrtle Beach, this innocuous spit of land is but one of many Carolina ocean towns worth your time, but it just so happens to be my happy place. For almost a decade I've spent the closing days of every June pretending to be a local there. With its (soon to be closed) floating bridge and pristine sand dunes, it's a fantastic place to absorb the shore - unless you're looking for something to do. If so, you'd be better off moseying up or down the coast, for you won't find much miniature golf, dinner theater or museums of the weird around here. There is however, respite for the taking, be it in the form of a surf-side book or a drive to nearby Calabash for seafood so good you'll start talking like there's a parrot on yer shoulder. ARRGH! 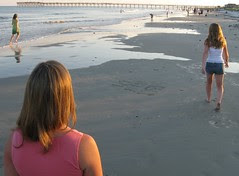 A-hem. Sorry, I promised my daughters I wouldn't use my pirate voice outside and since they were so good last week, I feel obliged to at least keep my eye-patch in my pocket. And by good I mean complacent, for we did little we haven't already done a dozen times. Grill out, sleep in, boogie board and Bocce ball. Ride bikes around the island, shop for trinkets, stare at the horizon and hurl Frisbees back and forth. But no matter how we spent our days, we took in each dusk like it was a Broadway show. My kids used to roll their eyes when I marched them back to the beach for 'the golden hour'. But now I've taken enough pretty pictures of them to make 'em appreciate that dying light and while they'd be reluctant to admit it, I think they dig this quiet island just as much as dear old Dad. Who knows, maybe next year I'll take them to that glittering scab down the road named Myrtle.