The Ballad of Kent and Brenny 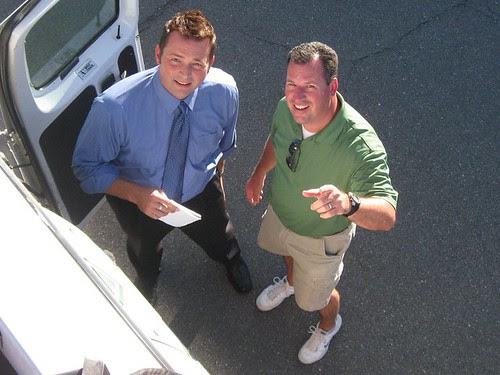 As a guy who just celebrated his 20th wedding anniversary, I can appreciate a good partnership. Which is why I've got such mad respect for those reporter/photog teams that toil side by side, day after day. Take Kenny Cravens and Brent Campbell. For the better part of eleven years, this dynamic duo has covered Winston-Salem and points beyond for the kingdom that is El Ocho. Eleven Years! There are whole nation-states that haven't lasted that long! Even more amazingly, at no time has anyone ever had to pull either of them from the other one's jugular. Me - I get sick of anybody after about three days. Throw in the stress ball that is your average news day and perhaps you'll understand why I've been caught fashioning reporter voodoo dolls out of duct tape and toothpicks on more than one occasion. But this post isn't about my own shortcomings. It's about a seasoned pair of pros who've never let the vagaries of the chase unravel their friendship. Hell, in certain Winston-Salem news circles, 'Brent and Kenny' are considered one person! That is, until now...

See, Kenny's leaving. Soon, he'll pack in his local lens and hightail it back to his beloved Kentucky. There, he'll join his bevy of beauties for a whole new set of adventures and while some of them may involve a fancycam or two, it's safe to say he'll never again be a part of such a celebrated news crew as the Campbell-Cravens Continuum. It's our loss. Since arriving in the better of the Carolinas back in1997, Kenny has maintained a level of professionalism that still eludes your rather lippy lenslinger. While he spent most of his time in the Winston bureau, he played an integral part in our hurricane coverage - which may explain why he's soaking wet in so many of my memories. I also remember standing in a convention center full of American Idol wannabees, staring at my cellphone in disbelief as Kenny's voice told me he wouldn't be joining Shannon and I on our D.C. junket because, well, the satellite truck just stranded him on 1-95. (I thought he was screwin' with me until he didn't show up).

Now it seems Kenny's leaving us for good - just in time to miss our switch to smaller cameras, Final Cut Pro and my eventual mental breakdown at the hands of new technology. But as fragile as I am, we're all a tad worried about reporter Brent Campbell - who'll have to carry on in Winston without his favorite partner. As for Kenny, he'll fare just fine in his home state - though if he ever gets the urge to shoot another hurricane, he'll have to head East and strap on the laptop that will someday replace the sat truck. We'll be glad to make a spot for him - provided he bring some of that Kentucky bourbon to wash down the half-frozen ham-sicle sandwiches that pass for storm coverage cuisine. So good luck, Kenny. Promise us you'll stay in touch with Brent - lest we find him atop the receive tower, staring Westward, pining for his photog and friend. Otherwise, we're sending you a bus ticket...
Posted by Lenslinger at 8:54 PM 4 comments: 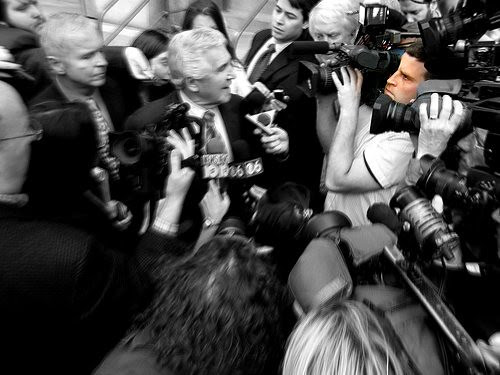 Say what you will about the overheated scrum, but I do some of my best thinkin' while wedged between seven competitors and a fresh felon. As for what's on this guy's mind, I haven't the foggiest, but something about his determined countenance spoke to me long before I drained most of the color from this excellent Matt Ryan photograph. Sooo, without further adieu, allow me to project my own twisted missives on this total stranger's thought bubble in a little segment I call Contents Under Pressure...

5) Three more minutes before my battery dies. If that overly groomed worm from Station X asks this guy one more question, I'm kickin' em both in the nuts.

3) Seven different microphone flags present and I get the radio station's day-glow billboard in my shot. That's gonna cost me a good five minutes to pixelate.

2) I really should be paying close attention to what this dude is saying so I'll know what to tell the web guy when he calls in a minute to grill me -- SQUIRREL!

1) Perhaps that 64 ounce Slushee was a poor choice
Posted by Lenslinger at 9:34 PM No comments: 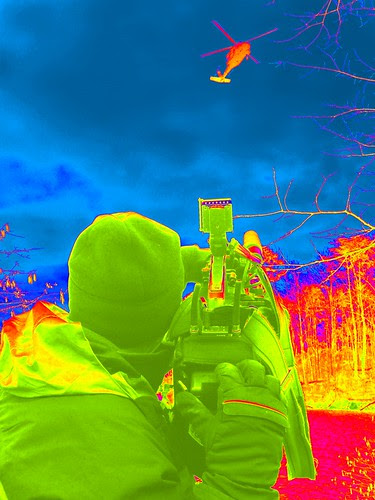 Ever have that dream where you're down on the ground suckin' rotor wash and suddenly the chopper starts dropping frogmen? (You know, the old school Johnny Quest heavies that used to pop up on the back of Race Bannon's boat...) Of course you train your lens on their descent and never even flinch as they peel back their masks to reveal themselves as your least favorite anchor team. Except they're not really an anchor team you've ever known but an amalgamation of dynamic duos from your last eight affiliates. There's Chet and Buffy, Skip and Cassandra, Pinkie and the Brain... At first it makes no sense why they're sporting formal wear under their wet suits, but then you catch sight of a jug band warming up in a nearby swamp and you realize you're pulling another shift on some kind of cosmic telethon.

That's when it gets weird: First Bigfoot comes out for a little soft shoe, followed by a bevy of Budweiser girls who proceed to act out the entire Alec Baldwin intro scene from Glenngarry Glenn Ross with nothing more than Popsicle sticks and their own inherent jigliness. None of it makes a damn bit of sense to you but since you're just standing under a camera it doesn't have to. Besides, there's a disembodied voice on your headphones telling dick jokes and you're pretty sure you'll be quizzed on them the next time you hit the break room after the noon news. For now though all you can do is roll with it, though somewhere in the shallow end of your eyepiece you're beginning to suspect you're dreaming.

It doesn't really matter though, 'cause before you can do anything about it you're swooped up by a chain-smoking assignment editor who gruffly informs you he's the Ghost of Ribbon Cuttings Missed. From there, you're soaring over the Heartland or Silver Valley or Flannel Crescent or whatever the hell your station insist you call your town. It's a bit disconcerting even for a dream, but before you can identify the exact gravy stain on your Assignment Ghost's tie, it breaks away under your grasp and you're falling, falling, falling... By now you're wishing the damn trip would end but just before you crash to the surface a parachute pops out of the fanny pack you didn't know you were wearing and you float harmlessly downward until you land in the middle of a giant satellite dish.

There, you lay in the lack of shade and twitch a while what's left of your frontal lobe searches for meaning and nuance to the disjointed misadventure you now find yourself trapped in. You're about to piece it all together when a distant siren sends a jolt through your frame and the scanner junkie that lives inside you rises up from the ashes of that lasagna you ate before bedtime and you find yourself staring at the biggest smoke plume you've ever seen. That's when you realize the damn thing is wrapped in yellow crime tape and even though you're now schlepping sixty pounds of prehistoric recording gear you realize the only sensible thing is to climb this intoxicating tower of police tape and smoke. All goes well for the first few feet but when your foot gets caught in the coils of video cable hanging off your battery belt you lose your sweaty grip and once again you're falling, sinking into the abyss of a delusion you just KNOW you wouldn't be having if you'd tried a little harder in school and maybe got a real job...

You ever have THAT dream? Or is it just me?
Posted by Lenslinger at 7:36 PM 1 comment: