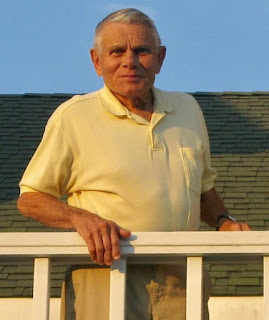 Garlon Pittman was well into his thirties when he met the love of his life. The confirmed bachelor soon married Brenda and, without hesitation, gave her two young sons his last name. How his life must have changed. Richard and I were budding hellions and by the time a third son, Joseph, came along, Garlon's days were no longer his own.

He never seemed to mind though, guiding his noisy new brood with a firm hand and a wisdom beyond his words. Way back in the 70's, when he knew Richard and I were saving money to buy sleeping bags, he told us to look in his car for a couple of bucks we could have. What we found there were two brand new sleeping bags. It sounds trivial, but to my brother and me, those sleeping bags were launching pads for our imagination, portals to adventure. Garlon understood this, and it remained unclear who took more pleasure from the purchase: us or him.

For more than 35 years Garlon worked for Sears Roebuck as an appliance repairman. Dishwashers, refrigerators, washers and dryers - he could fix em all. I know this because people from all over Saulston would call him asking fo help on their homemade repairs. I have many memories of him cradling the phone while we ate dinner. You see that white wire, he would say, clip it and attach it to slot B... no not the red wire, the white one. Trouble was, he knew his appliances too well. He’d have that thing fixed and be off the phone before I could finish raking my butter beans into a napkin.

Garlon believed in the value of hard work and he taught his boys to appreciate it too. We shucked corn, dug potatoes and raked acres of pine straw. I used to swear we had the cleanest ditches in town, because he was always handing me a garden hoe and telling me to go clean out that back ditch. He instilled in his sons a work ethic that benefits us to this very day.

In the army, Garlon was diagnosed with osteo-arthritis. It would plague him the rest of life, making it painful to move and sometimes impossible to sleep. He suffered mostly in silence. In the early 80’s, alcohol nearly got the best of him. So he went to rehab - long before it was fashionable  - and beat that demon. He came home thicker, quicker and more involved in our lives than ever before.

He and my mother remained married for nearly fifty years. In that time, he herded three unruly punks through adolescence and into full adulthood. Eventually, each son repaid the favor with a gaggle of grandchildren who adored him. I can’t tell you how much fun it was watching the man who once towered over me with a garden hoe sit somewhere low and play with his grand-kids. As the number of grandkids grew, Garlon Pittman grew ever more benevolent, delighting in the family around him and treating Brenda like the blessing she is.

When Garlon passed away Monday, it brought to an end seven years of living with Alzheimer's. It was tough watching him go through that. Our only solace was knowing that Garlon, or as we knew him, Dad, understood just how much he meant to us. He knew because we told him. What went unexpressed was the way in which he somehow made three very different boys grow up to be better men.

Just like him.
Posted by Lenslinger at 2:31 PM 9 comments: