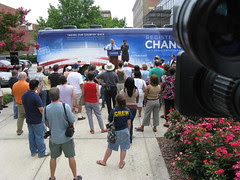 I was up to my elbows in half-crafted passages when the edit bay door slid open. "Can you break away long enough to shoot Howard Dean?" I glanced up and gave the shadow hanging over me a sour look. "Won't that get me in trouble?" The shadow shrugged and moved on, leaving me to collapse timelines and gather my discs. Forty-five minutes later I was perched on a camera platform at Governmental Plaza, the sun beating down on my thinning hair as I twisted knobs on the mult-box at my feet. Through my headphones, a party-approved U2 anthem warbled and blared. I was just about to join Bono in the chorus when a garish tour bus rolled up and spared the crowd from my soaring falsetto. 'Their loss,' I thought as I hopped off the riser to join my competitors at the curb. The mob of supporters cheered as the bus rolled to a stop as my fancycam and I wove a thread through their excitement. Many of them wielded their own recorders of course, including one that captured the curbside cluster in question. That's me, pausing to reflect at 0:34 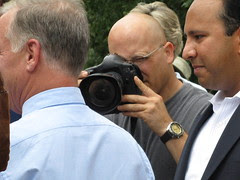 I only wish the phantom camera has continued to roll, for once thed Chairman of the DNC got off the bus, the real action began. Okay, so it wasn't exactly talent show pandemonium, but there was enough paint-tradin' to keep it interesting. Truth is, the biggest barrier between me and my bounty at these events isn't the guy with the Sony on his shoulder and station logo on his tit. It's the housewife with the handy-cam, the college kid with the digital SLR, the tax attorney with the magic Blackberry. Hey, I'm all for citizen journalism (really!), but if you're going to wander into the scrum, could you at least observe some protocol? I can backpedal down a spiral staircase with three other guys I don't even like and still not spark fisticuffs. Can the cat lady with crochet-covered camera-phone please dig her elbows out of my spleen? I got a family to feed! 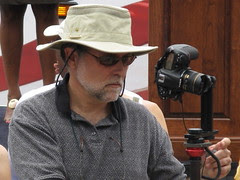 Anyway, when the former Presidential candidate finally took the stage I untangled myself from the weaponized electorate and slunk back my spot on the camera platform. There I joined my colleagues for a little tripod catnap, a time-honored tradition among the photog nation. It's not that I don't pay attention, but pointing a camera at a talking head ain't exactly laser eye surgery. I for one can concoct whole operas in my head while still catching every cliche in living color. In fact, the only thing that would have pulled me out of my trance was a repeat of the screech that ended this physician''s presidential hopes in the first place. That didn't happen of course, though Dean did draw a laugh when he began listing states - only to stop himself, lest he make that gay cowboy sound again. When he didn't I looked around and saw Tom Lassiter, slowly rotating. Figuring he was making another one of his 360 degree masterpieces, I struck the appropriate pose.

That's me, in the middle of the riser, pretending to be awake.
Posted by Lenslinger at 8:23 PM 2 comments: 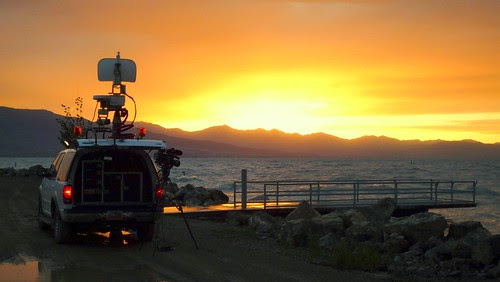 He calls himself NewsRover, but if every live shot the young photog does is this breathtaking, I'd chuck the cell phone in the lake and set a spell. What better way to savor the dusk than to let it make you miss slot? 'Slot', that's teeveese for deadline. Daniel Kovach was moments away from making his deadline one day last month when he snapped this ephemeral vista of Utah Lake. I'm not sure what he was aiming for, but he came away with the closing shot of that old John Hughes movie. You know- the one where young Matthew Broderick stars as that shy and wistful lenslinger; the one that ends with him and that goth-chick from 'Heathers' rolling around on the grassy knoll as a comical ringtone cries out from salty bottom? No? Hmmm, that's weird; they use to play it all the time on HBO. Anyhoo, I'm way off course, so I'm just gonna grab my stuff and go... Anybody seen my gypsy leathers?
Posted by Lenslinger at 6:17 PM 2 comments:

George of the Jungle 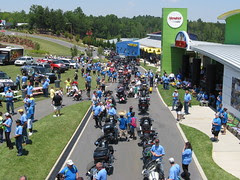 There was much to take in last Wednesday at Victory Junction Gang Camp: a phalanx of glittering motor-sickles, their well-heeled riders and lots of chronically ill children and their grateful families. I moved through the pack, happy to be on the hunt. Then again, it's impossible to be in a lousy mood on this particular patch of Randolph County. In 1999, the first family of Nascar turned 72 of their rolling acres into a place where sicks kids from near and far can come to forget their troubles. It's a powerful place and I check my crusty facade at the front gate every time I go there. Looking around, you get the feeling other folks do too. But I wasn't there to people-watch. Or maybe I was. With Kyle Petty and a couple hundred other generous souls making their annual charity ride pit stop, it was my job to record some famous faces. 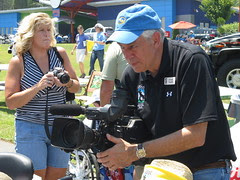 Trouble was, I didn't know who those famous faces might belong to. Sure, there was Kyle himself. I found him first, surrounded by young admirers - some of whom even knew he drove a race car. A few feet away, I found his Dad. Richard Petty is, of course, an deity of sorts around here. He's the only man I call 'King' to his face and mean it. Swamped by fans, he never acknowledged my lens but he did allow me a few other photogs to stand under the shadow of his ubiquitous cowboy hat. After that, I was on my own. For a moment I thought I spotted Tony Stewart signing autographs - only to realize it was some other stocky white guy in ballcap and perma-stubble. Dejected, I turned around to see a giant smiling black man chatting up his own fans. Not knowing who he was, I shot video of him anyway. A few minutes later someone told me it was Herschel Walker. 'Who's Herschel Walker?', I almost asked, but decided to keep my mouth shut and man-card intact. A few minutes later, I noticed a couple other lenses pointed at a rather normal looking lady. I joined them of course, unaware the woman was supermodel Nikki Taylor. Funny, I didn't see any cape.... 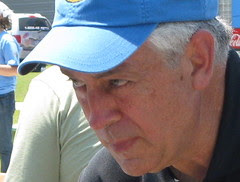 But of all the well-known countenances I encountered last Wednesday, only one prompted me to dig out my digital and pop off a few frames ... this guy - George Vaughn. A fabled photog here in the Piedmont, George was gathering newscasts back when I was playing with my Evel Knievel action figure. Long before I became a lenslinging fixture at the North Carolina Zoo, he and Rod Hackney were profiling its many exhibits and winning awards doing it. Along with a few other elder statesmen of the local news scene, George recorded decades of stilted reality under the dynasty of The Deuce. And of course, he was there. But as we've learned, years of exemplary service aren't enough to earn a lenser any tenure in this business and a few years back, George left the logo'd life. Now. however. he's back in the viewfinder, using his powers for good instead of evil and, once again, winning awards in the process. This alone brings me great joy, for it's awfully hard to age gracefully behind the lens. But watching George case the joint the other day, I reallized, it's not impossible.
Posted by Lenslinger at 10:20 PM 1 comment:

Proving local TV News is going to get a whole lot worse before it gets better, a Las Vegas station has stooped to product placement. That’s right, those are two (fake!) McDonalds’s iced coffees flanking the plastic broadcasters of KVVU’s morning show. Station suits call the unprecedented move a “nontraditional revenue source"; most everyone else calls it blasphemy on ice. Okay, so that’s my own name for it, but what else do you call the steady erosion of your chosen field? The station’s management do their best to dodge the desecration of this formerly sacred space by pointing out that the anchors never acknowledge the vile vessels and besides - they’re only placed there after seven A.M. , when the newscast switches from the morning’s top stories to lifestyle and entertainment fare. Well now - that changes everything…..

Or does it? Ever since the Camel News Caravan rode off into the sunset, newscast producers have done a pretty fair job of separating content from corporate cash-cows. Now however, all bets are off. Many affiliates are strapped for cash; advertising is down and the internet continues to siphon relevancy from a medium that used to be the only platform of record in town. Is it any wonder the chiselers have shamelessly sold their station’s credibility to the highest bidder? No, but it’s a damn shame - because for every lecherous sales executive and grinning presenter, there are vast armies of broadcast journalists who still consider the news a higher calling than the bottom line. I count myself among that number and look forward to the day when I can inform the masses without worrying about the on-air talent wearing face-paint and red, floppy shoes.

Now please, drive ’round to the second window...
Posted by Lenslinger at 11:35 PM 5 comments: 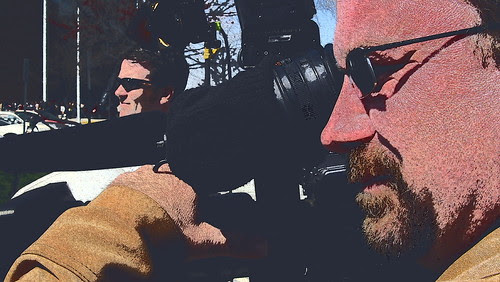 Sure, I'm pretty two dimensional - but I haven't morphed into a cartoon superhero just yet (though my wife does swear there's a giant "L" on my forehead). I'm just busy, that's all! After a couple weeks of mixing it up with various reporters, I've been granted a slight reprieve by way of the non-linear timeline. Yes, all those big-wig profiles and scary factory tours have stacked up, forcing me to pass up the sweltering crush of Southern humidity for the icy confines of an air conditioned edit suite. SWEET! Don't get me wrong: I still love the magic of the grab, but when the very air feels like wet Play-Doh, I'm ALL for locking myself in a dark, dank box and pretending to be at least semiconscious (You forget I learned how to sleep with my eyes open in the Navy).

The only problem is, extended periods of time hunched over a candy-colored keyboard don't make for very good anecdotes. Sure, there was that exciting post-lunch rudh where I vacillated between close-ups of the Nyquil bottles zipping by and the wide shot of Chad Tucker adjusting his hairnet - but that kind of excitement's hard to portray unless you were actually there. Anyhoo, my shooting sabbatical will soon come to a halt - as I'm running out of series pieces to slice and the assignment guy is doing slow donuts just outside my door. Why, in no time I'll be dripping in flopsweat as someone with much better hair waits inside the car for me to finish shooting that empty building. It's a living - and at times, a damned interesting one. Bear with me as I try to transfer some of that intrigue here. Otherwise, I'm dropping this whole pixel act and turn to scrapbooking, which - as far as I can tell - is basically blogging with Scotch Tape.
Posted by Lenslinger at 9:28 PM 1 comment: