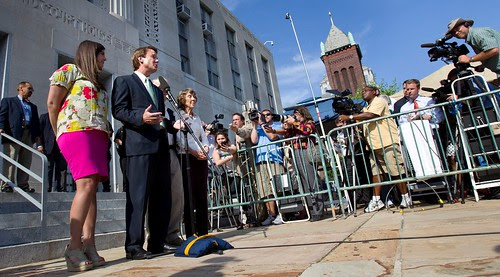 Well, America, it looks like our long national nightmare is finally over. The John Edwards jury reached a verdict. Sort of. They found the former Presidential candidate Not Guilty on one charge of campaign finance fraud and they deadlocked on the rest. It was a fitting end to a seriously weird ordeal. For me though, the John Edwards trial was less about the legal wranglings that went on inside the courthouse and more about the shenanigans that played out on the sun-baked steps. For that's where I spent the better part of seven weeks: waiting, laughing, occasionally losing consciousness.

It would have been singularly miserable were it not for the misfits that joined me there, a ragtag group of journalists who traveled a lot farther than I did to watch what passes for justice dribble out of that courthouse door. It was an experience I will never forget, no matter how much I pay for therapy in the coming years. Few hurricanes I've covered have left me as exhausted, sore or uncomfortably numb. You might say I'm glad it's over. And while I won't particularly miss taking Market Street by force every morning, I will miss the friendships I formed there.

Funny how the world works. A philandering millionaire bangs a videographer and a hundred other camera nerds make new friends as a result. I don't know if that's quite what you call 'the butterfly effect', but it's exactly what happened here. And while this probably wasn't the snark you dropped by for, right now, it's all I got. If you really want to know what's in my head, just take a look at my new pal Chuck Liddy, who found a way to express how every journalist who covered the John Edwards trial is now feeling... 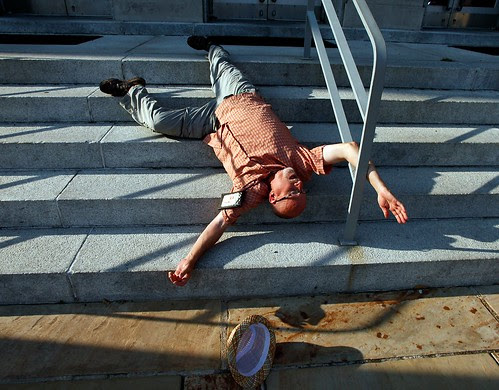 (Top photo by Jerry Wolford. Bottom photo by ...Chuck Liddy?)
Posted by Lenslinger at 6:06 AM 4 comments: 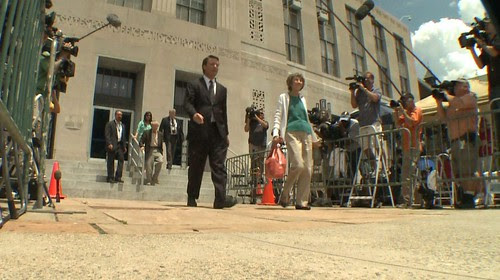 I can no longer tell you how many times I've shot John Edwards as he left and entered court, just that  I fully expect him to be shuffling his elderly parents through the back-alleys of my brain for... oh, the next thirty years. That's how it works, see. Squint through the glint of current events and you're gonna get few shards of history in your mind's eye. If you're not careful, it can get infected and the next thing you know you're lying awake one night soaked in sweat as the last two decades of defendants, damsels and dogs in funny hats dance across your darkened ceiling. It's enough to make one request a roofie. But enough about my night-sweats, let's meet the players! 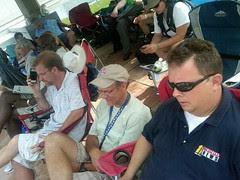 It's ... the same gang of drifters and layabouts I been smellin' for six weeks now. Ya know, it's pictures like this that do my breed a disservice, for it tends to convince our station-bound bosses that we lenslingers are locked in some sort of mortal lounge-off in which the photog with the most bloated expense report wins dinner for six at the high-end bistro of his liking. No charge. (Don't ask), just know that for every time you see of us sitting down, a homeless guy takes a dump behind our live trucks. I won't say it's happened, but if you see a guy who with 'Flawless' tattooed on his lip eyeing a patch of pavement anywhere near your mobile newsroom, know your little weather garden is about to get fertilized. And if you catch him in the act, wait 'til he's done. Otherwise he gets all pissy about the tip. Forget I mentioned it. In fact, let go off all that unwanted knowledge: things like your computer password at work or what level of the parking deck you left your news car double-parked in. You won't need any of that once you summit your own personal step-ladder and peer into the abyss. Just don't look for too long... 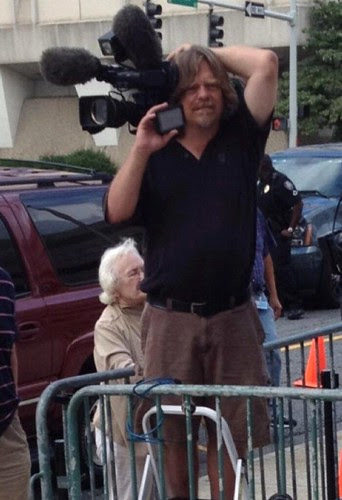 Or something like this could happen to you. We'll call him 'Richard'. Rumor has it he's some kind of hot-shot from out of town. He seems to have a lot of toys and they say has just as many trophies at home, but from what I can tell he's a nervous shell of the fellow who first appeared here a month and a half back. Dude used to have opinions about EVERYthing, but lately he just fixates on the middle distance and tries to call in airstrikes with an iPhone that hasn't seen the business end of a charger in nine days. I figure when it's all said and done, we'll pick his pockets and point him towards Capital City before abandoning him altogether. Someday he'll thank us, provided he regains the ability to speak in anything other than satellite coordinates. Until then, your better off avoiding this once coherent cameraman altogether. That, or hit him with a lawn dart and be done with it. Now this: