Just when I think Amanda Emily has unearthed every early broadcast photo of note, she excavates another frame for the ages. Her latest discovery deserves to hang in some hallowed hallway of The Lenslinger Institute, or at the very least printed on the kind of postcards one finds at one's seedier t-shirt shops. Either way, it's a safe bet the story behind this image is a lot more interesting than whatever Sexy Robot Fairy Wars (in 3-D!) Hollywood is cookin' up. 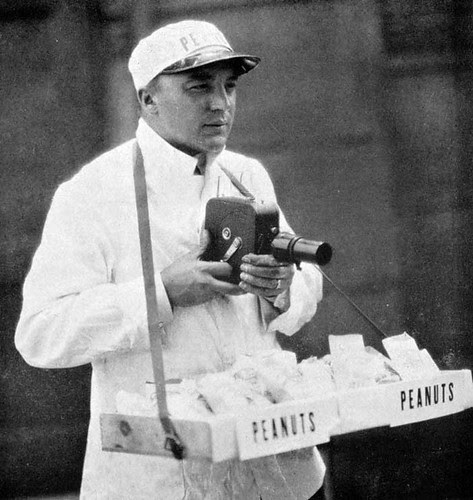 From Feeding the News Beast...

At the Jack Dempsey vs. Tommy Gibbons world championship heavyweight fight at Shelby Montana on July 4, 1923, newsreel cameraman were not permitted to shoot footage of the fight. Henry Hardy, disguised as a peanut vendor, shot footage on a hand cranked camera he smuggled in. He got the pictures of the fight and came back to the office somewhat of a hero among his peers.
Posted by Lenslinger at 6:43 AM 1 comment: 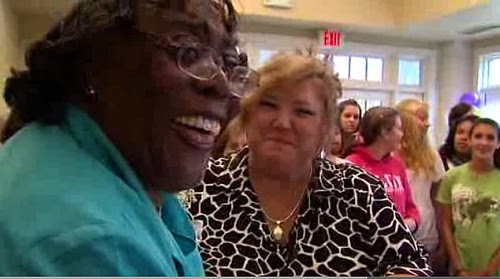 Ever bum-rush a lunch lady in the name of news? I have and I sleep fine at night. But before you brain me with that cafeteria tray, understand this: I got mad respect for matriarchs, moms and even the occasional maven. So when I say I bum-rushed a lunch lady, please know I did nothing of the sort. Sure, I cornered Miss Shirley, hooked a microphone on her without really asking and told her I wasn't going to leave until she talked to my lens. But I did it with a smile! And wouldn't you know she softened a bit, relaxing just a fraction and uttering something humble. I smiled and nodded, despite the fact I couldn't hear a single word. The sun room was packed, you see, teeming with administrators, kitchen help and more than one millionaire's daughter. Between all the well wishes and privileged giggles, I couldn't hear myself stink, let alone hear how Miss Shirley was fending off my inquisition. That's when she started to cry. The mic I'd attached to her polyester lapel picked up her every syllable, but sixteen inches away, her words were lost in the adolescent din. So I nodded again, while silently praying I wasn't standing on her foot.

But I'm getting ahead of myself.

An hour or so earlier, I pulled up to the fancy girls' boarding school, a cameraman on a mission. Seems a certain cafeteria worker had spent half a century doling out cakes, pies and wisdom to upscale offspring from around the globe. Miss Shirley's many friends were excited about her sesquicentennial and had conspired to honor her with a small ceremony - whether she liked it or not. that's where I come in - a pre-seasoned 'slinger eager to pay his station's respects. Trouble was, Miss Shirley was famously averse to hoopla. I was repeatedly warned any attempts on my part to pay homage would be met with stiff indifference - if not a highly-polished frying pan upside the head Sooo, while she mingled with her peeps in an inner room, I did my best to blend in with the lunch crowd. It was there, among the dinner trays and debutantes, that I planted my tripod. I gotta say though, standing there amid a sea of screeching fresh(wo)men, I felt a little less than invisible

Maybe it was the hula shirt.

Or maybe it wasn't, for once friends coerced Miss Shirley into the sun-room, I melted into the backdrop, determined to fill my destiny as fly on the wall. It wasn’t easy, as the moment the lunch lady in question spotted the newspaper photographer huddling in a corner, she froze. She stared, she grimaced she even attempted a little evil eye as her many admirers urged he to let loose with a few of those stories she was famous for. She did not. What can I say - some folk view a cameraman pointed their way as an otherworldly specter that should be examined only out of the corner of the eye. This makes it tough to document unencumbered, but when a hews shooter’s lunch is on the line he (or she) will do just about anything to get through the shoot. Thus, I didn’t really worry, as nothing short of Sharia Law was going to stop me from interviewing Miss Shirley. Actually, I’d won the match long before I cornered her with questions. Ten minutes in, the crowd convinced her to cut the cake. She did so and broke out in the first of her fleeting smiles. As she turned her head, she barely noticed the pesky news fella right there, or the fact that he too was finally smiling.

Kinda makes me feel bad I made her cry.

If you're looking for a place to major in cameramanthropology, you'll do no better than your local water park. There you'll thrill to the splendor of a thousand double-takes, spark panic in the hearts of housewives and emit a contrail of eleven year olds. It's a target-rich environment, but if you're not careful, YOU could become the hunted. Don't know what I mean? Apparently, you've never slogged through a county fair with a lights and logo on your shoulder. Or plowed into a tailgating party with your number two sports guy trailing close behind. I have and can tell you with great sincerity that few arena parking lots compare with your average water-slide emporium, a modern day Colossus with a milieu somewhere between moonshine bust and American Idol audition. Trust me, I been to both. And while no one threw corn liquor in my face or insisted on singing Streisand, I can assure you, it was a grueling experience.

Okay, so it wasn't exactly the Bataan Death March. But my sixty minute slog through concrete and Dippin' Dots packed its own kind of casualties. Namely, the collective dignity of the human race. Falling bodies, hairy uncles, turbo wedgies: for the fully-loaded photog, it's a sea of possibilities. Why if you can't stroll through such as place and this and fill your tape or disc or card with memorable images, well then, you might want to remove that lens cap. And while you're at it, take the following advice from your Uncle Lenslinger, patron saint of distracted glass masters...

Keep Moving - Though many in the crowd will try to hide from your lens, a fair contingency will pivot on your every move. Bear this in mind when backing up, lest you crush a phalanx of frothing fifth graders - who’ve been flashing made-up gang signs at you and your tripod ever since you two entered the place.

Wear Your Game Face - Ask any of those %$@#& I work with, I’m an expressive, loving person. But in unruly crowds as this, I’ll not hesitate to go total robot. No emotion, eyes darting, little whooshing noise when I walk. How else are you supposed to survive when your only eye protection is a thousand yard stare?

Do No Harm - Mere happenstance determines where we take our lens. Don’t make others pay the price. See those bendy straws sticking out of the kiddie pool? Those are the life support systems of three stay at home Moms who didn’t count on a cameraman when they put on that swimsuit that used to fit. Move along - they’re almost out of air.

Eyes OFF the Prize - It’s a water park and you are human. Whether busty coeds or chiseled frat pukes trip you trigger, do NOT indulge in any eyeball reconnaissance. You are, after all, carrying an oversized recording device with incredible zooming capability into a sea of scantily clad citizens. Don’t be that guy. The world’s got enough of that guy.

Bite Your Tongue - People don’t see you. They see that logo. Thus, now may not be the time to use those zingers you heard on the Comedy Central roast. You will be tempted. In fact, the lower back tattoos, butt-encrusted Speedos and occasional pair of black socks will virtually demand your clever commentary. Do not - I repeat, Do NOT indulge in any --- excuse me, won’t you?

“YO MISS - in the rebel flag bikini and strawberry blond dreadlocks - Has Bill Cosby gotta come back in town and choke a bitch!?!”