Schmuck Alert: Sight of the Gun

TV News: the only profession where you place yourself in volatile situations, then wheeze like a banshee when trouble erupts. That said, there is ABSOLUTELY no excuse for pulling a gun you don't plan to use, let alone menacing a news crew with it. But there's no denying that's exactly what happened in Joiner, Arkansas the other day, thanks to the magic of video...


"Excuse me, Cameraman? Yes, you - the one I'm threatening with bodily harm and a firearm... you're not recording this, are you? 'Cause if you're, I'd be be pretty thick to keep whipping out my piece like this. Maybe I'll just hold it by my side and walk away like I have to pee. You keep rolling while your lady friend goes all Isiah Carey up in this joint..."

Okay, so it's easy to poke fun, but if someone pulled a heater on ME, whatever audio that followed would be so draped in profanity, Ozzy Osbourne's kids would file a complaint with the FCC. Truth is, reporter April Thompson and photographer Ben Short did a lot of things correctly when an angry young man pulled up and broke out his best Boomhauer. Thompson remained chill and got out of the camera's way, Short kept rolling and centered his lens on their surprise guest. It was all rather textbook until Dude smacks the camera, then runs back to his pick-up for more than a little ordnance. At that point, mere hindrance turned criminal.

Critics can fault WREG for pimping the incident out of proportion and they may have a point, but the fact remains that jack-ass brandished a weapon in front of an innocent news crew and no matter the showboating that followed, that shit ain't cool. So ease up on the Monday morning quarterbacking, fellow media members! I've seen a few of you soil your action slacks whenever a bug flies into the car. Who knows what dialect you may affect once somebody pulls a hand-cannon on you! Me - I'd reach for a word understandable in any language...


(By the way, the subtitle of this particular Schmuck Alert is a lame attempt to salute David Carr's The Night of the Gun, quite possibly the finest junkie memoir you'd ever want to read. A Lenslinger Library Favorite!)
Posted by Lenslinger at 9:45 PM 2 comments: 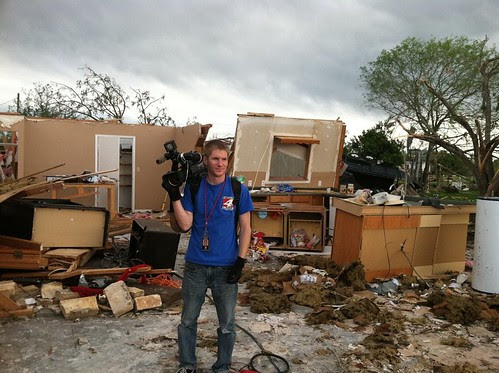 When young Stephen Clapper left El Ocho for his beloved Texas, we just knew he would do well. But from the looks of it, he's rippin' the lid off the joint! Okay, so that was lame and not the least bit funny. But neither is Mother Nature when she decides to put her foot down on an innocent village. That appears to be what happened here as Clapper explains:


We had a couple tornadoes touch down in a couple small towns just south of San Antonio. This was probably the worst damaged home. We did a bunch of live shots from where I'm standing. The Weather Channel was on the other side of the house.

Ahh, The Weather Channel. Ya know, your mother-in-law's favorite station is a beast on the scene of a natural disaster. I know it's their bread and butter, but a little less self-importance would go a l-o-o-o-n-g way when dealing with people who can put their home in a wheelbarrow. But since I didn't log in to talk about that, I'll move on... Just keep Cantore away from me, would ya? HE knows why...

Now, where was I? Oh yeah, Stephen Clapper, the prodigal photog. Dude left us many months back and I for one miss him. Not only was he professional beyond his years and totally chill, he's a talented musician! More importantly, he was a grown-ass man. Wish I could say the same for every young photog I know. They'd be wise to emulate Stephen, though with a last name like 'Clapper', we never, ever, ever called him Stephen.

Now, back to the debris field. Of all the twisted vistas we third responders show up at, nothing sticks with you like a broken home. Then again, if you can traipse through a pile of scrap that used to be someone's home and NOT come away with permanent mental images that will never leave you, you are one stone cold news shooter with an eroded soul. Most of us can cite chapter and verse the times we've shown up to find some neighborhood missing in action. Me, I could write whole books on just the demolished trailer parks I've toured.

But as Amanda Emily points out, I probably never will.
Posted by Lenslinger at 10:36 PM 1 comment:

Riveters to the Spot 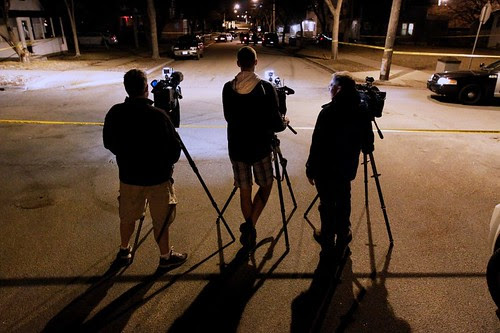 Ever have that dream where you explore some murky world? Maybe it starts out at the office all normal-like, then suddenly you're alone and driving, confused as to where you're going but determined to beat The Others there... That's when colors swirl and time takes five as what should be a simple devolves into a punishing conundrum of scanner hiss and easily missed alleyways. It's only then your eyelids twitch and you begin to think you've been sleeping all along, not lurching headlong into the void at the whim of some fickle, unseen master... Or are you? Suddenly it seems you're where you were trying to get to all along, yet the tempest is spent and all that remains are the fluttering yellow strips of futility. A part of your submerged mind thinks to look around and you're not at all surprised to see there are now three of you staring into the abyss....

Wait a minute! That's no dream! It's just the Night Shift! I know because I've worked about a dozen of them in nearly twenty years. And those who have endured even more evening shifts tell me there's more to it than just beefing up your light kit. There are tighter deadlines, fewer managers around and a steady stream of crime scenes to brighten up your day night. Just a few of the reasons I keep my sunny ass off the clock come dusk. Better to leave it the younger set, like these three fine specimens pictured above (Jared Rose of KMSP, Jeff Ganahl of KSTP and Nate Anderson of KARE)! Together I'm sure those three will get to the bottom of it, whatever it is. Me, I'll be at home not watching my set and feeling bad about that camera battery I scarfed from the night guy..

Or was THAT a dream?
Posted by Lenslinger at 9:11 AM No comments:

Schmuck Alert: Attack of the Hardhat! 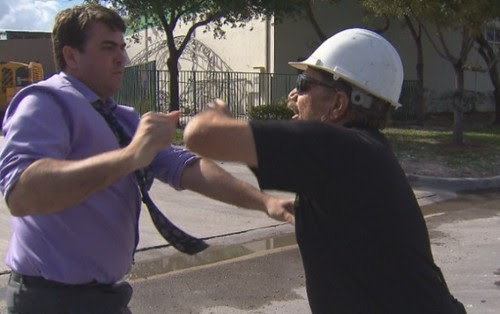 If the list of reporters honored by The Lenslinger Institute was any shorter, we might get around to writing it down. At the moment though, only one name echoes down these hallowed halls: Stormin' Bob Norman. He's the Miami reporter who didn't let a dude in a plastic hat get away with manhandling his partner Mario Alonso. The back-story is a bit dense; something about garbage company contracts. But what's important here is that the journalists were well within their rights when they set up on a public street to shoot video of a recycling plant in Pompano Beach. Enter one furious foreman. "You can't take pictures of the plant!" he barked as Mario trained the camera on him instead. That's when the foreman got all grabby with the glass, prompting reporter Bob Norman to give the smaller man a friendly SHOVE! A tussle ensued, until the apoplectic hardhat scooped up the crew's wireless microphone and stormed off with it, (presumably to launch his own TV network centered around short, angry men in safety gear). This doesn't sit well with our new buddy Bob, who demanded the microphone be returned, then waited calmly while the foreman called 9-1-1.


"Hello, Police? I just attacked an innocent news crew and stole their microphone. Can you come out here and remind me what a bitch move that was?"

Okay so the foreman probably worded it differently but it doesn't really matter because once authorities did arrive, they listened to both sides, watched the video and suggested Mr. Ass-hat return what was never his to begin with. In the end, the foreman even shook hands with the WPLG crew and at last check all seemed rosy in the Sunshine State. Normally, this is where we step in and issue an official Schmuck Alert for crimes against the camera. That we're happy to do (Schmuck!), but it's what Bob Norman did during and after the episode that has this esteemed panel awkwardly trying to high-five itself. Norman didn't have to push the man away, but he did. The investigative reporter explained why in a wry slide show that appeared on his station's website shortly after the incident.

"Mario is completely vulnerable at this moment and the camera itself, which is ridiculously expensive, is also in jeopardy."

"In defense of man and property, I push him back. As you can see his hand is still on the camera."

"I'm thinking, he's short, but he's pretty strong ... and it looks like we're going to go at it. Space is my friend with this little bull."


Norman's station could have saturated the airwaves with looped footage of the whole goofy affair, but for a while they held their fire. The slide show and its more than apt captions drew a few eyeballs without mangling the mission at hand. Norman's eventual piece wisely centered on all that he uncovered and treated the attack of the hardhat as the mere curiosity it was. Well played, Bob Norman. Well played. As for that other guy...

SCHMUCK!
Posted by Lenslinger at 7:57 AM 2 comments: