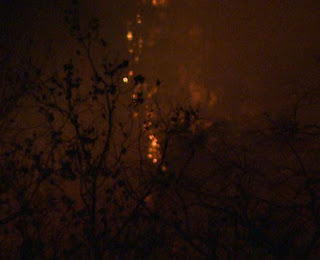 Sooo, you want me to take my aging news hoopty up some burning mountain pass in smoked-out pitch black conditions? Dodge wombats and flatbeds as I push that junker up hairpin turns while my reporter checks her Instagram standings? Barrel my way past a fleet of parked fire trucks perched on what should be called Suicide Ridge until I find a flat patch of grass to park on? Break out my gear and plant my tripod on some crumbling road shoulder in the name of news? Employ my sniper-like ability to knock off shot after iconic shot of smoke plumes, hot spots and cop cars while my reporter waves her heavily logos microphone at the only person around NOT wearing a firefighter helmet?

Be there ready and rolling to catch any soundbites that may pour forth, fingers hovering over zoom button should any real emotion emerge? Scrounge even more sound from whatever official we can find, then get back in the car and force it up five more miles of dark, twisty switchbacks? Steer that bucket of bolts past Lovers’ Leap and Losers' Landing before settling on a suitable view of the burning orange smear on the cliff-face above us? Unpack lights, camera and action as my reporter steps in front of the camera while mumbling to herself? Crank open the iris and tweak the backlight until my reporter is flanked by distant orange smear and a passing sense of urgency? Hit ‘Record’ and ride audio levels as she stylizes a diatribe that will be used to open and close a report we’re still not done shooting?

Pack up my gear, get back in the car and break out a laptop? Dump my fresh footage into a digital timeline before passing laptop to reporter without knocking over the Big Gulps we’ll have bought an hour earlier? Buckle up and try not to drive off a cliff as I navigate one crazy curve after another back down the mountain? Try not to fall into a trance-like state as the reporter beside me zips back and forth through my footage, the sound-bites stopping and starting like some pre-edit hip-hop? Pull over halfway back and switch seats so that I can finish the edit and upload our piece (hopefully) before we get back to the station? Hunch over a jostling laptop and finger-pad my way through a catacomb of click and drag decisions while my reporter drives us into what I can only pray won’t be a herd of news-crew-hating deer?