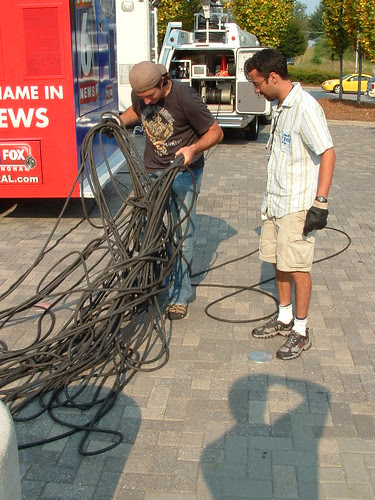 If viewers could see the Herculean hustle, madcap scramble and damn near panic behind your average local TV newscast, they’d watch in greater numbers. I’m convinced of it. What’s more compelling - that static parking lot live shot or the cross-county death race that made it possible in the first place? What would you rather see - a reporter mouthing sixteen words they’d just memorized or tendrils of smoke coming out of an assignment editor’s ears as they realize no one’s around to cover the flipped-over school bus? What would make you drop the remote - a smoothly executed anchor toss or the sound of an assistant news director speaking in tonguest? I’LL take the meltdown every time and so, I believe, will Sally Joe Housecoat.

Now, don’t get me wrong. I don’t think my friends and I are so fascinating that the world will hang on our every loss of bladder control. But I assure you, the little girl noises emitted by a grown man editing under deadline is far more intriguing than any thing the sports goob has to say. And the physical grace of a weatherman gloating over a low pressure system has nothing on a portly photog running desperate circles around a live truck as he searches for the handheld microphone hanging off his belt. Seriously, I’ve watched whole mini-series with less story arc than a pretty reporter arguing with the voices in her earpiece. Then there’s the jittery floor director performing kabuki theater just out of camera range. That shit would be a hit on pay-per-view!

As much as I stand behind the previous two paragraphs, I realize it’s tantamount to treason. Since the very first test pattern appeared in an engineer’s dream, those of us behind the glass have done our damnedest to hide the ugly truth from viewers. Broadcast news is a collaborative effort (and an excellent movie!), a team sport played by unsavory characters with specialized skills and filthy language. Yet what we show viewers is sterilized, contrived and, quite often downright dull. It’s why you can travel this fruity plain and see the same type of glass-eyed mannequins adhering to the same tired tropes - be it Eugene, Oregon or Mobile, Alabama. Originality, it would seem, is simply beyond us. How about we at least practice the kind of transparency we demand from our elected officials.

What’s that? Exposing the great unwashed to the machinations of our craft will destroy television news’ credibility?

THAT live truck has left the lot.
Posted by Lenslinger at 9:45 PM 6 comments: