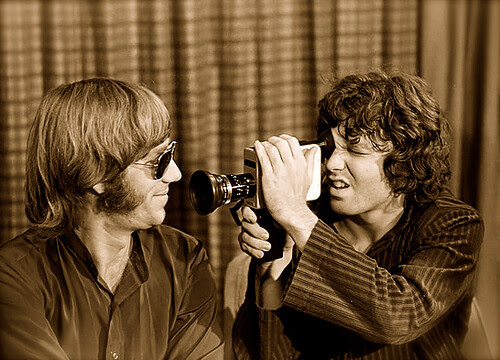 Pay no attention to that dirty hippie making love to his microphone stand... THIS is about the man behind the keyboard.  His name is Ray Manzarek and he is freshly dead. Once upon a time, he co-founded a band by the name of The Doors - a frightening little combo with no bass player and a lead singer dripping with charisma, chaos and quite a few chemicals. “The Lizard King”, he called himself and it got a lot of press. But the musical landscape upon which Morrison trod was largely built by that cat hunched over the Vox Continental.

A contemplative gent with a degree in Economics, Ray Manzarek grew up playing piano before meeting Jim Morrison shortly after completing UCLA Film School. What followed was a collaboration of music and madness, a troubling amalgam of theatrical bedlam and psychedelic sensibilities. Did I mention the music kicked ass? It did, but only in the most unconventional ways. And while Jim with his tortured howl and angelic looks got all the camera time, all ears were tuned in to the kaleidoscope of sound Ray wrenched from those primitive, carnival-like keys.

But Ray did more than provide a musical underpinning for his friend to preen upon. He also kept his lead singer alive. For awhile, anyway. Onstage, Ray, along with Robbie and John, would fill in the gaps between Jim’s natural genius and his drug-fueled delusions. In fact, all three instrumentalists became adept at punctuating their leader’s musical missteps with just the perfect flourish. Credit Ray, whose precision, intellect and deep hippie street cred foiled Morrison’s grimmest proclivities. For far too short a time, they made music: brooding, spooky tunes that had more to do with setting worlds on fire than wanting to hold your hand.

Long after Jim Morrison left this realm, Ray found himself explaining their days away. Verbal, kinetic and usually smoking, Ray Manzarek gave the kind of interviews rock writers dream about. “I played Apollo to his Dionysus!” he’d tell any scribe who’d listen and they’d always nod, not always knowing who Dionysus was.  That’s okay, Ray did. For Manzarek made music with a fallen God and he seemed to know this long before Morrison ascended into legend. Now that Ray has joined him, there’s no telling what those two are up to. One thing’s for sure, though...

It sounds like nothing else you’ve ever heard.
Posted by Lenslinger at 10:46 PM 6 comments:

Sighs of a Lifer 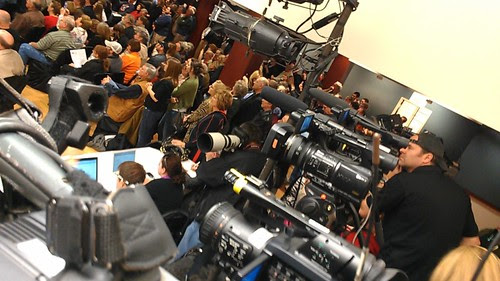 How do you know you're in a room full of veteran photogs?

When the returning soldier pops out of a kindergarten closet, everyone stays on sticks.

Four minutes into the press conference, no one is rolling.

Enough collective battery power to fuel the International Space Station for at least a few parsecs.

Not a microphone flag in sight.

Three of the men present would look quite at home with an eye-patch and shoulder parrot.

Little to no fidgeting,

Free food never consumed on sight. What you smuggle out in cargo pockets is between you and the Lord.

"Black eyes, lifeless. Like a doll's eyes. When he looks at ya, he don't even seem to be livin'. Then he hits that litle button and those black eyes roll over white..."

And the number one sign you're in a room full of veteran photogs?

That oversized folder the PR chick just handed you is suddenly missing.
Posted by Lenslinger at 9:16 PM 3 comments: