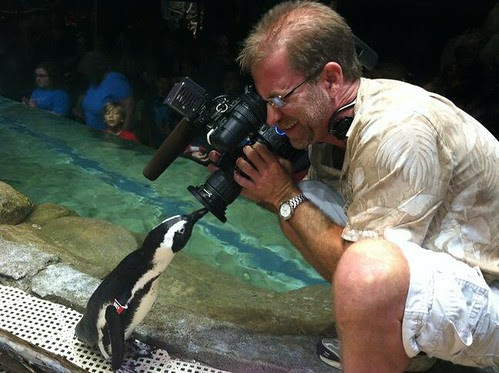 Every once in a while, something unexpected wanders into frame and drains the moat around my soul. It usually happens at soldier homecomings, Special Olympics or certain City Council meetings. Okay, so I'm lying about that last one, but the fact is we TV stevedores ARE occasionally capable of human emotion (like those conflicted cyborgs of Science Fiction, who bring civilization to a grinding halt with their incessant meddling). Lately, I've strained in vain to keep my pathos under wraps. What can I tell ya - parts of my life continue to suck. But since I hold no patent on that predicament, I choose to lose myself within the lens. That I do, puttering around the eye-cup like some creepy lighthouse keeper.

Then along came Brenton.

A seabird of some distinction, Brenton met me at the back door of the Greensboro Science Center's new penguin exhibit. Unlike the rest of her colony, Brenton wasn't as interested in the bucket of fish as she was the cameraman who came with it. I was flattered, if not a little weirded out, at the creature's curiosity. Like a cat, she rubbed against my ankles, then stopped to stare up into my eyes like a homeless Basset Hound. So I returned the favor, twisting the macro ring on my lens until my new girlfriend snapped into focus. Brenton didn't flinch. Instead she met my gaze with deep black eyes that seemed to flicker with wisdom. Chances are she was checking her reflection, but as we stared across the great divide, the glacial malaise of these last six months melted away and for just a moment the present felt better than the past. That's when I heard someone laughing and realized it was me.

Don't worry, though. I'm sure the feeling will pass.
Posted by Lenslinger at 11:14 PM 9 comments:

News crews have it rough. They're overworked, underpaid and labor under a false sense of relevance. All of which makes me very reluctant to ridicule them - even from afar. After all, I'M one of them and when it comes to putting dodgy content on the air, there is blood on my hands as well. But never in my rashest hour have I foisted the kind of foolishness willingly broadcast by certain employees of WJAR-10-NBC in Providence, Rhode Island. Perhaps you've seen it: A young reporter caps off her live shot on a bear attack with a few helpful attempts on how to stave off a similar incident. What followed was an abomination. The reporter (we'll call her Julie Tremmel) cavorts, overacts and generally displays behavior better suited for a game of stoner charades than an actual newscast. While not privy to the logic behind this ill-advised addendum, I do believe I recognize the the sordid core of this report. Sooo, at the risk of sounding like an old fuddy-duddy (I prefer 'curmudgeon') I'd like to offer some unsolicited advice, First, though, some background:

For as long as I have hoisted a lens, local TV stations have done their best to drive themselves out of existence. The sins of the fathers have many. Vacuous ass-hats and admitted degenerates have always gravitated toward our field. Long before early engineers knitted the first color patterns from stolen Indian blankets, folks who couldn't make it in the real world have found solace and acceptance underneath our heavily-logoed tent. This is nothing new. What is new(ish) is our industry's insistence on hearing the cheap, the young and the inexperienced. Major market shops that used to hand pick journeyman staffers now fill their newsrooms with folks barely out of college. Considering the salaries they offer, this only makes sense. But the corner-office crowd has thrown the baby out with the bathwater, replacing exiting veterans with a generation of journalists whose sum life experience comes from binge watching Jersey Shore.

Don't get me wrong. I work with plenty of young reporters who strive for nuance and intelligence in their work. But I know many more whose idea of a sound journalistic skill-set is a stack of glossy head-shots, some far flung agent and a wardrobe they really can't afford. It is these pretenders I'd like next to address...

ATTENTION YOUNG BROADCASTERS: You have dedicated your days to an industry in decline. What used to be considered a vibrant signal of society is now just so much noise. Loyal viewers are dying off by the hearse-load and they're not being replaced. Your Mother may be impressed at seeing little her baby on the tee-vee, but the rest of the nation considers your ilk somewhere between tax collector and pedophile. By no means is this your fault. Generations of buffoons before have long ago paved this road to irrelevance with ego, affectation and hard hitting reports on how this washcloth could kill you(!). But while you're not totally responsible for broadcasting's prolonged demise, you did willingly jump aboard this listing ship. If you have any hope of treading water, let alone lap your competition, you must remember this:

Credibility is key. People at home and on the street already assume you're a preening idiot. Most many of you are not. If you plan to stay employed, or at the very least parlay your regional fame into a sweet P.R. gig, you must bleed validity. You must project (and protect) personal integrity with the zealotry of an suicide bomber. Sure, acting foolish on the air may land you on Letterman's couch, but it probably won't land your insipid mug on any hometown billboards. Wanna go viral? Skip the condom next time you hook up with some drunken Millennial. Otherwise you're best hope of becoming a web sensation lies in the people you interview. Let some hapless sap or idling baby-mama turn soundbites into passing catch-phrases. Your job is to play the straight man (or woman). Wanna perpetrate something stupid to ping-pong around the internet?

Ain't nobody got time for that.
Posted by Lenslinger at 8:25 PM 6 comments: