Attack of the Mad Men

Proving that news photogs can do more than clamor at crime tape, a couple of senior 'slingers have tapped their inner auteur, in hopes of promoting b-roll.net. It all began when the founder of that invaluable site sounded the clarion - er, started a contest: "Make me a kick-ass commercial," Kevin Johnson intoned from on-high, "and I will hook you up with some serious photog schwag!"Cries of excitement followed this grand challenge; shooters began scribbling ideas on old tape labels and one guy fashioned a diorama using nothing but floorboard french-fries and tiny bits of scrim. In the end, however, only two (2!) submissions rolled in. That may sound like less than a groundswell, but considering the effort such a production calls for - not to mention the cruel and unusual critiques that would surely follow - it's understandable why many a lenser were afraid to try...But enough about me - THE ENVELOPE PLEASE! 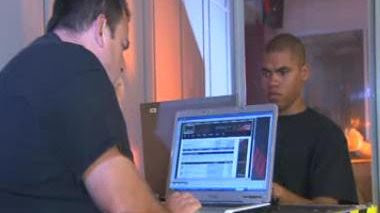 And the Winner is.... Richard Adkins! Yes, THAT Richard Adkins! Seems the artist also known as Rad isn't content with traversing the Carolinas for broadcast powerhouse WRAL - now the dude's a director! His polished spot took the Grand Prize handily, no doubt for it's crisp premise, back-lit extras and slick execution. In it, Adkins envisions a veritable b-roll HQ, a bustling nerve-center where workers toil 'round the clock in lenslinging assemblage. This ad has it all! Minus of course a cameo from a certain Greensboro-based blowhard... Hey, Adkins - have your people call mine next time! We'll do lunch! 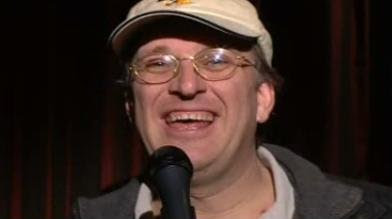 Speaking of cameos, it's the singular performance of a New Zealand deity that lies at the very heart of our inevitable runner-up. Stephen Press, narrowly revered as CameraGOD on many an on-line message board, takes the stage with little more than some index cards and gaffer's tape around his wrist. What follows is a cringe-inducing bit in which our nearly breathless steadi-cam operator blurts out the kind of inside one-liners that would make even a tripod lifer like myself groan. All goes unwell until an off-screen voice informs our hapless glass-hound he's barking up the wrong forum. In a word, Brilliant!

Now if you'll excuse me, I have to go rethink my dream sequence. The scrim holds up fine under the lights, but the french fries are starting to sag.
Posted by Lenslinger at 10:37 AM 1 comment: 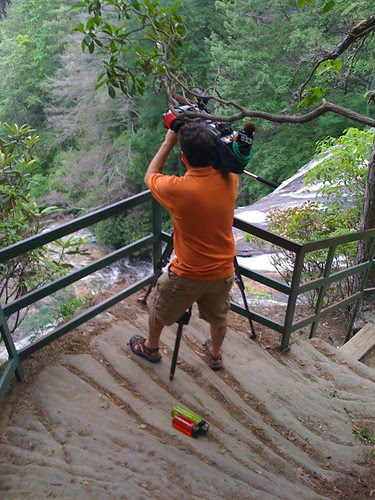 Nothing overly eloquent here, just a pretty picture of an old friend. Joe Avary, better known as 'Joey Flash' left the fertile plains of El Ocho more than a year ago in search of higher ground. He found it in Asheville, that leafy enclave nestled in the mountains of Western Carolina. There he's carved out a gnome-like niche, slinging lenses, tweeting incessantly and on occasion, chewing on the longview. Won't you take a moment to dig it with him?
Posted by Lenslinger at 10:15 PM 1 comment: 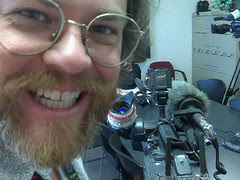 It takes a certain personality type to stick with this career, a rugged individual undeterred by indifferent officials, tragic accidents or - URP! - Happy Meals. Me, I've been doing it for damn near two decades. In that time I've noticed a pattern of behavior in the best of the vets. Cynicism. Giddiness. An affinity for distance. That's not so say we're ALL embittered drifters. Some of us is quite social! Why even in my tight circle of lifers, I know guys (and the occasional gal) who don't need logos to hypnotize the masses, Honest to God showmen who wandered behind the scenes and found they dug the view. That's not to say on-air talent doesn't have its place. Hey, some of my best friends are reporters! But if I'm going to be stranded on a desert isle or stuck in an elevator, I want not scribes in my tribe but seasoned shooters. At least those Prima Donnas know how to use a Leatherman! 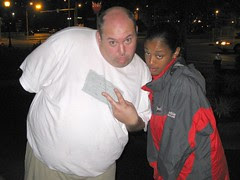 But, alas, the breed is evolving and it's gonna take a lot more than a fancy pocketknife to alter our DNA. These days, it's not enough to haul gear and ass in heavily decorated chariots. It's not enough to wrangle lamplight, bend time-lines or drive like a fireman. It's not even enough to field-strip your lens on the edge of a hurricane. No, to get ahead in today's shooter circles, you have to bring story germs to the morning editorial, connect soundbites with actual sentences and quiz new widows all by your lonesome. Yes, it can be done. But the transformation from artistic roadie to utility player is forcing some press conference vets to seek a higher podium. It's not uncommon to watch a fresh eyed youngster give news shooting a go, only to run away screaming. But now I'm seeing folks whom I figured would die with a station logo on their tit leave the fold for jobs that don't involve live trucks or nightly deadlines. That's a drag... 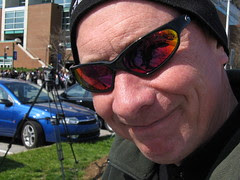 But there is hope. For every grizzled shooter that's hightailing it to another industry, there are easily a dozen more that are quietly holding on. But with shrinking budgets, diminishing gizmos and inflated expectations, The Job just isn't as fun as it used to be. That's not to say there isn't good television being made out there. But more often than not the photog's role is being marginalized - or simply stretched beyond recognition. Some folks call it progress - but they ain't got tripods in their trunk. Those that do pretty much thought they'd seen - and shot - it all. But few of us expected the upheaval that is now upon us, not when we were all sitting fat dumb and happy back in - GULP! - the good ole Nineties. Who knew? Not the photogs - we were all too busy making slot - knowing that, like Janet Jackson, the newsroom suits only want to know what we've done for them lately. So if there's a news shooter in your life, buy 'em a drink, won't ya? Chances are their workplaces aren't what they used to be. If they are, that will soon change, for highly skilled artisans were never any match for a ballyhooed new paradigm.

Now if you'll excuse me I gotta teach this intern how to power up the auto-cam. Pretty soon she'll want my keycard.
Posted by Lenslinger at 6:58 PM 5 comments:

Fire in the Sky

Longtime readers of Viewfinder BLUES may be wondering why I haven't kvetched about the elements this summer - as it's my annual inclination to whine like a leetle girl every time the thermometer starts to throb. Truth is, it hasn't been that bad. Sure it's been warm, but we just haven't experienced the kind of lung-sucking sun butter so common to a Carolina Summer. That is, until now...

August is upon us and - judging from the way street signs are melting across the Piedmont - it's pissed! Like one of those cinematic spaceships that hovers over whole cities, an amorphous monster has settled over much of the state and it won't leave until pumpkins dot the fruited plain. Exactly how long that will be is still unknown - but it hardly matters, since time tends to creep when your underwear gains weight. If that's - ahem - too much information, understand I'm still still a little giddy from crisscrossing the county in search of sunstroke. It's a gig I knew I'd get before I ever left the air conditioned confines of my suburban lair this morning, for seasonal heat is just the kind of soft news best collected by a kind of hard-case. Yes, when it comes to turning froth into something watchable, I'm your voyeur of choice...

Actually Weaver's equally capable of harnessing the sun, though if the truth were known he'd rather escort a reporter to their very first Emmy than laze in the haze with with a loser like me. That's cool - we all have our personal thresholds. Besides, the big lug shot me a solid early in the day - interviewing a sign-wielding pro who sweetened my timeline with his year round cheer. If that weren't enough I stumbled upon a family of mulch-spreaders, some kindly Snow-Cone pushers and an eloquent chap in questionable bike shorts. Before I knew it, I'd committed it all to disc, including a few artsy sun shots I bagged in El Ocho's parking lot. Of course those who stack the shows were less than whelmed by my efforts - a condition I've only encouraged by accomplishing the improbable on a daily basis...

That's when it hit me. I'm the only viewer I have to woo. Unlike the producers who groom their Facebook pages or the assignment guy who only wants to know where I am should the Earth spin off its axis, I'm the guy with the wandering eye. And so too are you dear photog, for if viewers knew how much of what radiates from that box in their living room was put there by some schlub with stevedore's knees and perma-squint, well, they probably wouldn't care - as long as a disembodied voice they recognized led them through each and every soundbite. But here's to you anyway, pit-stained shooter, for your moxie makes the home audience squirm and not just because you've raised your arms in victory while packed into a crowded elevator. Yes, you deserve any false sense of pride you can possibly muster and at least a week or two of vacation come September. For now, hold your hands and head high and let 'em know who the real newsmaker is...

On second thought, lower your extremities. Either that lady beside you is working on a hairball, or her throat just closed from the impact of your stench. She hits the floor and there's a good chance you'll be an air-conditioned freelancer by week's end. Then who ya gonna sweat on?

(Photo by Sean Browning)
Posted by Lenslinger at 9:29 PM 3 comments: