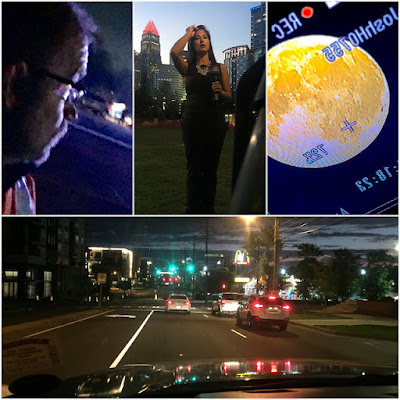 I’m not sure if you've noticed, but Charlotte is crawling with news crews. I know, for I count myself among them. The Queen City is a hard news market; chases, blazes and slayings dominate the day. It’s a meat grinder, all right, and if you're not careful, it'll slowly chew you up. So the next time you pass that camera crew on the corner, consider what those crusty souls behind the glass have been through and what they've learned along the way…

They know all the places to go for that killer view of the city’s skyline, but they made me promise on my zoom lens not to tell you where there they are.

They know that strip of sidewalk outside the Mecklenburg County Courthouse where a marked news unit can hop the curb and park. It’s a longstanding practice, but it still feels weird doing so with all those cop cars around.

They know Greg Olsen will always give them a decent soundbite in the Carolina Panthers locker room - after a big win, or following a soul-crushing loss -- because Greg Olsen is a standup dude.

They know what it's like to hover over the city in a helicopter as something beneath them burns; and they know how it feels to watch the same chopper fly toward that blackening plume, while they're stuck sit in traffic on I-77.

They know what tear gas smells like. Many last tasted it in 2016, when the Keith Scott protest turned deadly and Crown Town came undone. By the way, the footage you’ve watched of the madness that week exist solely because some loners with lenses chose not to run.

They know whether to race to the seventh level of the Daily Parking Deck or across the way to the Airport Overlook Lot, depending on what runway the troubled airplane is trying to land on.

They know how long it takes to get from the Spectrum Center's semi-secret Media Entrance all the way to center court. (Five to fifteen minutes, depending on your attitude, how much gear you have with you and the chattiness level of the metal detector lady.)

They know that if they work a Friday night shift, misfortune will be their plunder. They’ll end up somewhere along Beatties Ford or Sugar Creek or Albemarle roads. They know when the cop cars leave the scenes, they should, too.

They know that, for whatever reason, the sunrises at Charlotte Motor Speedway are nothing short of spectacular. Ask any morning crew that’s done a Speed Week preview there and packed up a little slower than usual.

And they all know that in fifteen months or so, the Republican National Convention is going to slam into Charlotte and that they'll be there, riding the chaos that will surely come with it.