Take to the Lake 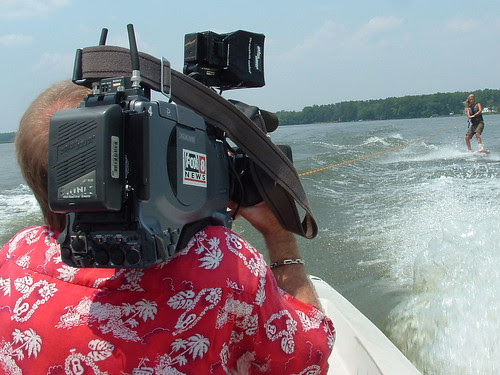 What does a Nascar legend, a former Survivor and your own weary lenslinger have in common? They all three let reporter Caron Myers convince them to take to the lake this morning in the name of news. Seems a once bone-dry reservoir in Davidson County is now sloshing over its banks with swollen rainwater, distracted pleasure-craft and the occasional patch of gnarly debris. Sensing Aqua-Man would be a no-show, Jeff Varner and I sacrificed our own morning of violent crime follow-up to skim the surface (but not get to the bottom) of High Rock Lake. 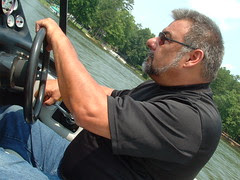 That's where Chocolate Myers comes in. Nascar's most famous gasman happens to be an extended member of the El Ocho family and since he's also the owner of a shiny new speedboat, it made sense to skim the backwaters with the late, great Dale Earnhardt's beloved sidekick. True to his calling, Choc hurtled his high-octane craft from end of the lake to the other, showing an irrepressible urge to turn only left while his wife's goofy co-workers held on for life and lens. Minus a few bugs in my teeth, it was not a bad way to spend a Friday morning. 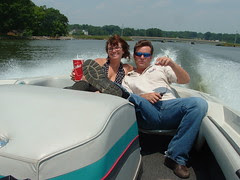 But it wasn't all fun in the sun. While Caron and Jeff lounged in the back and threw gang-signs to yours truly, I crawled over every inch of that speeding skiff, pointing my lens both fore and aft as I gathered the on-board vistas I'd need for our evening dispatch. By the time we made our way back to the slip, I had all the strobing close-ups, sun-dappled wide shots and high-speed footage I'd need to flesh out the most ambitious of watery reports. Best of all, at no time did I drop my station's high-dollar fancy-cam into the drink - a sensation I unfortunately remember all too well.

Dig on this picture of CNN's Sumi Das and freelance photog Mike Horine, as they execute a live shot outside last week's fatal Elks Lodge building collapse in Clinton, Missouri. The out-of-towners escaped unscathed, but a local news crew got thrown in the pokey for failing to obey the reasonable direction of the Missouri Highway Patrol. Police arrested KYTV reporter Sara Sheffield and photog Cliff Erwin virtually during their live shot! The two were reporting from the public side of the yellow tape, within an area where police were allowing the public to congregate. However, law enforcers on scene wanted the TV crew to move to a space set up for the media. When the two declined and proceeded to go live, cops arrested photog Erwin and allowed Sheffield to finish her on-camera remote before slapping the cuffs on her. Both took a ride downtown, received misdemeanor charges and were released.

Why should you care? Well, if you don't make it a habit of loitering by calamity's edge, then perhaps you shouldn't - but if you believe in an unencumbered press, consider this: Our democracy works best when journalists are allowed access to both the mundane and the diabolical. Fatality aside, this case ranks somewhere in the middle and the KYTV crews should have been granted a vantage point equal to that of Lurene and Larry Looky-Loo. They were not. Instead, police insisted they report to a special 'press area' where armed constables could make sure they didn't upend the bedrock of the Republic by getting a clear shot of a damaged Elks Lodge. Thanks fellas, Superman can scratch Clinton, Missouri off his to-do list!

Now, I'm not proposing members of the Fourth Estate be allowed to run amok over evidence, crime tape and first responder. But where the public is allowed to gather so should the press - be it a sleep-walking scribe with a filled-up scratch-pad or a tricked-out techie with a lens-extender and a satellite dish. It seems simple, doesn't it? Tell that to the oak tree with the badge pinned to his tit. He'll most likely point his walkie-talkie toward a far-flung spot and suggest you follow it. Sometimes when you have no choice, but no news-stalker I know walks there without a fight ... or as KYTV attornies suggest, 'a quiet discussion'. Spoken like a lawyer, one whose role it is to dodge and obfuscate, not roll up and report. Fine - we all got jobs to do. Just as the deputy has the duty to keep a crowd at bay, the news crew has to right to penetrate the onlooker scrum so those not present can endure the view as well. That's usually how it works, but when testosterone and flashing lights reach a certain temperature, roadside logic evaporates and you can quickly find your camera and your self being pushed back to absurd distances by people who own every wretched season of COPS on special-edition DVD.

Just don't expect the magistrate on duty to appreciate all that delicious irony. Those guys can be real crab-asses...

(UPDATE! Follow this link for copyrighted pictures of the arrest...)
Posted by Lenslinger at 7:40 PM 4 comments: 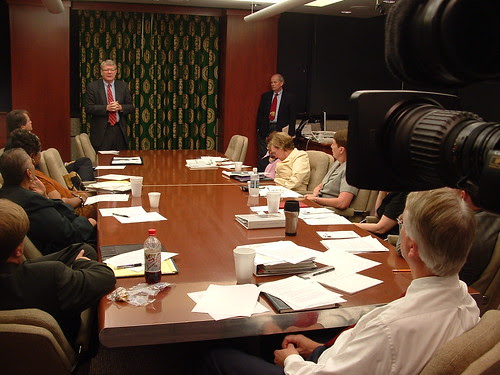 Behold - I give you every photojournalist's worst nightmare: the protracted city council meeting! Actually, any static gathering of policy wonks is enough to make the average news shooter yearn for a Bigfoot sighting to run on. It's not that we behind the lens don't appreciate the machinations of our democracy - it just makes for lousy television! Still, one can make art of assembled bureaucrats, if there are enough reflective surfaces in the boardroom. In today's case, the desktop was buffed to a dull finish, forcing me to search for obsessive paper-shuffling and contorted facial expressions to fill the aesthetic gap - not an easy task when your eyes are glazing over. Luckily, these civil servants kept on target and hammered out the city budget just before I resorted to making shadow puppets with my camera's top-light. Whew! Remind me next time to grab that tattered paperback out of Unit 4 before I allow myself to be sequestered with the City Council. After all, these fine folks aren't nearly as scary or entertaining as the County Commisioners' monthly tantrum-fests. Those people are whack!
Posted by Lenslinger at 9:52 PM 7 comments:

Ridin' Shotgun with The Man 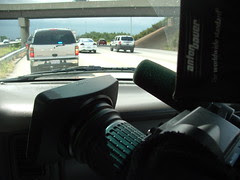 Unlike a lot of kids, I never wanted to be a cop. Sure, the uniforms are swell, but something about the idea of occasionally being shot at always made me rethink any aspirations of law enforcement (Those who knew me as a sordid youth would chuckle at the very idea anyway, as I was far more gifted at eluding authorities than fostering confrontations.) Despite my seedy beginnings however, I’ve developed a real respect for those behind the badge. I even used to donate regularly to their cause through a series of hefty speeding tickets, but with my thirties came an awareness that I’d like to keep my license for a little while longer. Thus, I slowly weaned myself from driving like a terrorist. Age will do that, you know. So will a wife who threatened to gouge my eyes out should I bring home yet another crumpled pink piece of paper from the Highway Patrol, but let’s not go there, shall we? 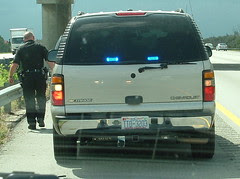 Instead, let’s ride along with the PO-lice. It’s something I recommend every lead-foot should try, as nothing will slow you down faster than witnessing the white-hot intensity of a committed traffic cop behind the wheel. A few hours ago, I did just that. It was only a small part of my day, but since it was slightly more intriguing than my visit to the city’s water department, I thought I’d talk about it a bit. (Got a better idea? Send it my way; my muse is on life support and I’d be happy to take requests.) Meanwhile, let me tell you what I know about the Thin Blue Line. These dudes are serious! What with their tricked-out engines, clandestine spotters and crackling radios, you’d think they were getting paid to keep our highways safe. You certainly couldn’t pay me enough. I’m perfectly fine with turning the breakdown lane into my own personal parking spot, but only if I have some TV station’s fancy-cam to hide behind. Any other roadside duties smack of responsibility and I sir, will have none of THAT. 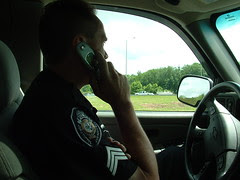 The same couldn’t be said of Sergeant Scott. This grizzled veteran of the force was more than happy to tear himself away from a stack of paperwork and chauffer me around for awhile. My mission: collect enough footage of the interstate speeding crackdown to fill forty seconds or so of early evening airtime. Not very noble I know, but a photog’s gotta eat. Thus, I saddled up with Sergeant Scott and found him to be a gracious host and a damned fine driver. That’s important - as we zipped from one blue light cluster to another along a stretch of I-40 known locally as ‘Death Valley’. As one who’s responded to more than a few fatalities along this ribbon of highway, I can tell you - they call it that for a reason. But a spooky name ain’t enough to slow most people down. Neither is passing a half dozen swirling blue lights, apparently. Despite the high-profile crackdown in progress, more motorists than we could stop screamed past at twenty-plus miles over the heavily posted speed limit. 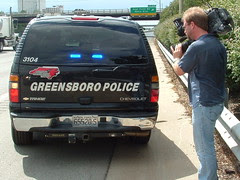 But I’m not complaining. Rather, the commuters’ collective insistence on urgency made my silly job quite easy. Before I knew it, I had enough speeders in the can to fill half an episode of COPS. Shiny sports cars, muddy SUV’s, even a few unwashed work trucks fell victim to the radar at hand. I only wish I didn’t have to get out of the police cruiser to obtain the proper angles. Trust me, few scenarios are more squirm-inducing for a photog than inching up behind an officer as he approaches an irate motorist. No one like to be pulled over, after all. The only thing that could possibly make it worse is spotting a schlub like me over the officer’s shoulder, pointing a big lens your way and insuring your vehicular transgression will soon be fodder for the region’s masses. Why, it’s enough to the kindliest of schoolmarms launch into a screeching, apoplectic hissy. Not that that happened, but if I disappear tomorrow, there’s an elderly elementary teacher in a red Volvo who’s gonna have a lot of hard questions to answer. Now, if you’ll excuse me, I have to go rub the serial numbers off my zoom lens. That’s legal, right?
Posted by Lenslinger at 9:09 PM 2 comments:

"Things get serious when you touch me."

... Those words of wisdom from WRAL's Richard Adkins, who - like myself - has documented more than his allotment of drunken revelry. Sports celebrations, raucous concerts, street parties - all can be perilous for those of us with viewfinders stuck to our faces. It's a lesson I learned early in my career when I wormed my way to the edge of the stage at a Beach Music Festival and found myself doused in love, affection and lukewarm Budweiser. Now, as a public service , Adkins lays down soe ground rules all those locked in bacchanalian frenzy while seeking face-time:

"You’re welcome to jump up and down, scream, cheer and make a fool of yourself in front of my lens, in fact, that’s your role in this. But don’t touch me, grab me, grab the camera or pour beer on me. None of that is going to get you on TV, and it might cause me to introduce you to my friend 'The Flying Elbow'".

Is it any wonder we photogs keep our other eye open?...
Posted by Lenslinger at 5:49 PM 3 comments: