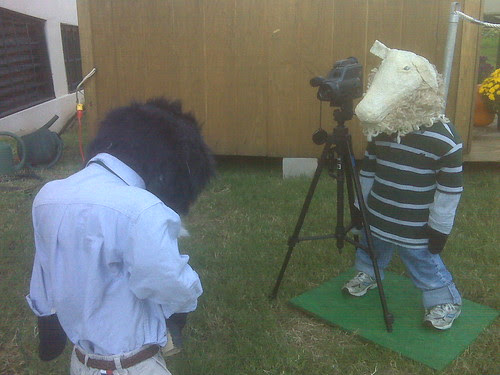 We were seconds away from our live shot when the drugs kicked in -- but, really, THAT'S a story for another post. What I want to talk to you about tonight are dreams. I have 'em all the time: irrational passion plays, nonsensical operas, psychedelic slide shows. Out of nowhere they catch my mind's eye and before I know it I'm scaling the drapery in some vexing quest that can never be fully explained to a spouse who has to be awake in a couple of hours. I blame my job - as most every scenario I end up wrestling the ottoman over starts off with me and my gear traipsing over some twisted news-scape. Look - those trees are holding a press conference! And if I'm not mistaken, the ribbon those aardvarks are cutting is made of frozen gravy! Good thing I can transmit it all back to the mother ship with this handy neon egg-beater suddenly growing out of my forehead! How else would I make it through that long plastic hallway in time enough to stitch all those eyeballs and diaries together?

Don't answer that. Just know that when I do turn in, the deadlines keep coming. Why else would I wander through dreamland with a hundred pounds of the finest recording equipment 1974 ever chose to forget? I mean, it's pathetic enough trudging through this realm with a viewfinder in my face. Must I do so from the sanctity of my thirty year old Shazam(!) pajamas? (Don't ask.) Better yet, get the hell out of my dream! Must I share everything with you people? Can't a fella craft paragraphs that go nowhere withOUT insisting tens of citizens waste their time trying to decipher what are merely finger exercises? Again, your input is far from needed, as I'm obviously just choosing which delusion I'll use to scare the therapist I'm not seeing. Otherwise, how's a guy like me supposed to sleep? You know how many times I've slept-walked from crack-house to palace with faraway eyes - only to end up in some edit bay haze with only a panicky page from a producer down the hall to me distort my sordid torp ----

ZZZZZZ.... (Thanks to Rad for the disturbing photo!)
Posted by Lenslinger at 9:52 PM 2 comments:

You ever park in some professor’s spot, grab your gear from the rear and scamper across campus with your dignity and lens akimbo? I did just this morning and the inelegant sprint was indicative of the day to come. But I’m getting ahead of myself... Hey, have you ever burst into a small room to find a friend of yours grilling the ex-President of Pakistan? I did, about forty-five seconds after jacking that Reserved space in front of Elon University’s Alamance Hall. Pervez Musharraf was well into his response by the time my own camera kicked into gear. When it did, I fell into the eyecup, brought the former world leader into sharp focus and felt my own senses dulling. No bother, I thought. I’ll just capture everything that moves, drag it back to an edit cave and let some other neanderthal ponder its contents. After all, I had a reporter impatiently waiting back at the station... 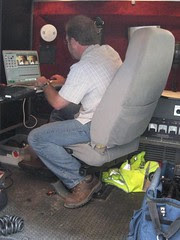 You ever triangulate sketchy directions with your knowledge of the topography while a better dressed companion talked to a man about a (stolen) horse? I did, just after lunchtime and for a few minutes there, it felt like it was going to happen. See, when a fellow faxes over an ‘urgent press release’, you kind of get the feeling he wants to talk on television. Not always so, I’ve found. Hey, you ever bum-rushed three Mexicans and the horses they rode in on? Brandon Jones and I sure did, confident the gauchos before us were fully expecting a camera crew to come a callin’. Only after a few minutes of international shoulder shrugging did we discern these fine fellows didn’t know what the hell we were rambling on in English about. That was odd, as they were in the very pasture we were told to go to. One even handed me his cellphone, whereupon I listened intently to the man’s superior attempt to clear up the confusion by yammering to me in broken Spanglish. By the way, what IS the Spanish term for ‘mid-life career change‘ anyway?

You ever cold-call a furniture executive and tell him you’re about to put him on television? We did, right around three P.M. and before the gentleman could wiggle out of the idea, we were in his building’s elevator. That’s how it goes when your stolen horse story rides off into the sunset, leaving a big chunk of black in your very next newscast. Thus, Brandon and I stormed a High Point tower two hours before the story we were about to begin shooting was scheduled to air. Luckily for us, The Suit in question coughed up enough answers to feed our jones and within ten minutes we were back on the street looking for a backdrop to fill. We found it just outside a certain showroom. The sales staff was irritatingly giddy at first, but with a few heavy breaths they calmed down enough to speak in complete sentences. Good thing, that.

Hey, you ever popped the passenger side of a live truck up on the curb just so the mast you were about to raise wouldn’t lean over and crash into a fourth story plate glass window? It was the least I could do as I prepared to execute the live remote that would no doubt push our broadcast straight to the top of the never ending ratings war. Once both left sided tires rested firmly on the sidewalk, I commenced to flip a strategic series of switches while the tony Mr. Jones turned fresh soundbites into a script. Minutes later, I hunched over a steaming Mac, splicing and dicing random shots of pedestrians and settees into a haphazard news package. I’d like to say I did it all by my lonesome, but it wasn’t so. Knowing I’d not yet edited Final Cut Pro in a truck, The Mighty Weave materialized like some newly skinny Obi-Wan. Nary a Jedi was beheaded in the ensuing minutes, but without a few tips from Weave, I may very well have thrown myself on my light saber. Ya know, if I HAD a light saber.

Speaking of which, you ever looked back over your career and realized that, like a certain space trilogy, the script was stilted, the actors bad and the effects weren’t necessarily special? 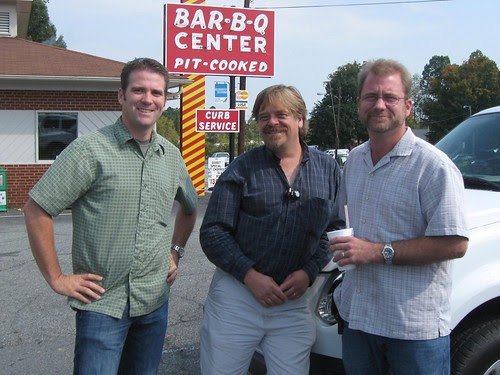 It's not often three TV News photographers get to take part in a sit-down lunch, but that's just what happened when Weaver and I made a mad dash to Lexington to break (corn)bread with the legendary lenslinger known as 'RAD'. Richard Adkins tends to traverse the state, creating potent television for the powerhouse affiliate WRAL. He's a fierce competitor; normally when I see him it's in the heat of battle. Which is why it was altogether pleasant to meet him on neutral ground, where neither of us had to worry about what shot the other guy was getting. We laughed, we whined, we hoarked down some righteous swine. But no sooner had we gathered than it was time again to go, for the three of us were, as always, on deadline. Still, the photog fellowship was refreshing: full of tech-talk, war stories and more than a little mutual admiration. If that's so wrong, I don't wanna be right, for I enjoy RAD's company almost as much as I enjoy his work.

Remind me of that the next time we're jostling for shots of the Presidential Christmas Tree, some celebrated wreckage, or the Governor's every utterance. Chances are I won't listen, but remind me anyway.
Posted by Lenslinger at 10:56 PM 1 comment: