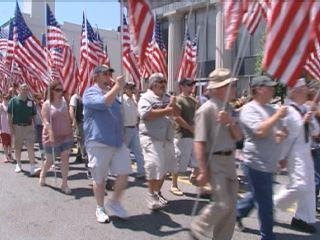 Despite my advanced degrees in Cameranthropology, I still gotta work the occasional holiday. Come to think of it, maybe it’s because of my Doctorate in ENG that I’m constantly called upon to make television on days when most people assiduously avoid watching it. Whatever the reason, I observed Memorial Day the way I do most every day - with a fancycam jammed in my face. Memorial services, parades, politicians; all passed through my lens with lessening degrees of dignity. That’s fine by me, as a stiff pay differential was placating my every other effort. That extra cash must have come from the producer’s own pockets however, for they demanded Nicole Ferguson and I turn two (2) stories on our subject; a reasonable enough requirement until you consider we were covering Thomasville’s Memorial Day Parade. Oh well, if that’s what it takes to end my day, strike up the band. I’ll still go home and wring the experience for meaning; for your above average lenslinger isn’t just satisfied with double-time pay, he needs to squeeze it for a blog post as well. How else is he ever gonna stop referring to himself in third person?

It’s Memorial Day and the good folk of Davidson County turned out in force to cheer on young and old alike in the Thomasville Memorial Day Parade. That’s an awful lot of good will, but stand in between your average Mee-Maw and the float carrying her grandbaby’s cub scout pack and you too will feel the smite of a leather-clad bible to the back of the head. Now hold this while I staunch the bleeding.

Summer‘s here. Sure, we’re still weeks away from the ungodly humidity that makes this part of the country one sweltering pit-stain for three months a year, but today as I waited for Senator Elizabeth Dole to polish off a rubber chicken plate, the rivulets of sweat running down the crack of my fanny pack reminded me just how very much I hate summer in the Carolinas. That, and politicians.

A heavily-logo'd TV news camera can do more than record audio and video. It can reveal character, incite riots and spark the most unexpected of reactions. I was reminded of this today when a Vietnam Veteran drenched in leather, metal and spikes got right up in my FACE - and tearfully thanked me for covering this particular wreath laying. Dude, Thank You.

If you have only ten minutes to set up a live shot, it will take nine minutes and fifty-six seconds to do so. I pulled up to our live location well past 4:50 PM, quickly raised the mast, set up the camera in seconds - then spent the rest of the time dickering with the transmitter dish. We were there of course when they punched up our shot - as was the screaming freight train that appeared out of nowhere to obliterate whatever Nicole had to say.

Did I mention it was double-time?
Posted by Lenslinger at 10:02 PM

Gotta love working the holidays. I was blissfully off and sweating with a Koontz novel at the water park while the pinchers ran amuck -- Some people's children! Geesh!

My first reaction to your blog was indignation and retaliation. That, however, would be stooping to a level I do not wish to achieve.

Yes, maybe Mee-Maw was there, but there was no cub-scout float to be cheered for, nor did I see any leather-bound or otherwise Bibles thumping about. What was there, in truth, on a hot and drippy day were the educated and the uneducated alike-Democrat and Republican-believer and un-believer, not divided by their differences, but united in the common desire to honor those who are willing to sacrifice comfort and luxury for their country. What was there were vehicles carrying the families of nine servicemen and women who had been killed in war. What was there were veterans from WWII, Vietnam, Korea, and both of the most recent and current wars. What was there was a van from a local nursing home carrying what is left of the once young and healthy bodies of aged veterans. What was there was a float (two of the few)carrying a live Iwo Jima reenactment, and one POW float with a very sobering bamboo cage being it's chief feature. What was there were representatives from each branch of the military. No, it wasn't the Macy's Thanksgiving parade, nor was it a parade heavily featuring random nothingness. It was what it was porported to be-a parade in memorial.

Our military serve for those who appreciate it and for those who do not, for causes they may or may not support, not blindly, but because they are part of a greater whole. They serve with dignity on foreign soil, and I applaud them, for one day, they may serve on home soil.

I realize it's just too much fun to denigrate a small town with small town values. Don't forget that along with MeeMaw and her cubscout, Thomasville is also home to a citizenship rich in patriotic passion, to a Pulitzer winner, the home-place of a NYT bestselling author, and many more educated and culture-loving Americans.

Don't look through the narrow end of the lens. You'll miss too much. Be a larger and more generous person and recognize and value the diversity in others without belittling it or them. Recognize that differing opinions, values and viewpoints than your own have basis and don't become so narrow in your liberalness that you lose your credibility to your audience as a whole.

I was an audience to Thomasville's parade, and I was proud to stand and honor the largely veteran-based parade, (even though it was hot and sticky).

You take my late night stabs at levity as naked derision. It is not. As a Southerner and ex-SailorI am none too removed from the yokels I poke fun at and wish not to denigrate any particular breed. I actually a fan of Thomasville, having lovingly profiled your Pulitzer Prize winner in question. Why just yesterday I dropped about a gallon of sweat promoting your fine 'burg. It's funny you cite my liberalism, as I'll be chastized for my right wing slant tomorrow. You're right about one thing though. It WAS sticky hot.

You just can't please everyone. If that was an olive branch, I accept on behalf of my adopted town. (actually, I think most conservatives and liberals are not as rank as we each suppose the other to be.