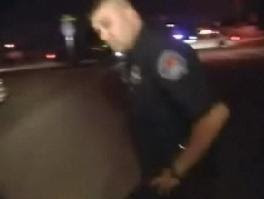 Some folks are camera-shy. Others are just assholes. Clearly, this officer belongs to the latter group - as for no real good reason, he went all Kimbo Slice on KOB-TV photographer Rick Foley. Exactly why isn't certain - but judging from the footage, the unidentified officer didn't like the cut of Foley's jib, for without so much as a ceremonial bow, Albuquerque's Finest declared a spontaneous cage-match, Pay-Per-View audience not included. Ah, but Foley - a 25 year veteran - did manage to press 'Record', thereby documenting all that hapless grappling. But it didn't end there! Officer Hostile here cuffed and stuffed Foley, searched his car and refused to divulge his badge number. But why, officer? 'Cause Foley's got a cooler gig than you? Tell you what, with a little cross-training you too can join our ranks and suffer the wrath of the occasional despot in blue polyester. Simply report to admissions desk at the Lenslinger Institute and leave your name: Schmuck! (Don' t worry; they'll know how to spell it...)

Addendum: Upon review of extended video, I'm issuing a reluctant Photog Putz Penalty. Foley didn't deserve to be tackled but his dripping smarm at the top of the clip only cranked up the Stupid. Remember: When dealing with cops at 3 in the morning, it rarely pays to be so lippy...
Posted by Lenslinger at 9:49 PM

This is the most ridiculous thing I have ever heard of. NOT because you posted it, but because you (A VET) believe it. Puhleeeze. The officer probably asked not once but probably twice for him to move, playing dumb like we TRY to do he obligied. When the coast was clear, he pulled out his "$50,000" camera and proceeded to video it. Brother, "I do not care if you have been shooting for 100 years" The police had or shall I say asked you to move to the staging area and you refused. Done this for 12 years and I know the drill.
NO SYMPATHY FROM STEW'S COMPETITION. Still love Ste though.

don't kid yourself. listen to the conversation before said Jughead attacks the shooter. APD will likely find a way around this thing saying the photog was in the wrong. Still, I don't recall a photog ever harming someone physically with their video. Remember, cameras don't kill people-jackass, over-reactionary cops with muscles and guns do.

Sure, the photog loses a few points for how he handled the situation, but regardless, if another citizen, (the woman asking him to put the camera down) was in the area, he had every right to be there too, and the cop knew it.

When will the men in blue ever learn?

Gotta go with Stew and Turd on this one...the photog could have handled it better, but he did nothing to warrant an open field tackle.

Just another bully cop who thinks he's above the law.

do you not think the officer gave the shooter more than a little attitude before the tape started rolling? enough attitude that the photog felt the need to ask for the officer's badge number before the sh*t went down?

and regardless of lip from the photog, that wasn't an arrest, it was a BAR BRAWL. completely unjustified, the cop knew he was in the wrong, hence not responding when asked what his name/badge number was.

although, i CAN see the direction the officer and the department are going to go in: the photog shined his spot light in the officer's face and the officer will probably say he was blinded and felt threatened.

Just a tip for those that may find themselves in this situation in the future: today's cameras do pretty well in low light, so shining the mini-fill in someones face isn't necessary. That's just to avoid the 'blinded and threatened' possibility. Mine is usually at a 45 degree angle when shooting this kind of thing.

As cadencefilm suggests, the officer probably gave a bit of attitude before the camera was rolling. I have to wonder at the officer's motivation, since he was hanging around after delivering the directions. Seems to me he was waiting for the photog to stow his camera before the beat-down.

I haven't had any run-ins with law enforcement like this, but I usually make first contact with officers without the camera rolling, finding it more conducive to figuring out whether I need to lose more sleep over the scene or not. This video leads me to rethink that.

I tend to have a trusting attitude towards law enforcement, since my dad is a deputy sheriff, and, so far, all the law officers I've run into have been professionals.