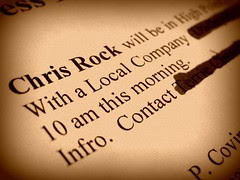 See, here's the thing: YOU KNOW Chris Rock ain't in town just as well as I KNOW Chris Rock ain't in town. But when your company issues a 'Press Release' stating (and I quote) "Chris Rock will be in High Point previewing his new movie..." well, you set more than a few news wheels in motion. It starts in the newsroom, where someone whose job it is to decipher incoming faxes suddenly begins speaking in tongues known only to Pentecostal grifters. Now, before I can even duck under my desk, said sinner locks eyes on me and the loopy arm movements and broken syllables increase tenfold. At this point, all logic is suspended - for while everyone in the newsroom realizes the chances of Rock being on this side of the state line are damn near nil, we're obligated to assume it's true, lest we blow it off only to see the popular comedian yukking it up at six on another station.

From here on out, the adventure's mine. Sure, someone from the Art department begins scouring celebrity websites for a suitable image and a few producers debate what movies they should include in the filmography that will follow our sure-to-be exclusive interview - but I'M THE GUY hurtling down the interstate, triangulating surface street stoplights while digging fresh batteries out of the glove box for my digital camera. By the way, you ever run a Cadillac full of elderly furniture shoppers off the road 'cause you were dickering with a memory card when you should have had your mind on the merge? It's a lousy feeling - especially when you finally arrive at prescribed destination only to find the only Chris Rock on the premises is the cardboard cut-out you're not allowed to shoot.

Now don't get me wrong: I like you guys! Your company makes an interesting product and we've done good work together in the past. I'm equally stoked that a big name like Chris Rock made note of your firm in his new film. In fact, I'm happy to do a story on it, but this kind of subterfuge wastes my time and makes us both look silly. It's akin to me calling you up and saying, "Hey, Katie Couric is in town and she wants to tour your plant! Quick, clean up - she's on her way over RIGHT NOW!". Now, I would never do that - and not just because I have absolutely no affiliation with the leggy CBS anchor. Speaking of leggy, that PR lady you sent to intercept me at the movie theater was gorgeous! She could have been a toothpaste model, which would be damn handy since it kinda feels like you guys took a dump in my mouth. Un-Cool. You know, were I a more industrious sort (and not some TV news geek with questionable driving habits), I'd take your little press release around the country as a sterling example of how companies can screw themselves out a well-deserved press opportunity. You know for that kind of presentation, I'd need someone to front it, someone funny, famous and full of street cred...

Someone like, Chris Rock... I hear he's in town.
Posted by Lenslinger at 9:24 PM

Go ahead. Name names. They deserve it. But I presume there was a phone number on that press release. Did anyone from the desk call to confirm the claim?

did u at least get a pic of the PR lady? that, at least, is news worthy...

We have fallen victim to this kinda grade school PR crappola. We now have a "black list" of contacts and companies that WILL NOT get any good coverage unless it involves someone getting indicted or a mass murder in their offices. Way to screw up jerks! Makes you wonder "what were they thinking?".