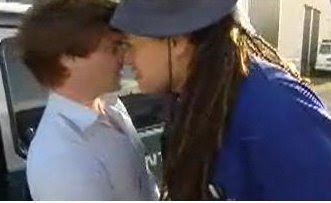 According to a strict set of bylaws I just made up, I'm unable to classify this on-camera confrontation as a Schmuck Alert - since no cameras were accosted. But one gets the feeling New Zealand reporter Matt Chisholm would have preferred a Kiwi beatdown over the reaction he got from a strangely - ahem - affection meat-cutter. But I'm getting ahead of myself. It all started when TVNZ's Close Up began investigating claims of horse meat being sold for human consumption. EWWWWW!

Anyway, Chisholm and his lenser do their due diligence - collecting evidence and recording incriminating video before they corner the beefiest of butchers. The ensuing encounter begins typically enough, with Slaughterhouse Clive denying any knowledge of said horseplay. But then, just before the two minute mark, things. get. weird. I'll let your imagination do the rest, but just know Sam the Butcher's urge to cuddle wasn't just unexpected, it was positively genius - as it nearly unraveled our inquisitve friend (who was doing so well until then!). Will this kind of press reception catch on? Hard to tell, but a nation of news crews are already testing that theory by trying to catch rising ingenue Megan Fox in anything unlawful - in hopes her response will be equally amorous. Good luck with that fellas...

(Much love to Stephen CameraGod Press for the heads-up...)
Posted by Lenslinger at 7:55 PM

Well...(don't throw things at me)...meat is meat. Americans have an aversion to horsemeat. Fine. But if they WANT to eat horse or dog or cat - why not?
Do we have to use the cute and cuddly or service to man as a barrier to food?
(now throw things at me)

Cows are cute and yet people eat them anyway. The same goes for deer.

There's nothing wrong with horsemeat (disclaimer, yes I've tried basashi once via some Japanese cuisine).

Though knowing the sort of medications that get put into the average backyard horse, I sure the hell wouldn't suggest it though.