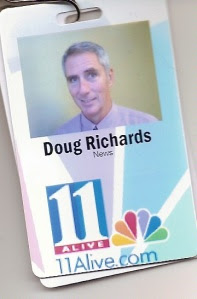 And to think I was worried Doug Richard's blog would suffer when we he went back to work. Hardly! Ever since the mind behind Live Apartment Fire signed up with Atlanta's WXIA, he's spoken truth to power with a flurry of posts that would be preposterous were they not so spot-on. This guy's on fire! And I'm not just saying that because he's heaped undue praise on me in the past. No, I click on LAF 'cause it's written by a real person - not some overblown, chiseled phony you see sleepwalking from Sports to Weather, but an honest to God reporter who knows how to play dead in a live truck, where to grub in the inner city and how to act when the shit goes down. If that weren't enough, Doug's doing it all under his real name, thus incurring the slings and arrows of every nutbag with a Blackberry in the greater Atlanta Metroplex. That takes grapes, not to mention a conscious effort never to take one's self too seriously. Trust me: it's harder than you think. In my nearly five years of constant blogging , I've more than earned the wrath of certain competitors and colleagues - simply by pixelating one lenser's opinion. But enough about my busy dance card, this post is for Brother Doug, who's found a paying gig without giving up his voice. Still not convinced? Consider his recent list of newsgathering truisms - which includes a tip so tried, so true, so trenchant - every new reporter should commit it to memory.

8.) If the phone rings at five minutes after noon, beware. It means that the newsroom managers have seen something on a competing TV station’s noon news that your station has overlooked. The phone call means you’re being asked to recoup on a story with a rapidly fading pulse. Consider waiting five minutes, then return the call. The problem may solve itself.

Quick, somebody etch that in stone before I'm forced to write it in lipstick on the ladies room mirror. Then who will be lookin' for work?
Posted by Lenslinger at 8:57 PM